From Castle St to Big Day Out 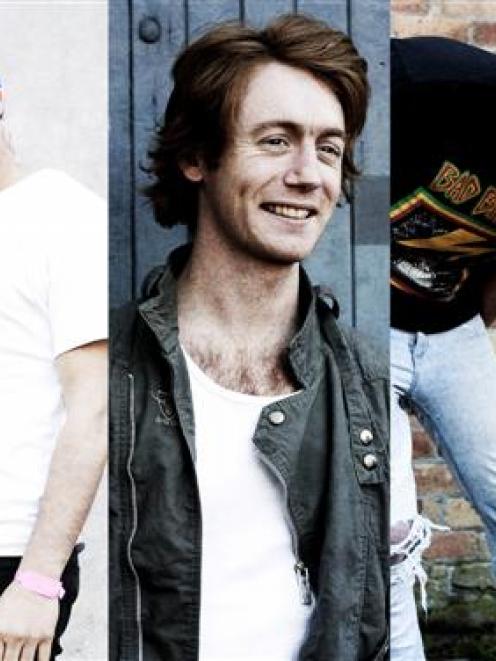 Six60 (from left): Marlon Gerbes, Eli Paewai, James (Ji) Fraser, Chris Mac and Matiu Walters.
He might be talking on the telephone, but one can almost sense the grin on Matiu Walters' face as he describes the rise and rise of Six60, a band he formed in 2005 with a group of fellow University of Otago students.

It has been a hectic past couple of years for Six60, which played its first gig outside Dunedin only in 2009.

Now the group, comprising Walters (vocals, guitar), James Fraser (guitar), Eli Paewai (drums), Marlon Gerbes (keyboards) and Chris Mac (bass), is about to play an early evening slot (4.50pm-5.30pm) at the Big Day Out at Auckland's Mt Smart Stadium, on Friday. In fact, of the acts to follow on the venue's four main stages, only three (The Naked and Famous, Shihad and The Phoenix Foundation) are from New Zealand.

"Yeah, it's been a bit of a roller coaster ride, hasn't it?" Walters says from Auckland, where he was born, raised and to which he has recently returned.

"We are excited about the time-slot ... They are really particular about who they put on the bill, so I feel really honoured to be included."

The core of the band met while residing at Dunedin's Unicol where, for a time, the tower block halls resounded with a range of chaotically played covers.

"We'd hear each other jamming up hallways. We came together and jammed out a few New Zealand classics," Walters explains, adding that the group's name is derived from a flat (660 Castle St) in which some of the members lived during their second year of studies.

"We started playing covers from Katchafire, Kora, Trinity Roots etc and from then, for about two years after that, we just played at 21sts, house parties and bars for a beer contribution. The band has been touring for about two years.

"In the beginning we were making phone calls, trying to push gigs. For our first show out of Dunedin, we called up Al's Bar in Christchurch. They said: 'we don't know who you are, so we'll put you on a Thursday night and we'll under-staff the bar'. It turned out to be a sell-out. The same thing happened in Wellington and Auckland.

"We had a bit of pressure from friends and family to put something together. Over those few years we'd written a few of our own tracks so we decided to put out an EP, but with no real intention of it amounting to anything. We just thought it would be a good memento.

"We put the EP out in December 2008 and teed up a Facebook page and it pretty much went viral. I guess it shows the power of social media."

Working within a framework of reggae, roots and drum and bass, Six60's seven-song EP highlighted both slick playing skills and an ear for clean production that still managed to convey the live intensity for which the band has been turning a few heads.

Buoyed by slinky, bluesy guitar lines, funky stabs of keyboards and a solid rhythm section, Walter's voice sat out front on a range of songs that often ebbed and flowed. Though it is clear that collection of tracks was well crafted, Walters warns it isn't truly representative of the band.

"We are all from different areas and are into different things," Walters says. "We don't really want to constrict ourselves by genre and I know people like to know what we are, but we find that really difficult. Our live performances are a lot different to what the EP is. They are a lot bigger and busier."

A key stage in the band's life-cycle came in early 2009, Walters says. On the back of the release of its debut, self-titled EP, while playing at the Peak Festival in Queenstown, the group members ("we were pretty green at that stage ..." ) studied the other bands, took mental notes and arrived at a collective decision.

"From there, we knew we wanted to make music a career, so we just gigged as much as we could to keep the ball rolling."

Walters says the Six60 members, of who two (drummer Paewai and bassist Mac) still live in Dunedin, harbour aims to take their music further afield. Having headed to Australia for a short tour late last year, they are keen to return; Europe is also in their sights.

Underlining their ambitions, the group has enlisted the services of a professional manager, Teresa Patterson. Along the way, it has also gained support from Campbell Smith, chief executive of the Recording Industry Association of New Zealand (RIANZ), a key promoter of the Big Day Out and founder of CRS Management, whose clients include Bic Runga.

"We had a friend as manager. He was doing a great job but we came to the point where we needed to take the next step. We are always trying to push ourselves," Walters says.

Such connections have helped pave the way for a distribution deal with major label Universal, with the band retaining rights to it music via its own imprint, Massive Entertainment.

So far, the result of that arrangement has been the release of single Rise Up 2.0, for which the band received a NZ On Air "new artist" grant. This week, the track was sitting at No 6 on the New Zealand charts, up 12 places on the previous week, having been in the top 40 for eight weeks.

"We want to complete and release an album, as well as get a couple more singles out there, to continue to grow, really," Walters says.

In the meantime, there's the small issue of the big gig to worry about.