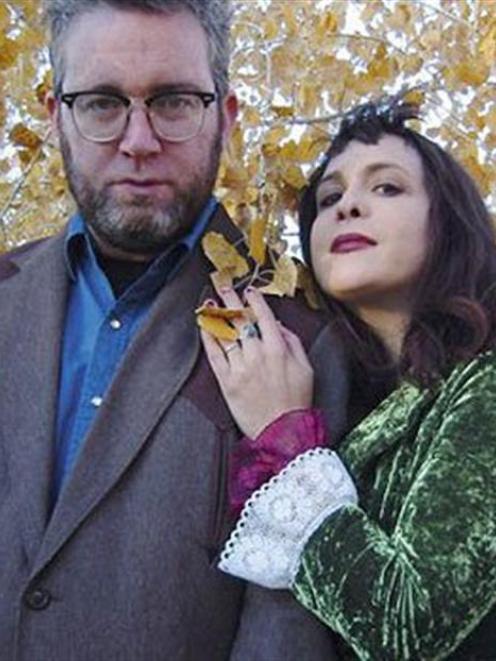 It's a band that is on the radar of many music journalists, even attracting praise from The Times, of London: "This is music that moves forward by turning the clock back - haunting, primal and strangely heroic".

One half of the husband-and-wife duo, lyric writer Rennie Sparks, and I recently shared a convivial chat over the phone.

Many musicians visiting from overseas, particularly those from America, have heard something about some of the bands that Dunedin produced in the 1980s.

However, this isn't the case for the Handsome Family.

"I've heard nothing about Dunedin, but I assume there's not a race of super-intelligent reptiles running the place."

The visit to New Zealand is not the band's first.

"We've been to the North Island before, but this time I think we'll finally get to see a bit of the country. What we saw two years ago was beautiful."

The Handsome Family released its most recent album, Honeymoon, a year ago.

"Where our record came out a year ago, we're now getting to see the far-flung places of the world," Sparks says.

"As a band we've managed to keep going, as we have some very loyal fans that keep us in business. We feel pretty fortunate.

"We never forget [that] someone is paying money for our music - it's very meaningful. We really do have a nice bunch of people who like our music."

Sparks says the internet helps the band keep in touch with friends and fans.

"We get a lot of email messages. If I had a million fans we couldn't do that, but it's good having a thousand or so; you can have that personal touch."

The duo has played with as many as five people in the band, but just the two of them are coming this time around.

"People can expect to get to know us a little better," she says. "I think people are surprised - our music's serious, but we don't take ourselves too seriously. Brett and I will be playing stripped down versions of the songs."

See them
Catch The Handsome Family at Chicks Hotel, Port Chalmers, on January 29.