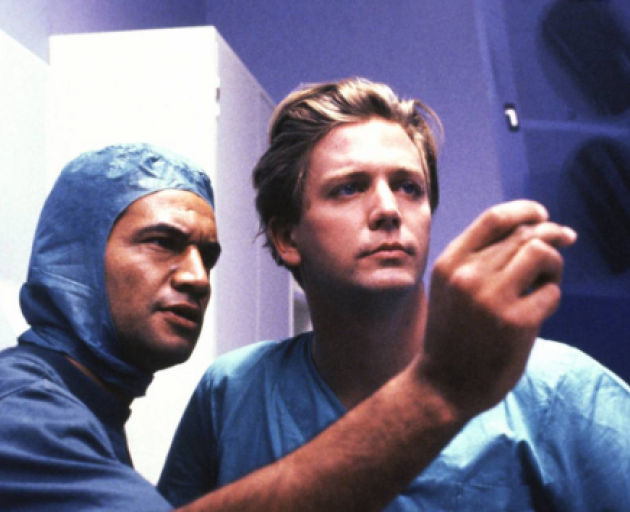 Dr Hone Ropata and Dr Chris Warner. Photos: Supplied
The words too risque for prime-time TV, same-sex kisses that drew the ire of fans and a storyline so secret, even the actor himself didn't know he was the murderer until the end. To celebrate Shortland Street turning 30 on May 25, TVNZ has shared 30 things you didn't know about the show.

1. The word placenta was considered too risque for a 7pm time slot when the very first episode screened in 1992 - a tricky word to avoid given the storyline revolved around a woman giving birth.

2. The iconic 1992 line, "You're not in Guatemala now, Dr Ropata," [levelled at Dr Hone Ropata, played by Temuera Morrison, by head nurse Carrie Burton, played by Lisa Crittenden] was originally cut from the first script because it was deemed "too silly". It was put back in at the last minute.

3. Before the show was launched, the working title was The Shortland Street Project as it was to be shot in studio space TVNZ owned on Shortland Street in central Auckland. However, the production crew realised it was too small and they moved to a warehouse in Browns Bay. After running through several options for the name of the show, including A&E, network execs finally agreed that the original idea was the one to go for.

4. A scene in which Chris Warner [Michael Galvin] exclaimed to his son Harry, "Please tell me that is not your penis?" went viral across the world. US comedian Jimmy Kimmel even did a parody on his show, using Alec Baldwin to act out the line. 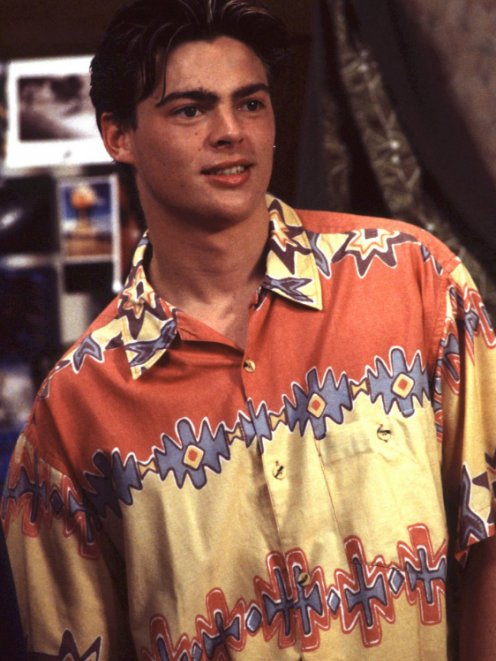 Karl Urban played Jamie Forrest. Photo: Supplied
5. Hollywood star Karl Urban played the first openly gay character and had the first gay kiss, back in 1993, as ambulance officer Jamie Forrest. But male homosexuality on screen took a significant amount more time to be accepted and his early kisses were implied and not seen. Shortland Street's first same-sex kiss was seen on screen a year later, between Dr Meredith Fleming (Stephanie Wilkin) and nurse Annie Flynn (Rebecca Hobbs), and generated several complaints to the Broadcasting Standards Authority - none of which were upheld.

7. Ever wondered what the stars are actually drinking in those glasses of "alcohol"? Sparkling wine is L&P (with a smattering of sugar crystals to make it go extra fizzy), white wine is flat L&P or apple juice, red wine is cranberry juice and beer is the 1 per cent variety.

8. The makeup team uses a fake blood recipe that includes golden syrup. Weet-Bix and cornflakes are used to create masterful scabs, rice bubbles double as warts or cold sores, honey is convincing as pus, and babies are covered in strawberry jam for shooting birth scenes. And a department favourite for vomit is blended canned tropical fruit salad or chicken soup.

9. One of the least-watched episodes was one done entirely in song that screened on the day of the September 11 attacks in 2001.

10. The serial killer cliffhanger of 2007, which came after psychotic nurse Joey Henderson's (Johnny Barker) rampage through Ferndale, was such a top-secret storyline that not even the actors who played suspects knew whether they were the killer or not. Even Barker was blissfully unaware until just before the cliffhanger scripts were released to the actors. Security around the episode was so tight that four different endings were shot to create confusion. 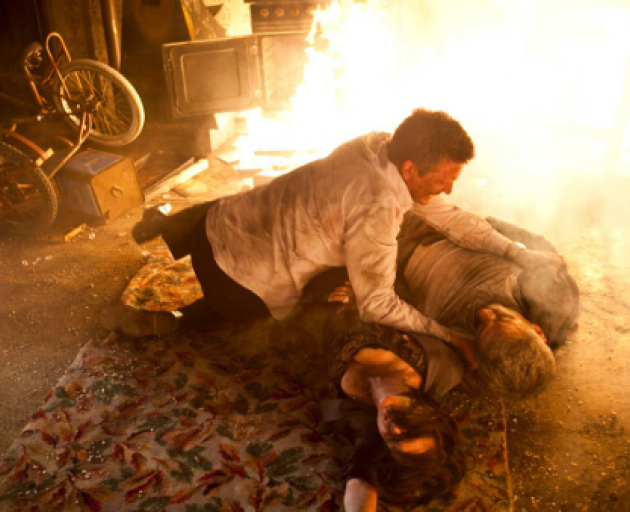 Dr Callum McKay, Chris Warner and Rachel McKenna. Photo: Supplied
11. In the 2010 cliffhanger, which saw Dr Callum McKay (Peter Mochrie) throw himself on top of Dr Warner and hospital chief executive Rachel McKenna (Angela Bloomfield) to protect them from a fiery explosion, the crew accidentally destroyed a studio necessitating a new build for 2011. The scenes were shot using real fire effects which charred the walls and floors of the studio. All of the crew had to wear masks when filming that day as the smoke was so intense. And to fully enhance the dramatic effect of those final moments, the sound engineer added roaring lions into the mix among the fire noise.

13. There have been 68 deaths and 36 babies born (of core and major guest cast characters), including two sets of triplets and one set of twins.

14. If you were to watch every single episode back to back without a break, it would take you about 124 days.

15. In 2009, for the first time in the show's history, scenes had to be reshot due to international circumstances. A character happened to be returning from Samoa in the week after the country's devastating Tsunami. In the original story, the character discussed enjoying the sunshine and having drinks at the beach. A decision was made to reshoot the scenes to acknowledge what had happened in real life.

16. The highest-rating episode of all time occurred on May 31, 1995, with more than 700,000 Kiwis tuning in. In the lead-up, nurse Tiffany Marinovich (Alison James) tested positive for Hepatitis C, information nurse Carla Summerfield (Elisabeth Easther) used to blackmail her and force her to resign. Carla had also been appointed acting head of nursing after her sister Ellen (Robyn Malcolm) was stood down for a positive drug test (Carla had secretly sprinkled weed on her pizza). In the hit episode, clinic boss Julia Thornton (Elizabeth Hawthorne) finally realised Ellen had been set up and ended her suspension.

17. In 2019, more than 10,000 people queued, some for up to eight hours, to tour the sets and meet some of the show's actors. Some uber-fans even flew from Australia for the day.

18. Galvin holds the record for the longest-serving cast member, having starred on the show for a total of 26 years. He was part of the original cast, left in 1996, returned in 2000 and has remained ever since. "Dr Love", as he is affectionately known by fans, is a cosmetic surgeon by trade, and the wealthy current chief executive of the hospital. Viewers were introduced to his charms in 1992 when he was having an affair with his aerobics instructor (Suzy Aiken). Since then, he's been married five times, fathered six children, has two grandchildren, battled a morphine addiction, been arrested for indecent assault, been framed for murder, gone to prison, survived a grisly car crash, plane crash and several other near-death experiences.

19. Five episodes are produced in five 10-hour working days. The pace of shooting is fast - an average of one minute of screen time every 20 minutes. To compare, most films shoot an on-screen minute every 3.5 hours.

21. Over the years, real-life events have coincided in uncanny ways with plots, despite storylines decided over four months beforehand.

Memorable examples include the nurse's strike of 1992, students marrying for bigger loans, neo-Nazis lurking in the suburbs and Maia and Jay's civil union (complete with Serenity Church protesters).

In a 2003 episode, the hospital's backup generators failed during a power cut. There was debate about how likely it would be at a major hospital, but within a fortnight, Starship had a power cut and their backup generator failed. Also, South Pacific Pictures' studios came to a standstill the Friday before the episode went to air, due to an area-wide power cut.

There was also the time a small earthquake occurred in Hawke's Bay the same night as a Shortland Street quake. There was even a virus storyline at the time NZ went into its first Covid-related lockdown in 2020. Eerily, the scenes had one cast member on a respirator and everyone wearing full PPE. That virus turned out to be caused by the water supply being poisoned with anthrax. 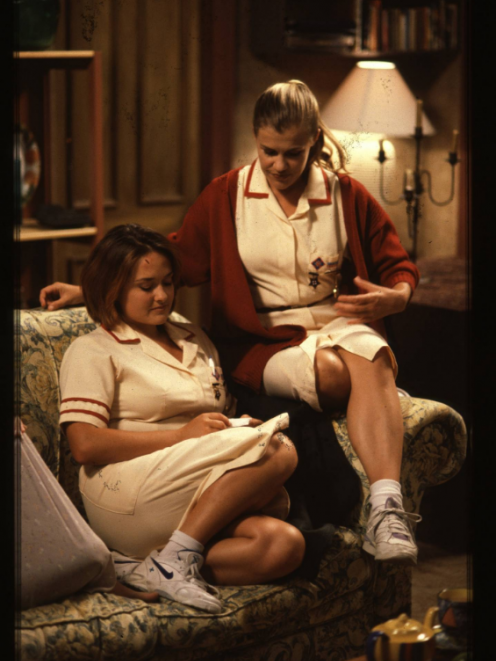 Nurse Carla and Ellen. Photo: Supplied
22. The only time Shortland Street has ever not gone to air when it should have was during the country's first pandemic lockdown in 2020. Filming had to stop so episodes were cut back to three nights a week, to ensure they did not run out.

23. Shortland Street was one of the first productions in the world to resume filming in 2020 while the world was still in lockdown. Several other well-known international shows sought advice about how they were able to restart filming while adhering to Covid protocols. Using a pane of glass between actors for kissing scenes and acting out intimate scenes with a dummy were two of the initiatives adopted by Shorty in order to protect their cast and crew.

25. The first words spoken on the show were "Shortland Street accident and emergency centre". The now-famous "Kia ora, welcome to Shortland Street" was implemented during a storyline in October 1995.

26. Shortland Street celebrated Te Wiki o te Reo Māori 2021 by fully integrating te reo into the week's episodes. A complete story was told predominantly in te reo and, for the first time, the programme was subtitled in te reo Māori.

27. The show is hugely popular in Fiji where it plays in a prime-time slot and much of the island shuts down in order to watch it. The show has also been to Fiji several times to film, twice with Galvin, who is a superstar over there. The most recent trip was in 2014 and had several doctors and nurses volunteering for the Fred Hollows eye clinic and one doctor having to assist in the delivery of a baby on the side of a deserted road. The show has also filmed episodes in Rarotonga.

28. Among the cast and crew are many stalwarts of the television industry, one in particular, Michele Priest, has worked on the show every year since it began, in a variety of roles. She has been head of department since 1999.

29. There have been a significant number of actors who have crossed over to the production side, including Angela Bloomfield (Rachel McKenna), who has been a director, Karl Burnett (Nick Harrison), who became a boom operator, and Harry McNaughton (receptionist Gerald Tippett) spent several years on the story-lining team and still occasionally writes for the show.

Matt Dwyer (Darren Bailey), whose character came to a nasty end, is the show's casting director.

30. In 2011, Amanda Billing's (Sarah Potts) version of the Buzzcocks' Ever Fallen in Love was recorded for a TVNZ winter season promotion, but wound up being released and went to 24 on the singles chart.