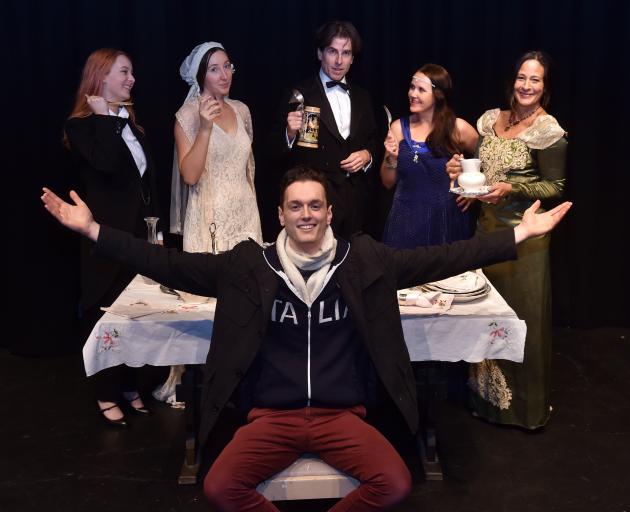 Thomas Makinson with some of the cast of his one act play (from left) AJ Keable, Erica Julian, Kipp Savoie, Mel McCosh and Kim Cope Tait, rehearsing at the Globe Theatre. PHOTOS: PETER MCINTOSH
Two young Dunedin directors will present one-act plays at the Globe this month. Rebecca Fox talks to Thomas Makinson and Aaron Richardson.

The passionate film-maker had to reassess his life and consider new ways to be creative.

"I didn’t want to let go of the creative side, so I took the chance to re-educate in theatre with the idea of becoming a drama teacher."

He has always loved drama, having been involved in amateur theatre in Mosgiel since he was 13 years old and at high school, working behind the scenes doing technical work and stage managing.

"I was still passionate about it and I was thinking what could I do without much technology." 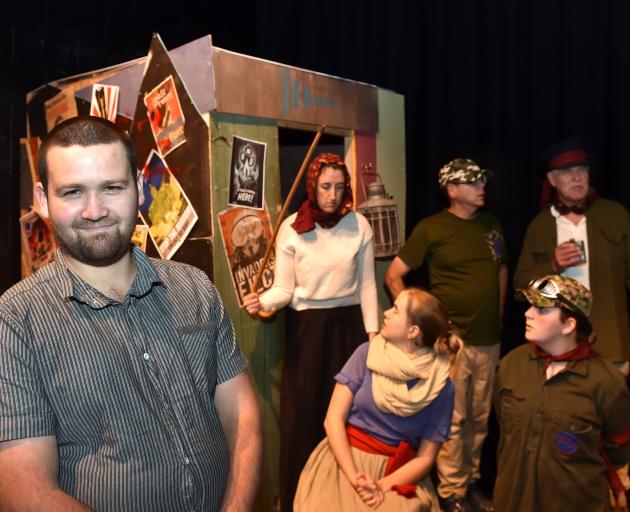 Aaron Richardson (left) is directing his first theatre cast (clockwise from rear) Callie Weitzel, Esther Smith, Peter Davidson, Ray Spense and Elizabeth Audas, in rehearsal at the Globe Theatre.
While he loved it, his ultimate goal was always film. So he went on to do a degree in film.

"But then my health deteriorated four years ago where I was losing sight."

Richardson, who has diabetic retinopathy, reckons he has always had director’s blood in his veins, as he always liked to control his vision to make it work.

So taking on theatre directing fitted just as well.

Last year, he was about to put on A Kind of Justice by Margaret Wood, when Covid-19 hit two weeks into rehearsal, forcing its cancellation.

"I felt kind of let down as I had this crew and cast and couldn’t do it."

So when the Globe asked for play proposals this year, he decided to put his work forward and it was accepted.

Two of his original cast, Ray Spense and Peter Davidson, are back, along with three "newbies".

"It’s nice they have the opportunity to play the character they prepared for."

Richardson was attracted to the play as it was so open to interpretation. The script reads quite blandly, he says.

"You could set it anywhere, at any time. So I’ve been out to put my own spin on to it."

It also fitted Richardson’s love of politics and the drama involved in politics.

"Unlike Thomas’ play, mine is very serious. So I put a world around this play of conjecture, that if we carry on the way we are in today’s society ... It’s quite tense, no funny moments.

"There is quite a lot of emotional acting. It’s all about their morals."

"I made a conscious decision one of the characters should be a female rather than male. I liked the dynamic having two opposing sides of the same sex."

He also amended some of the language to be more modern.

Richardson is giving his cast some "head space" to get into the characters, given the weighty script, and develop their characters’ own backstory.

He has found similarities and differences in directing for theatre as opposed to film.

"There is a lot more involved in theatre. In making film I did a rehearsal process but not to the same extreme as this.

"I’ve always been about building character and backstory."

With friends and the cast helping out he was able to overcome the difficulties in reading the script and has been enjoying the experience — making "propaganda" posters and building the set.

Richardson says it will be interesting to see how his play sits alongside the other bill for the night, Thomas Makinson’s A Respectable Wedding by Bertholt Brecht.

"They’re polar opposites of each other. One’s a 1920s period piece, a comedic farce, while the other is a thinker, a tear-jerker," Makinson says.

"I want it to start people thinking about society and what we can do differently to change," Richardson says.

Makinson says he is looking forward to starting the night off with some laughs.

Having been involved with the Globe for about six years, mostly as an actor, he started taking on directorial projects such as the Toybox children’s theatre in 2018. He also studied directing at the University of Otago.

He pitched A Respectable Wedding to the Globe committee in 2019 and it was scheduled to go on last year, but like Richardson’s play, Covid-19 meant it did not go ahead.

"I thought I’d throw my hat in the ring and see how I got on."

Makinson is a huge Bertholt Brecht fan, doing one of his plays for his honours studies. But he chose this one to direct for the Globe as it is a one-act play, taking less time to rehearse and fits well with other plays.

"I read this play when I was doing the other and thought I want to direct this one, as well."

He has learnt from experience that preparation is key to a successful production and allowing enough time to rehearse.

"My acting has influenced my directing. I try to be the kind of director I’d want to have as an actor, I tend to almost let them figure stuff out for themselves, almost a hands-off style."

With a cast of nine, it has lots of interesting characters as it is similar to the classic British farce, he says. It is all one scene with most of the cast on stage the whole time.

"We think it is hilarious. They are all pretty nasty people as Brecht was making fun of entitled, rich people."

The challenge has been creating the set, which is essentially a high-class dinner party so it requires a lot of props.

"It gets broken in various ways during the play."