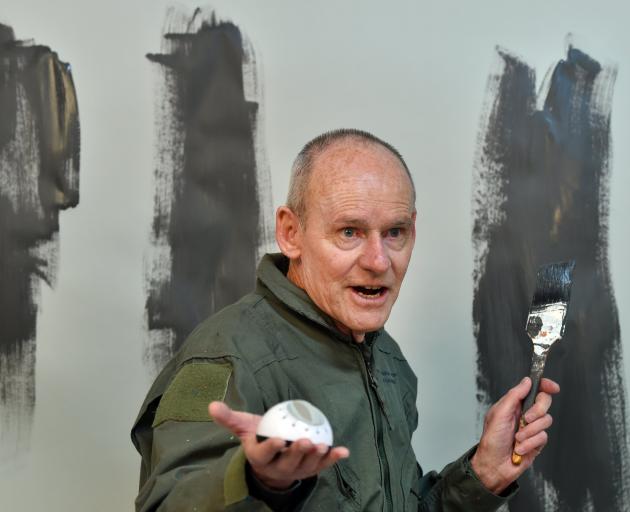 Simon O'Connor stars in Watching Paint Dry. Photo: Peter McIntosh
My watch says it's 7.13pm. Ten or so minutes ago, when the show began, the overalled performer (who is he: a Zen master, an amateur philosopher, a tradesman with psychotherapeutic ambitions?) informed us that today's colour is Adrenaline Orange.

Then, tentatively at first, he painted a large white rectangle in that very shade. He's also asked the audience to leave their phones on, with the volume turned up.

Now he's sitting on a chair with his back to us, inspecting his handiwork and occasionally giving the audience an embarrassed glance.

Someone's phone makes a sound, but its owner decides not to answer it. A fly buzzes. A reviewer not-quite-soundlessly turns a notebook page.

At 7.20 the performer touches the paint - still tacky.

There are a few nervous titters. Everyone, seemingly, is waiting for something to happen, but what? How are we going to get through the rest of the show?

Well, we do get through it, and by 8pm we have, obediently perhaps, pondered the preciousness and fragility of life, contemplated the passage of time and wondered if we can think about the paint and the wall as separate entities.

We have not been bored. We have also watched paint dry.

Written, produced and directed by Anders Falstie-Jensen, Watching Paint Dry is brought to Dunedin by The Rebel Alliance.

The performer is played, with his usual sensitivity, intelligence, superb timing and fine sense of the ridiculous, by local actor Simon O'Connor.

Lighting by Sean Lynch is an integral part of the play, and vital for both mood and meaning.

About 50 people attended last night's performance, and probably reacted with about 50 kinds of mystification.

The applause at the end indicated genuine appreciation of this intriguing, disconcerting theatre experience.