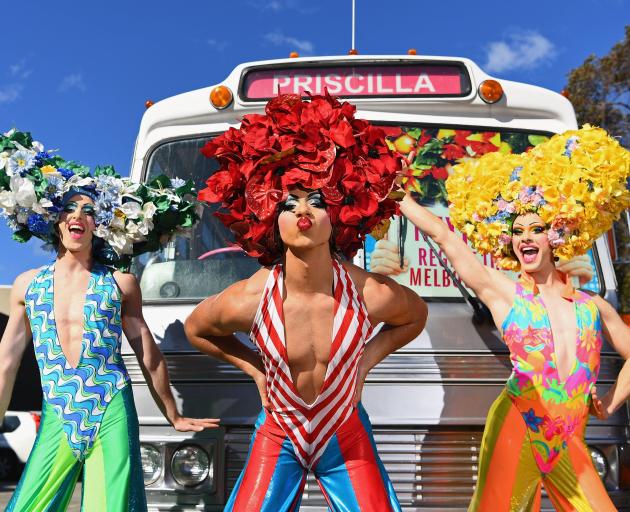 The tale of two drag queens and a transsexual, who take a road trip to the Australian Outback to perform a lip-sync cabaret show, became an international, cult hit. Photo: Getty Images
The Australian musical Priscilla, Queen of the Desert opened for a season last night in a packed Regent Theatre. Dunedin Music Theatre's producer Doug Kamo and team (production manager Heidi Haywood) have put together an outstanding production - a stupendous, dazzlingly colourful, and very gay performance.

The storyline is loaded with silliness and fast rhetoric, but there is a "love and live happily ever after" aspect. Outright success comes from the spectacular, over-the-top flamboyancy of drag queens Mitzi Mitosis, nicknamed Tick (Greg MacLeod), Falicia (Jacob Irby) and a recently bereaved transgender woman Bernadette (Cameron Douglas) who travel to Alice Springs in "Priscilla", a pink bus.

Hilariously awkward situations and encounters in the great Aussie outback totally captivate, as the trio dance and gyrate in their platform heels, sequins and feathers, before reaching their destination, a cabaret show in Alice Springs. Full marks to choreographer Emma Hollaway for the pace and energy in the men's ensemble dancing sequences, and to musical director Stuart Walker who led the 10-piece band and off-stage backing group through the faced-paced score.

Brilliant costuming, outrageous hair designs and make up, luscious eye-lashes, and not a chest hair or leg stubble to be seen are a talking point in themselves. (Lynnette Ballentine and Crystal Allpress). Various cameo appearances added to the mayhem and humour, and a little boy named Benji (Joseph Kelly) brought a few emotional moments of total silence.

The audience sang along to many well-known hits such as I Will Survive and a number were invited on stage to join in Thank God I'm A Country Boy.