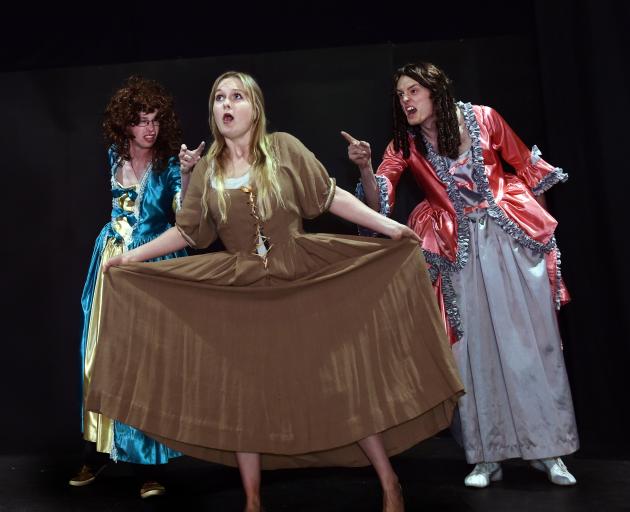 Starring in the Globe pantomime Cinders are (from left) Edward Matthews, Jen Hughson and Thomas Makinson. Photo: Peter McIntosh
Childhood memories of going to see a pantomime at Christmas has inspired Dunedin’s Globe to tackle the genre for the first time. Rebecca Fox talks to director Lynne Keene and actress Jen Hughson.

Lynne Keene's fascination with Christmas pantomimes - the fairytales, humour, the role reversal, and melodrama - has stayed with her.

''As an ex-Pom myself, as a kid that is how I was introduced to the theatre. Going to pantomimes at Christmas in the United Kingdom when it's cold and everyone needs a cheer-up.

''I'm fascinated by them, always have been.'' 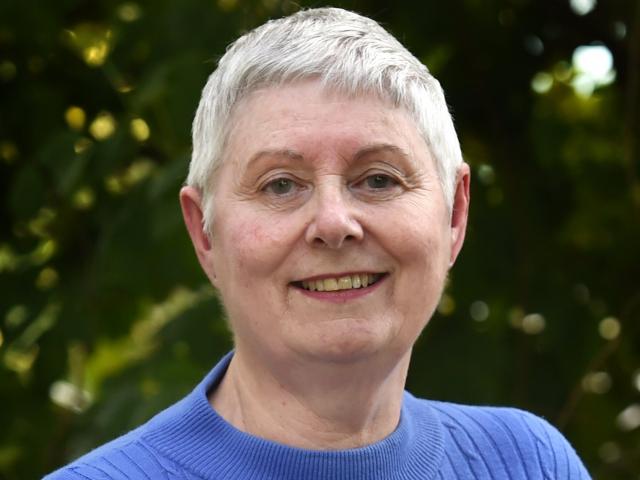 Lynne Keene
So this year she suggested to the Globe that they do one and after looking at some options came up with Cinders, by David Tristram, based of course on the fairytale of Cinderella.

''As far as I'm aware the Globe hasn't attempted one before.''

Keene was ''immediately taken'' by Tristram's version of the Cinderella story, which he wrote to help his local Shropshire drama club, which needed to raise funds for a leaky roof.

''You'll be aware the Globe replaced its roof recently.''

It was also a production which needed to be done as economically as possible - another trait required by the Globe.

The script really appealed to its star, ''Cinders'', played by Jen Hughson.

''When I read it for the first time I was cackling away to myself. I couldn't keep a straight face and when I got to the hairy godmother I lost it.''

Cinders has the required role reversal in it, the ''ugly sisters'' played by men and the prince by a woman. The narrator, the ''hairy godmother'', is also a bloke.

While some people question the role reversal these days, says Keene, she believes it is important to follow the tradition.

''Away back in Tudor times they had the Feast of the Fools and in the Roman Times there was the Festival of Servants.''

With the role reversal went plenty of innuendo, which should go over the heads of young children but be appreciated by the adults in the audience.

For Hughson, the role of Cinders is a chance to get back on stage as an actor and strengthen her skills in that area.

Her character is ''fairly traditional'' but with a little ''cheeky'' in it. She is a dreamer, a romantic and as soon as she hears the prince is in town ''wants a piece of him''.

Hughson comes from a musical theatre and dance background - she played Frenchie in Grease last year.

''I'm really keen to try acting and this role has a bit of everything and I get to be involved in a different theatre community and the scale is different, it's a lot more intimate.''

She is also pleased it is a production her 4-year-old could come to as well as her grandparents.

''They'll enjoy it for totally different reasons. It's such a good mix.''

Keene says they will be encouraging the important audience participation aspect of pantomimes.

''The cast will be encouraging that - the boos, hisses, cheers and the sympathy.''

Some of the jokes and references were very British so Keene has spoken to the author to get clearance to ''Kiwify'' it where needed.

''Some of the cultural references just didn't work in New Zealand. I had to explain some of the jokes so thought maybe it needed to be broken down to be more Kiwi.''

Hughson says the cast is having heaps of fun bringing the story to life.

''We're working well as a team and Lynne is good at listening to our ideas and then giving us good direction. We've all felt included in the process.'''

The costumes are being created by Sofie Welvaert who was pulling out some costumes from the past to recycle.

Hughson, who is a keen sewer and when not on stage is often found making costumes backstage, has offered to create her ballgown for the pantomime.

Keene has also picked up a special prop for the show - a supermarket trolley - but she is keen not to give away too many surprises.