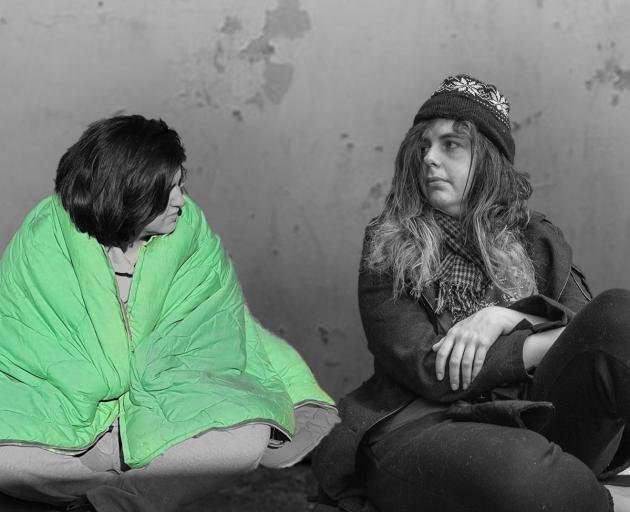 Lauren Huggard (left) and Dia Taylor play women who have experienced homelessness. Photo: Supplied
A play streaming into the Dunedin Fringe Festival tells a story of homelessness in the words of those shut out, writes Tom McKinlay.

That’s her observation. Covid has had an impact, making the problem more difficult to quantify from street level, but in the past few years the number of people living rough has been quite noticeable, she says.

Despite that, the effort to find solutions to the problem seems to wax and wane.

"There are certain leaders who might present a solution for it, then something else happens in the world and it gets put in the back box."

Various manifestations of homelessness are centre stage in the play Crash With Me, co-written by Huggard and her Sneakyville Theatre troupe, which will stream during this month’s Dunedin Fringe Festival.

"It is a big topic and we want it to be heard about," she says of her Melbourne-based theatre company’s decision to zero in.

"It was something we didn’t have much knowledge about ourselves, in some ways. We kind of just drew it out of a hat in the end, as we had three other different themes we could have gone down in terms of making a new show, but homelessness seemed to be the most important one."

Among the issues Huggard’s company wanted to investigate was reports that homeless women looking for accommodation were being asked for sex in return for somewhere to sleep.

Crash With Me traverses the impact of dating apps on the ability of homeless people, women in particular, to find shelter.

As with Sneakyville’s previous productions, the play is verbatim theatre, written using material from interviews with people who have experienced homelessness.

"Every show we have done we have interviewed people on that particular topic and then used the real words from the interview to create our script."

The intention is to show the essence of the people behind the words collected.

Huggard says the people they talked to had indeed encountered situations in which the bargain was sex for shelter, but the interviews also threw up a great many other things.

Among the anecdotes to emerge involved a woman who had been living on the street, then moved into a house but because she had not been in the habit of showering, she didn’t.

"It wasn’t until someone told her that she stank that she realised that she needed to shower. That was one of the moments that really stuck with me. Personal hygiene, I guess, when you are in that situation of being homeless is not a big priority."

It was another example of the value of the verbatim approach, Huggard says.

"I find it really eye-opening and really valuable — you get a real insight into different people’s lives ... I think that’s why I am so passionate about verbatim theatre.

To illustrate the point, Huggard reaches back to a verbatim exercise she was involved in at university.

The show being developed was called Perfection, so they were talking to people about what that meant for them. One of the interview subjects was a plastic surgeon who began to talk about the late theoretical physicist Prof Stephen Hawking in a distinctly questionable way.

"You wouldn’t get away with writing that yourself but because it was verbatim, you could."

The first verbatim show Sneakyville put together should perhaps have had a wider audience, as a warning.

That was back in 2018 and it was called Q. The topic: conspiracy theories.

"The people we interviewed were QAnon members or followers. At the time QAnon was barely heard of and now it is everywhere."

There was no particular intention to focus on the monster phenomenon at the time, rather to interrogate the nature of conspiracy and it just so happened that the people in their community engaged with conspiracy were QAnon adherents.

"We spent the three-hour meeting with them hearing all kinds of things."

The online presentation of Crash With Me that features in the festival fits with the lived experience of putting it together and rehearsing, which was largely on Zoom during last year’s Melbourne lockdowns.

"Only on the night when we first performed it — did a livestream — were we all together for the first time."

Crash With Me will stream as part of the Dunedin Fringe from March 18-28. The link is available from the fringe website.