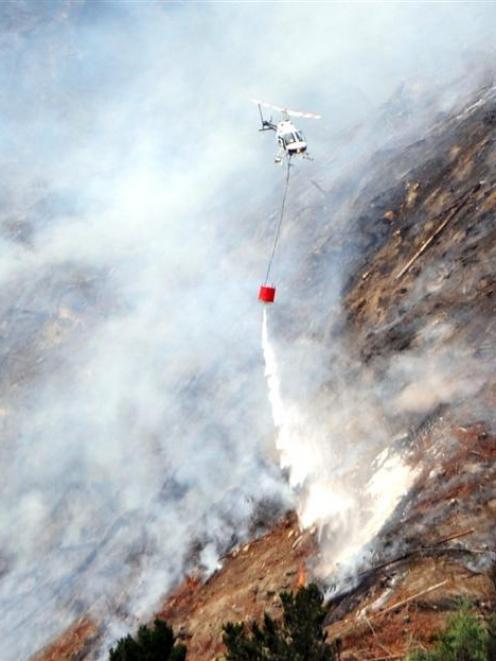 Helicopters fight a forest fire at Mt Allan last December. Photo by Peter McIntosh.
The cost of four rural fires in Dunedin late last year, including a major blaze at Mt Allan, has blown out the city's civil defence and rural fires budget by almost $1 million. However, manager Neil Brown said the cost would be recovered.

The cost of the Mt Allan fire alone was more than $900,000, and the results of an investigation into its cause was expected in the next two weeks, he said.

The issue has come to light in the Dunedin City Council's financial result to the seven months to January 31, 2011, which showed civil defence and rural fires "unfavourable" by $899,000, with fire-fighting costs "well over budget".

Mr Brown said the fire at Mt Allan, and three earlier fires at Henley, near Old Brighton Rd and at Harington Point, caused the budget result. The council paid the bills for the fire, then went into recovery mode.

"What we have is a policy of attempting to get 100% of costs recovered," Mr Brown said.

Costs could come from the person responsible. Alternatively, where cause could not be shown or those responsible could not be ascertained, there was a government national rural fire-fighting fund that could be accessed.

It was within the perimeter of a February-March fire which consumed 710ha and took two weeks to contain. The major cost of the fire was helicopter time, and the cost of foam that was mixed with water.