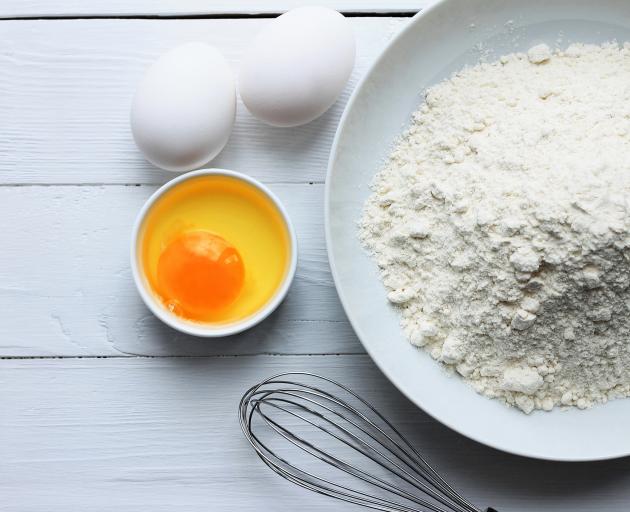 The kitchen roof has been letting in water for some time now, and repairs need to begin before winter sets in. I particularly appreciate the long, thin room — more of a galley, really — when the rain beats down on the skylights or a layer of snow sits on the glass, muffling both sound and light. It is then, with a cake in the oven or a deep pan of thickening polenta on the stove, that the kitchen is at its most cosy.

It takes surprisingly little activity to turn a cold, leaky kitchen into a warm and welcoming space. You make a bowl of batter with flour, egg and milk, ladle little pools on to a hot pan, and in 5 minutes you have a batch of warm drop scones. It’s the sort of baking no-one does any more but probably should. Traditionally they are spread with deep waves of clotted cream and rivulets of runny jam, but I prefer to add a handful of berries, so their juice stains the doughy cakes with streaks of purple.

Making drop scones the other day, it occurred to me that I could tweak the recipe towards something savoury by ditching the sugar and introducing a punchy cheese. We ate the result, as homely as cheese on toast alongside a frying pan full of pumpkin hash with onion and rosemary. Suddenly the damp patches on the ceiling seemed a little less urgent. Injured it may be, but the kitchen is still doing what it does best.

I use smoked bacon here, but pancetta will be fine, too, as would finer, air-dried prosciutto or even salami, finely chopped.

Fry the bacon in a shallow pan until crisp, then drain on kitchen paper. Alternatively grill the bacon in a griddle pan or overhead grill until crisp. Leave to cool. Finely chop the parsley. When the bacon is cool, chop into small pieces, about the size of fine gravel.

Put the flour in a large mixing bowl, add the baking powder and combine. (You can sieve the two together if you wish.) Break the egg into a bowl and beat lightly with a fork to combine whites and yolks, and mix in the milk, then fold into the flour.

Add the grated parmesan to the batter, then stir in the bacon and the parsley.

Melt the butter in a small saucepan then remove from the heat. In a small, non-stick or well-used frying pan, pour a couple of tablespoons of the melted butter and let it warm over a moderate heat. Pour in a sixth of the bacon and parmesan batter, making a round approximately the size of a digestive biscuit. Repeat with 2 more then let them cook for 4-5 minutes, checking the undersides regularly for colour. When golden, use a palette knife to carefully turn each one over. Leave for a further 3-4 minutes then lift out and keep warm. A sound test for doneness is to touch the centre of each scone with your finger. It should feel lightly springy. Repeat with the remaining mixture. Serve the scones warm, with the pumpkin below.

The endlessly useful and easily transported butternut can be used here if carrying an entire pumpkin home doesn’t appeal.

Peel the pumpkin and cut the flesh into cubes roughly 3cm x 3cm. Peel and roughly chop the onions.

Warm the butter and olive oil in a shallow pan, add the pumpkin and onions and let them cook, with a regular stir, for about 10 minutes. Chop the rosemary, add to the pan with a little salt and black pepper, then cover with a lid and leave to cook over a low to moderate heat for about 15 minutes.

Check the mixture occasionally to make sure it isn’t browning too much. It is done when the pumpkin is soft and easy to crush between your fingers. Serve with the bacon drop scones.

Most berries lend themselves to inclusion in a drop scone. Elderberries and blackcurrants can be used from the freezer.

Mix the flour, baking powder and sugar in a large mixing bowl. Break the egg into a small bowl, beat to combine and mix in the milk. Fold the milk mixture into the flour and sugar and set aside.

Melt the butter in a small saucepan and set aside. Stir the currants or berries into the batter. In a small, non-stick frying pan, pour a couple of tablespoons of the melted butter and let it warm over a low to moderate heat. Pour in a sixth of the batter, letting it form a round about the size of a digestive biscuit. Repeat with 2 more then leave for 4-5 minutes, checking the undersides as you go. It should never be more than pale gold. When done, turn the scones using a palette knife. Leave for a further 3-4 minutes then remove from the pan, check they are lightly springy to the touch, and keep warm. Repeat with the remaining mixture. Serve the scones warm, with cream, creme fraiche or sour cream.