As it gets chilly outside, get chilli (+ recipes) 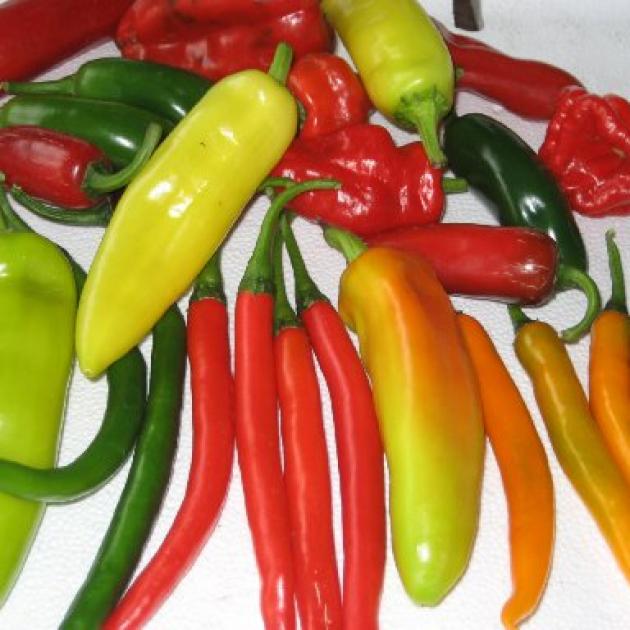 chillies.jpg
Chillies are native to Central and South America, and widely used in Mexican cuisine, where they were cultivated some 5000 years ago.

The explorer Christopher Columbus, who was looking for pepper, was the first European to come across chillies, and he and the Spanish and Portuguese took them back to Europe and on to India, Southeast Asia, Africa, China and Korea, where they have become an integral part of those cuisines.

About 300 varieties of chilli are grown in Mexico. They are a relative of capsicums or sweet bell peppers, and like them start green but ripen to red, orange, yellow, purple or brown, depending on variety.

Their famous heat is due to the pungent chemical capsaicin, which protects the seed of the chilli fruit. Birds are immune to the heat and scatter the seeds widely, but mammals, including humans, are pained by it.

However, in pain can be pleasure, which is no doubt why chillies have spread so widely around the globe in the past 500 years.

Chillies range from mild to searingly hot, and several scales have been devised to measure the intensity of heat, from the scientific Scoville scale to a more user-friendly 0 to 10.

A general rule of thumb is that the smaller the chilli, the hotter, but that doesn't always apply as some large ones can be particularly fiery.

There's no really reliable way to gauge the heat of a particular chilli without cutting it and putting it gently on your tongue - some have a fiery burst at the front, but watch for those that creep up on you.

A great deal of the heat of a chilli is in the seeds and the white membrane that holds them to the walls, so it is usually recommended that this is scraped out before the flesh is used, although in India and other places where chillies are an integral part of the cuisine, seeds and all are used.

The capsaicin gets on to hands, knives and chopping boards, so cooks are warned not to touch sensitive parts of the body such as eyes after cutting chillies - or to wear rubber gloves.

It does not wash off easily, although hot water and soap will help, but it does fade after some time.

You can reduce contact by slicing the chilli longways, holding it by the stem or outside skin, and using a sharp teaspoon or small knife to scrape out the seeds and membrane carefully.

However, heat is not the only characteristic of chillies: they can also have fruity, floral, smoky, nutty, tobacco or licorice flavours, depending on variety and whether they are fresh, roasted or dried.

Besides fresh chillies, dried, flaked and powdered chillies are available, as are numerous hot chilli sauces.

These vary in accordance with the cuisine they come from - Mexican chilli powder usually has cumin, oregano, paprika and garlic in it; the Spanish smoke their chillies before drying to produce sweet or hot paprika; Mexico and the southwestern US states smoke jalapenos to produce chipoltes; some Thai chilli sauces can be sweet, which suits some dishes but not others.

A good New Zealand hot chilli sauce is made in Northland by Kaitaia Fire, and Tabasco, a fermented chilli sauce from the Mexican state of the same name, has become an international standard.

Given the more than 300 varieties of chilli in Mexico and numerous cultivars, it can be difficult to identify fresh chillies.

Names of chilli types vary, as does the spelling (chilli, chili, chile).

They may even be given different names when fresh and dried, such as the poblano chilli which is called ancho when dried. Many Mexicans and others who appreciate the subtle differences of flavour will mix several types in one dish.

A little fresh or dried chilli can be added to many dishes to spice them up. Chillies go well with tomatoes, fish, chicken, beef, lime juice, ginger, garlic, cumin, coriander and sugar.

- Chilli oil is a handy flavouring that can be found readily in supermarkets, but you can make your own easily. Deseed and finely chop two small, hot chillies and put in a saucepan with 300m of canola oil. Heat gently for 5-6 minutes until the chilli is soft. Cool and strain the oil into a clean bottle.

- Chilli lime sauce has become a modern staple to use as a dipping sauce, a marinade or for serving with fish. To make your own, put the following in a processor and blitz: a coriander plant, roots and all, 2 cloves garlic or more, 1 Tbsp caster sugar, 4 small green chillies or more, 3 Tbsp fresh lime juice, 2 Tbsp fish sauce, a pinch of salt.

- Salsa is the Spanish word for sauce, and salsas are usually made of finely chopped, fresh ingredients served with hot or cold meat, fish or vegetable dishes.

To make a colourful, refreshing salsa, finely chop 1 fresh, deseeded chilli, 1 grilled and skinned red capsicum, 1 grilled and skinned yellow capsicum, half a red onion, a handful of fresh coriander leaves, and mix with 3 Tbsp olive oil, 3 Tbsp wine vinegar, 2 Tbsp lime juice, and salt to taste. It's best to let the flavours infuse for about an hour before using.

- Chilli con carne is an old staple of many a student flat but in Texas and the US Southwest, it's almost a way of life with chilliheads arguing over the ‘‘real'' recipe.

It originated, according to Marjie Lambert in The Real Chilli Cookbook (1996), as a food of the American frontier, made with dried beef or whatever game could be caught, along with chillies that disguised any rancidity, and long simmering to soften the tough meat.

Like many of these old recipes, it's variable depending on what you have, but the basics are beef mince, beans, onion, chilli and tomato.

Soften a chopped onion in some oil, then stir in beef mince. When browned, add a tin of tomatoes or some chopped fresh ones, one or two deseeded and chopped chillies or some chilli powder, precooked or tinned kidney or pinto beans, and some cumin, bay leaf and oregano or whatever herbs you have to hand, and, of course, salt and pepper.

Simmer for 10 minutes to half-an-hour or longer. Nice additions are a finely chopped stick of celery, carrot and garlic along with the onion, some tomato paste, beef stock or Worcestershire sauce and maybe a little brown sugar.

Serve with rice, potatoes or, more in keeping with its American origins, polenta or cornbread.

- Stuffed chillies Unless you are feeding chilliheads, it's best to select milder chillies like Hungarian yellow wax or Anaheim for stuffing.

In Mexico, chiles rellenos (stuffed chillies) are usually dipped in batter or cornmeal and deep fried, but they are also good cooked simply under the grill.

Roast and skin the chillies first, then slit in half and remove the seeds. Stuff the halves and cook under the grill until browned.

- Arrabbiata (angry sauce) is a fresh tomato and chilli sauce for pasta from Southern Italy where chillies are an essential part of the cuisine.

Finely chop an onion and a couple of cloves of garlic. Soften in a little olive oil, then add chopped ripe tomatoes and a finely chopped, deseeded chilli. Stir and simmer for about 15 minutes until all is melded.

Season with salt and freshly ground pepper to taste, and add fresh basil or parsley, then serve with pasta. Top with freshly grated Parmesan. A little finely chopped bacon added along with the onion is nice if you do not want a vegetarian sauce.

- Harissa is a searingly hot sauce from North Africa that has many uses. Add a (very) small dollop to soups, stews or casseroles for a burst of excitement (it's particularly good with chickpea soup); dilute with a little fresh tomato sauce and spread sparingly on pita or other flat bread with olive oil or even on pizza; use in bean salads or to baste lamb or chicken before or after barbecuing. A little goes a long way.

There are many versions of harissa, red with red chillies and without herbs, or green with green chillies and mint or fresh coriander. If you use dried chillies, soak them in hot water first.

To make a green version, blitz the following in a processor with some olive oil until it becomes a thick paste: 250g fresh green chillies, deseeded and chopped, 4 peeled garlic cloves, 1 Tbsp ground coriander, 1 Tbsp ground cumin, 1 Tbsp dried mint or 2-3 Tbsp fresh, 3 Tbsp fresh coriander leaves, 1 Tbsp salt or to taste. It will keep in the fridge for months.

- Zhoug is a version of chilli paste originally from Yemen, which is now popular in Israel.

Some use water instead of oil and put a layer of oil on top to preserve the sauce. Made with oil, it keeps in a jar in the fridge for several weeks according to Claudia Roden in her magisterial The Book of Jewish Food (1997). It's good on roasted vegetables, flat bread, on chicken, fish, in stews and salads. Use sparingly unless you are feeding chilliheads.

Diana Henry in her excellent Crazy Water Pickled Lemons (2002) serves it with roasted vegetables and labneh (yoghurt cheese which is easy to make but has to drain overnight).

I used feta instead because I hadn't thought that far ahead. 4 fresh chillies, seeds of 8 cardamom pods, 5 fat cloves of garlic -peeled, 1 tsp caraway seeds, 1 tsp whole black peppercorns, a bunch of fresh coriander or half coriander and half parsley, 1 /2 tsp salt, 100ml olive oil. A squeeze of lemon or lime juice (optional).

Take the stems off the chillies, deseed if you wish, and chop roughly. Put all the ingredients in the processor and blitz until it is the consistency of a sauce or dip.