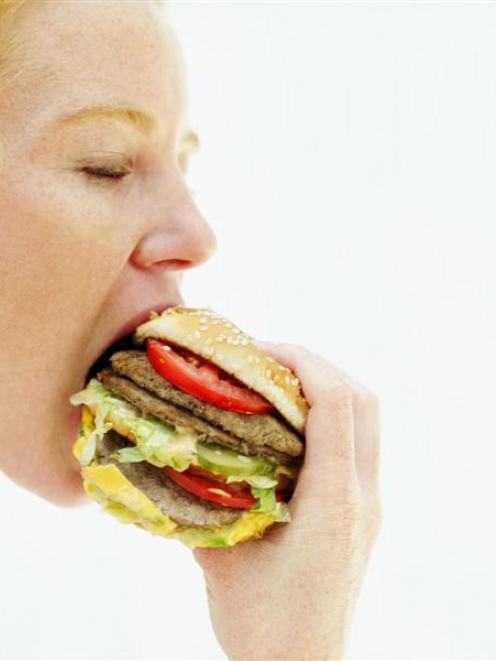 We're all fairly familiar with the fat facts by now. The fact is we are, as a nation, too fat.

Among the usual suspects behind this turn of events is fast food. We are eating too much of it. Consumer NZ estimates takeaway sales have increased by 88% since 2002.

The average New Zealand household now spends $37 a week on takeaways, which is $9 more a week than we spend on domestic fuel and power.

In this, we appear to be following the example of the United States.

In his best-selling book Fast Food Nation: The Dark Side of the All-American Meal, New York journalist Eric Schlosser wrote that fewer meals were being cooked in US homes as the steady decline in the hourly wage of the average worker meant more American mothers were working outside the home.

The US is now the world leader in the fat stakes. More than half of all adults there are obese or overweight.

In an effort to further underline the cause of all this weight gain, Science Daily magazine this year conducted an experiment with 18 slim, healthy people.

The group ate at least two fast-food meals every day while exercise was restricted to no more than 5000 steps daily. At the end of the four weeks, they had put on an average of 6.5kg.

Five increased their weight by 15%, and one person put on an extra 12kg in just two weeks.

Otago District Health Board professional director for dietitians Sue MacDonell says there are many reasons for the trend.

"Anecdotally, we're seeing an increased amount of food being prepared outside the home. It appears people don't have cooking skills like they used to. People are also a lot busier. Food can be one of those things that's squashed in when there's time," she says.

"Families don't sit down to eat together anymore. When families have a lot of commitments after school it can be easier to grab something quick and easy.

"Personally and professionally, I'm not against takeaways. There is a place for fast food. But, if you're eating takeaways every day, then it's not a good thing. It's about making wise choices when you do have takeaways," she says.

Fast-food companies such as McDonald's, with its child-friendly marketing, are often cast as the bad guys in all this.

The company has said its advertising icon, Ronald McDonald, is now more widely known among children than Jesus. It has about 30,000 outlets, with 2000 new ones being added each year.

The problem isn't confined to fast-food chains. New Zealanders chomp through tonnes of fish and chips every year, and pizza sales in this country have grown by 142% in the past five years.

But the game is changing.

Many of the fast-food chains now provide "healthy options", and the likes of the Subway chain market themselves as an "alternative to traditionally greasy fast food".

It markets eight subs with 6g of fat or less.

Subway is the world's largest submarine sandwich chain, with 30,175 restaurant franchises in 87 countries, of which 202 are in New Zealand. Its worldwide sales totalled US$11.3 billion last year.

There are four franchises in Dunedin and the chain is growing in Otago.

Subways opened in Milton in April and Balclutha in May, while Alexandra, Wanaka, Queenstown and Oamaru also have a Subway franchise.

"Subway has some good choices, but it also has some low-fibre, high-fat and high-salt choices," Mrs MacDonell says.

A sachet of McDonald's Caesar dressing contains 13g of fat, which is more fat than a regular hamburger.

The KFC chicken fillet garden salad with Caesar dressing has 15g of fat and more than 1000mg of sodium.

Two pieces of KFC give you nearly 30g of fat, which includes 8g of saturated fat.

Burger King's avocado and garlic dressing will add more than 430kJ and 10g of fat.

"It's great that fast-food chains are offering healthy choices. But they need to be priced competitively, promoted through special offers and taste good. This is where many of the major chains fall down," Consumer NZ research manager Belinda Allan says.

There is reason to hope our children's future will not inevitably be coated with fatty salad dressing.

More than 3000 New Zealand primary schools and early childhood educators have enrolled to teach the 5+ A Day curriculum.

In addition, a further 485 schools receive fresh fruit daily as part of the nationwide Fruit in School Programme.

In Otago, 62 primary schools have joined the 5+ A Day programme and are teaching it as part of their curriculum.

"Schools have done a great job. If we can change the knowledge of children, then we know that influences what happens at home," Mrs MacDonell says.

More than 90% of children understand that 5+ a day means you should try to eat five or more servings of fruit and veges every day.

Doing it better
Consumer NZ tips for making a healthier fast-food choiceFight the urge to super-size.

• Bigger is not better and can cost you a lot in extra fat, sugar, and kilojoules. Watch the dressings.

• Regular soft drinks are full of sugar and kilojoules and have no nutritional value.

• Go easy on pizza toppings and choose a thin and crispy base. Cheese and processed meats add extra fat and kilojoules to pizza.

• Beware of fish and chips. One piece of battered fish can give you 30g of fat.