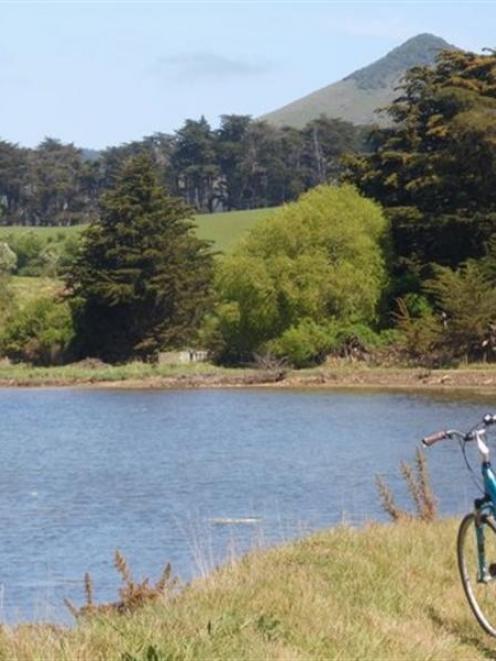 Papanui Inlet offers a comfortable ride for the beginner cyclist. Park the bike and enjoy the surroundings. Photo by Meg Davidson.
The unsealed roads skirting the Otago Peninsula's tidal inlets offer wonderful opportunities for bikers of all ages and stages.

Their gentle gradient and infrequent traffic make them particularly suitable for beginners.

Hoopers Inlet is a deep indentation in the peninsula's southern coastline, just a few kilometres over the hill from Portobello but retaining a startling feeling of isolation.

The wild Pacific passes through the narrow gap between Sandymount and the sandy flats of Allans Beach to become a peaceful tidal estuary, a wide bowl ringed with green hills where birds swoop low over the water and fossick along the mudflats.

The road is a narrow brown ribbon hugging the water's edge, in places barely above the high tide mark.

Go there now to experience this strange, but beautiful landscape before global warming kicks in.

Captain James Cook's charts after a 1770 visit show the inlet as an unnamed bay.

By the early 1800s, sealers were visiting the Otago coast and it might have been Charles Hooper, chief officer of English sealing ship Unity, who named Hoopers Inlet.

Excited by the potential of its twin inlets, he planned townships at both to service the ships he expected to anchor there.

Not being a seaman, he didn't realise they were far too shallow for ships to enter; the settlements didn't eventuate.

However, in the 1860s many settlers bought 100-acre (40.5ha) lots from Kettle's plan and cleared the podocarp forest for farmland.

In the 1860s, the Dickson family had a sawmill near Allans Beach Rd where it comes over the hill from Portobello.

A tramway was built across the inlet to carry logs to the mill and at low tide the remains of this can still be seen: two parallel rows of stumps heading across the mudflats towards the road.

Despite its rugged contours and poor, stony soil, the peninsula was alive with farming activity until the Taieri swamps were drained from the 1870s.

Today, derelict buildings and lines of raggedy macrocarpa mark the sites of abandoned homesteads, while a handful of more recent houses perch above the inlet, sited for sun and outstanding views.

Parking at the western end of the inlet, beginning bikers would take less than an hour to ride to Allans Beach.

Walk and picnic at the beach before returning.

To the north, Papanui Inlet offers an easy ride of a similar length.

Park at a group of three boatsheds on Cape Saunders Rd and bike around the inlet to the Okia Reserve, where there is much to see: the Pyramids, fascinating conical hills of columnar basalt with caves on the northern side of the smaller one; Victory Beach, named after the wreck of the Victory, whose flywheel is still visible at the south end of the beach at low tide; sealions; and extensive revegetation carried out by the Yellow-Eyed Penguin Trust.

If you can lift your bike over the stile, it is possible to bike to the Pyramids.

The grassy vehicle track with its dips and ruts offers easy mountain biking.

Papanui Inlet was the site of Maori settlement for centuries, and the scene of bloody feuds between the Ngati Mamoe and Ngai Tahu people.

Papanui Inlet ride: 6.4km from the southern end of the inlet to the Okia Reserve car park.

How to get there:

When the road reaches the inlet turn right; there is parking at the end of this short stub of road.

Papanui Inlet: Via Hoopers Inlet by Sheppard Rd or Cape Saunders Rd, or via lower Portobello by Weir Rd.

Narrow (in some places single lane) dirt and gravel road with some potholes and corrugations.

The gradient of both rides is negligible apart from a slight rise towards Allans Beach on the Hoopers Inlet ride and a small hill near Okia on the Papanui Inlet ride.

The gravelled shoulder of the road slopes away towards a ditch in places, so be careful when pulling over to let traffic pass.

What you will see:

• An astounding number and variety of birds, particularly on Hoopers Inlet. A plaque erected by the Otago Peninsula Trust lists 19 birds of the peninsula inlets. While cycling, I spotted oyster catchers, pied stilts, pukeko, mallard and paradise ducks and chicks, a kingfisher, black swans, a blue heron and - most exciting of all - a royal spoonbill.

• Harbour Cone with Mt Cargill behind it.

• The Allans Beach Wildlife Management Reserve (you can walk through it, but not bike).

• Salt marshes (likewise, not for biking on).

• Reflections if the tide is in.

• Remains of Hoopers Inlet tramway if the tide is out.

• Goats, sheep (white and black) and lambs in season.