Study no holiday for participants 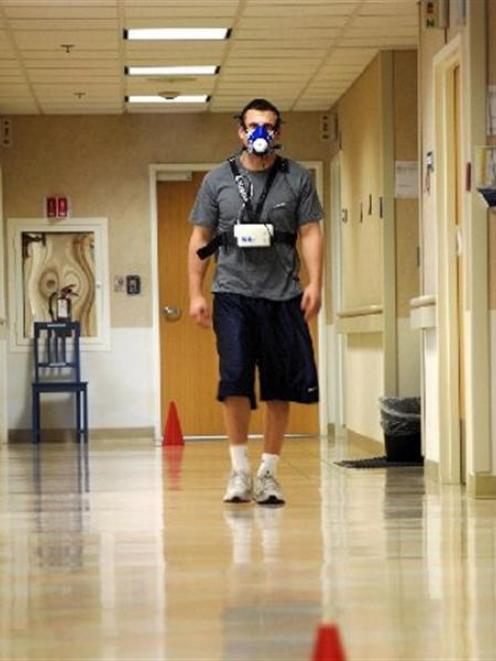 A volunteer walks a hallway wearing instruments that measure oxygen consumption as part of a 50-year-long study to provide data on the ageing process. Photo by Washington Post/Institutes of Health, National Institute on Ageing.
Every year, hundreds of people travel to Baltimore for an unusual purpose.

They are not there to tour the city's aquarium or sample its fabled blue crabs.

They are not in search of fame or money.

Other than free lodging, they receive nothing in exchange for their visit, which entails a certain amount of discomfort.

No, these people, some of whom have made this journey for decades, believe the trip is worth their time and expense because how they live - calculated according to everything from the strength of their grip to how many apples they consume in a month - may offer clues to how the rest of us might live better, longer, healthier lives.

These individuals - homemakers, retirees, doctors and myriad others - are participants in the Baltimore Longitudinal Study of Ageing, the country's longest-running study of ageing.

Since 1958, more than 1400 volunteers have agreed to regularly undergo physicals and memory and other screenings conducted by the study's doctors.

The resulting data spans more than half a century and is a gold-mine for researchers interested in the ageing process.

Because of the study, scientists know that signs indicating a person could be at risk for dementia and other cognitive diseases may appear 20 years before symptoms emerge.

Findings that today are common knowledge (that exercise can help reduce high blood pressure, for one) can be traced back to the study's annual physicals and the data analysis done by the study's scientists.

The study is one of many projects being done by the National Institute on Ageing, but the study itself is a rarity.

Few institutions will undertake such an extensive venture, largely because the commitment required from individuals is enormous, says the study's director, Luigi Ferrucci.

It is not just researchers who toil for years sifting through mountains of data.

Baltimore Longitudinal Study of Ageing participants also are devoted to helping researchers fulfil the study's goals: One person has been enrolled for 47 years.

The oldest participant is 102 and has made the required pilgrimage to Baltimore regularly for 38 years. "Participants really, really love the study," said Ferrucci.

"They feel they are making a contribution to science, and they feel like ageing is such an important and understudied issue, anything they can do to help, they want to do."

Participants come from as far as Norway.

Some even give their bodies to the autopsy study. "It's a chance to make a unique contribution to research on ageing," said Richard Sprott, of Potomac, one of the participants, "since this is the only research project of its kind in the world."

As understanding of ageing has changed, so have elements of the study.

Researchers recently incorporated a new component into their research, Insights Into the Determinants of Exceptional Ageing and Longevity study (Ideal), an effort to uncover the secrets of those who age exceptionally well: Think 80-year-olds who ski and jog or 90-year-olds whose hearing and memory put a 30-year-old to shame.

Mr Ferrucci estimates only about 0.5% of the population has such abilities.

For three days, the fifth floor of Harbor Hospital in Baltimore will serve as home base for the many participants who come for their physicals.

Most will stay here at the hospital in comfortable but not particularly plush rooms.

Proximity is important because researchers want them to be available for the battery of tests they will undergo over the next 48 to 72 hours.

Down the hall is a small kitchen area stocked with fruit and pretzels.

The atmosphere is soothing. The magazines plentiful. The staff friendly. There is homework.

Along with athletic shoes and casual clothing, participants are asked to bring with them a food diary that details everything they ate in the previous three days.

Yes, some people have been known to temporarily clean up their diet - a tendency that is noted in the 20-minute introductory video sent to people before they arrive. "Please report what you actually eat, not what you think you should be eating," it says.

This is no holiday.

During their stay, participants will have a physical that goes well beyond sticking their tongues out and saying "Ahhhhh".

They rarely will sit for more than 30 minutes before they are whisked away for another exam or stuck with another needle.

Mr Sprott, now in his 12th year in the study, confirms that the pace can be brutal.

In addition to collecting blood and urine, researchers might also take samples of the participants' breath.

Researchers will evaluate a participant's grip strength, which can predict whether someone might be at higher risk of complications after surgery or more likely to die prematurely.

The work done by the study's scientists (more than 800 scientific papers) runs the gamut from the impact of ageing on major organs to its effect on personality, and it has become a standard reference on ageing.

The researchers were able to disprove the long-held belief that people get crankier as they age.

Using data collected from the study's participants, they found that personality traits do not generally change much after age 30: People who were cranky at 27 were likely to be cranky at 87.

Researchers also found that older people were better able to handle stress than their younger counterparts, who tended to cope by becoming hostile or retreating into fantasy worlds.

The possibilities that such data offer are endless.

"This a treasure," Mr Ferrucci said.

"Who else is going to do a study that's going to last 50 years?"