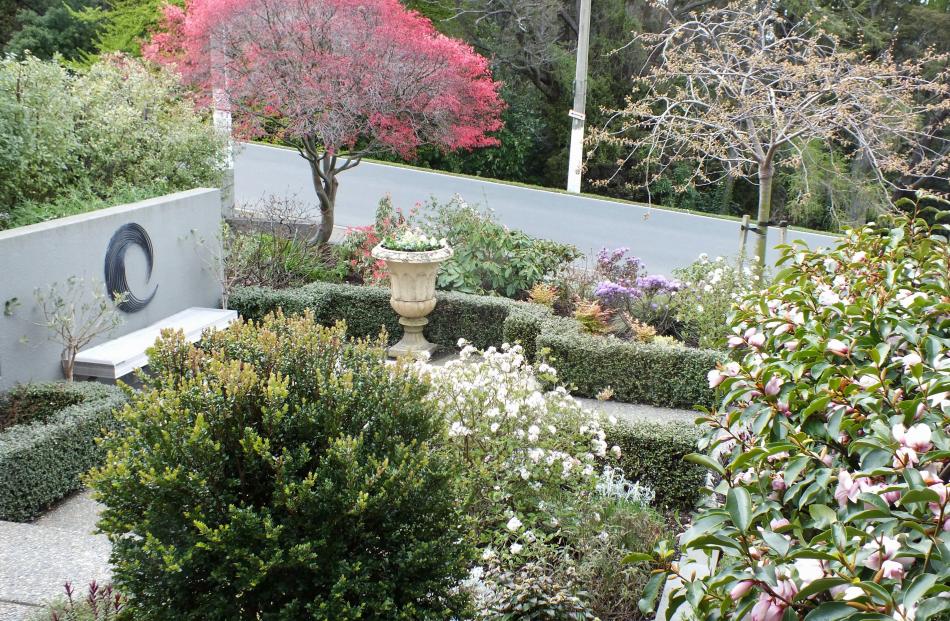 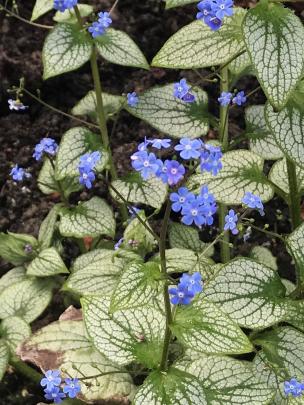 Brunnera Silver Heart looks lovely even when not displaying its sky-blue flowers. 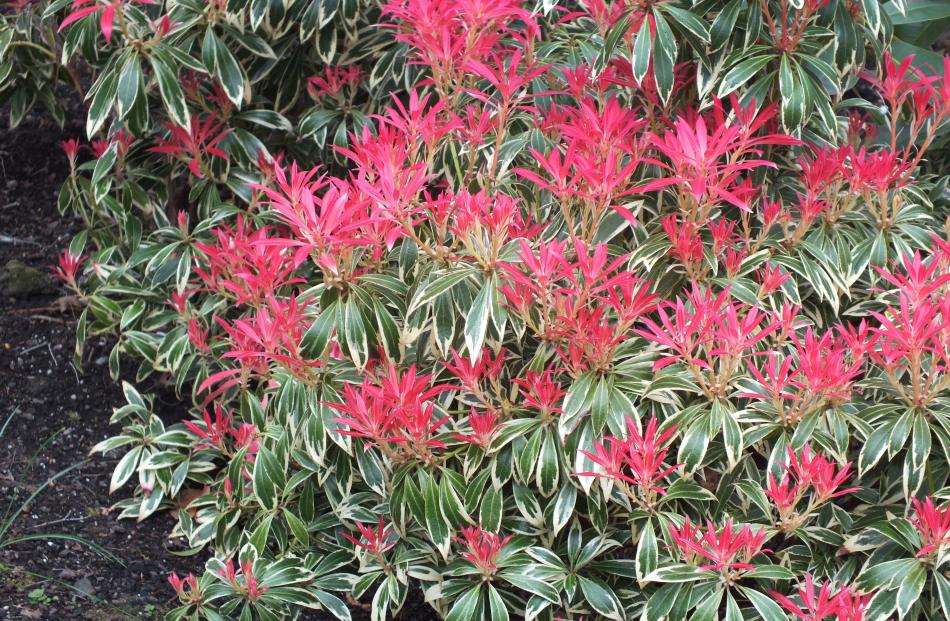 The new foliage of Pieris Flaming Silver is bright pinky-red before leaves change to the distinctive variegated form. 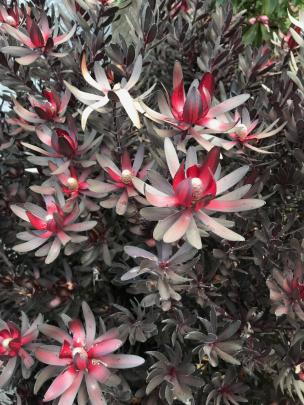 This dark-leaved Leucadenron is a favourite of Heather's because it looks good all year round.

Using a landscaper was an inspired decision for Heather McKenzie.

"I wanted a landscaper who would do everything [and] I interviewed three or four different outfits before I got someone on my wavelength," she says.

The company was Dunedin-based Design & Garden Landscapes Ltd and so successful was the work on Heather's Mornington property that the firm won several major awards for it. 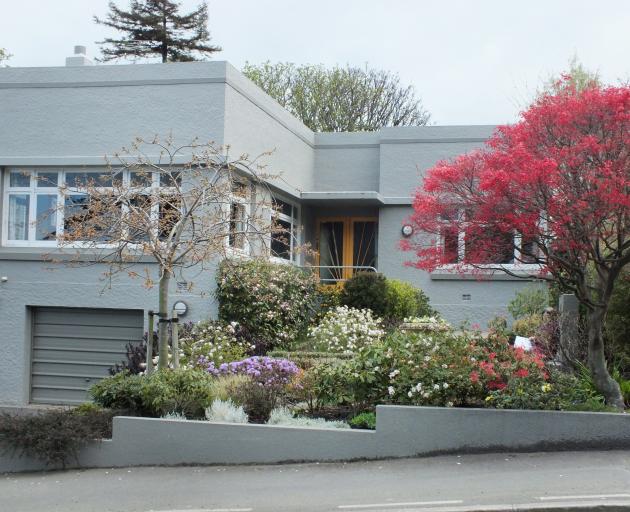 The garden has been redesigned to better fit in with Heather McKenzie's Art Deco house. Photos: Gillian Vine
Design & Landscape took out the best landscape for horticulture in 2016, along with three gold awards - for design, horticulture, and construction.

Heather bought her Art Deco home in 2001 but because she was working in Wellington, she rented the house and only began revamping the section when she returned to live permanently in Dunedin.

Her first priority was to double the width of the drive but at the same time "make a statement to be in keeping with the Art Deco house and its predominantly straight lines.

"By calling in the landscaper, it gave me a chance to start afresh." 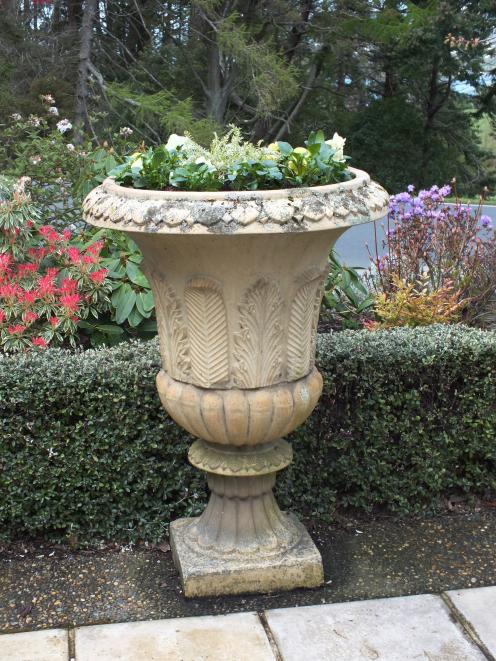 Different plants have been tried in this urn to get the optimum effect.
It took more than a year: after returning to Dunedin at the end of 2012, she hired the landscaper in January 2013. In February-March that year, plans were drawn up, hard landscaping was undertaken over the winter and in the spring of 2013 planting was done.

"It was the landscaper's choice of plants and he certainly introduced things I would not otherwise have thought of. He was very good at saying, `How about this or this?'

"On the plan, I wrote the names of all the plants, as you don't think you'll remember them all," Heather says.

She also uses a photograph album in which to keep plant labels, a handy way of recording variety and species names.

Because the front section originally had a significant slope, much of the initial landscaping involved creating small retaining walls so the garden became a series of flat surfaces with wide paths between them.

"It was quite a slopey piece section, hence all the retaining walls. The wide pathways were designed so two people could walk together chatting side-by-side," she says.

Some existing plants were saved, often moved to different locations, like the roses that are now in a raised bed behind the house.

Pieris Flaming Silver is now a feature in a new spot. Fresh growth is bright pinky-red before the leaves change to the evergreen shrub's distinctive variegated form. 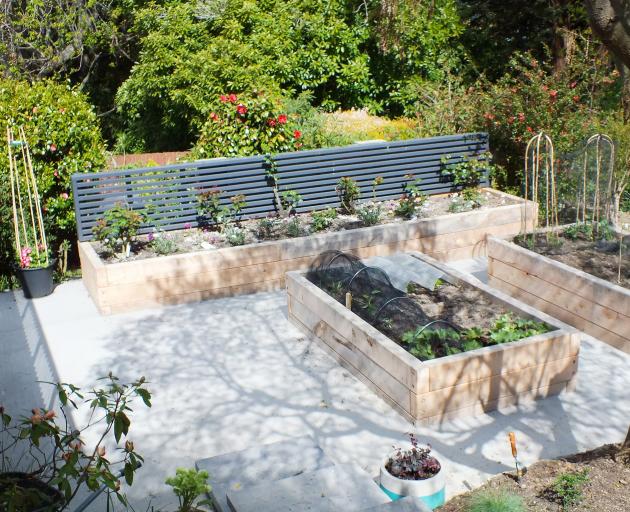 Recent developments in the rear garden include raised beds for roses and vegetables.
More foliage colour comes from Berberis Rosy Glow, Nandina and a purplish Leucadendron that Heather loves for its year-round appeal.

"It looks great in winter and is good for picking," she says of the Leucadendron.

Winter-flowering loropetalums are her new love and she is making increasing use of the small shrub with its pretty plum-coloured foliage.

Rhododendrons have been chosen to bloom from September to November-December, so there is plenty of colour through spring.

Adding to the spring burst of colour are an Acer and flowering cherry, Prunus Shimidsu Sakura. They look as if they have been there for years but were actually added as part of the landscaping.

"They were extravagances but I don't regret doing it," Heather says of her decision to buy the large-grade trees.

A second flowering cherry on the other side of the drive gives balance. Here, Heather has made use of an old technique, "borrowing" from her neighbours. They have a mature Prunus autumnalis cherry which leans over her drive, so Heather has made use of its pale pink flowers by planting light mauve Hoppy rhododendrons underneath the tree on her own side.

Another spring feature is scented Michaelia Patons Pink, six of them tightly packed for maximum impact, on the wall near the front door . Of the delphiniums at their feet, only one remains, a reminder that gardens do not remain static.

Doing just too well was Dianella, a small flax-like native. It became a problem in the damp side bed, as it spread far and wide and had to be removed. Successes in this area include boronia and a selection of brunneras, including Brunnera Silver Heart.

A seat in the front garden is perfect on summer mornings, when Heather can enjoy a coffee and the view out to sea.

An informal hedge behind the seat screens her from cars in next door's drive. She says it is important to monitor the height of the hedge so it is the minimum height to act as a screen but not so high but blocks the afternoon sun.

Looking around, Heather says: "The aim was to make a small garden look bigger and give good looks all year around."

She and her landscaper have definitely succeeded.