"The result was that Sam has gifted $15,000 to the Friends committee to be used for a future development project in the botanic garden," FDBG president Sue Lambie said.

Foley, who lives in North Dunedin, drew inspiration from the botanic garden and its rhododendron dell, for the exhibition.

He was delighted that the buyer of the painting he donated was a friend, who had introduced Foley to Karl Maugham, who specialises in garden paintings. 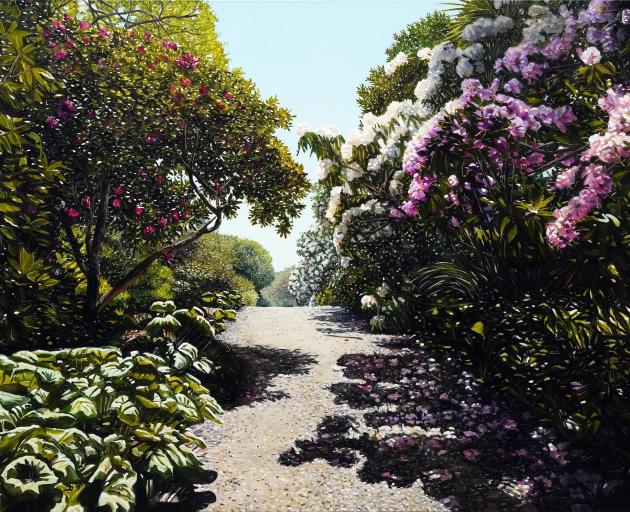 Proceeds from the sale of Sam Foley’s painting "Rhododendrons" have been donated to Friends of the Dunedin Botanic Garden. PHOTO: SAM FOLEY
Although the two men’s styles are very different, Foley felt he should ask Maugham’s permission before beginning the "Last Light in the Gardens" series. This was received without difficulty and led to the 16-work exhibition.

As well as groups of paintings for thematic presentations, Foley also undertakes some commissions "and works that don’t fall into an exhibition ... series".

He enjoys the commissions, saying: "Its a fun process, meeting and working with the clients."

Working 8am to 4pm in his Dowling St studio, Foley has his next three exhibitions "pretty much sorted out". See http://www.samfoley.co.nz for details.

As for the donation to the FDBG, a decision on what project it will support is yet to be announced.

"Sam and [DBG chief] Alan Matchett and I have had a discussion on possible options for a targeted project," Sue Lambie said.

She hoped that the Friends annual plant sale will once again help the group’s funds, although Covid-19 has created some issues in propagating plants.