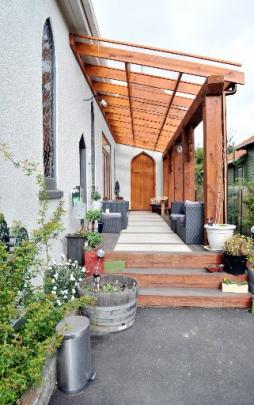 The new deck on one side of the church is accessed through French doors and framed with big macrocarpa beams. 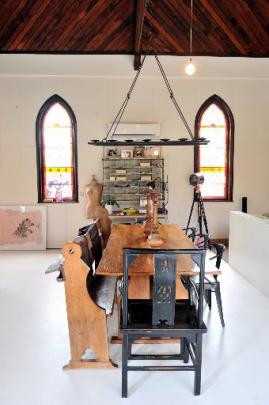 The furniture is a mix of old and new, rustic and industrial. A floral rose window high up in the gable. 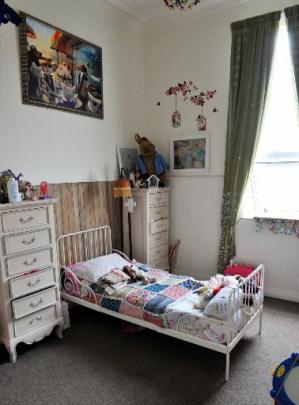 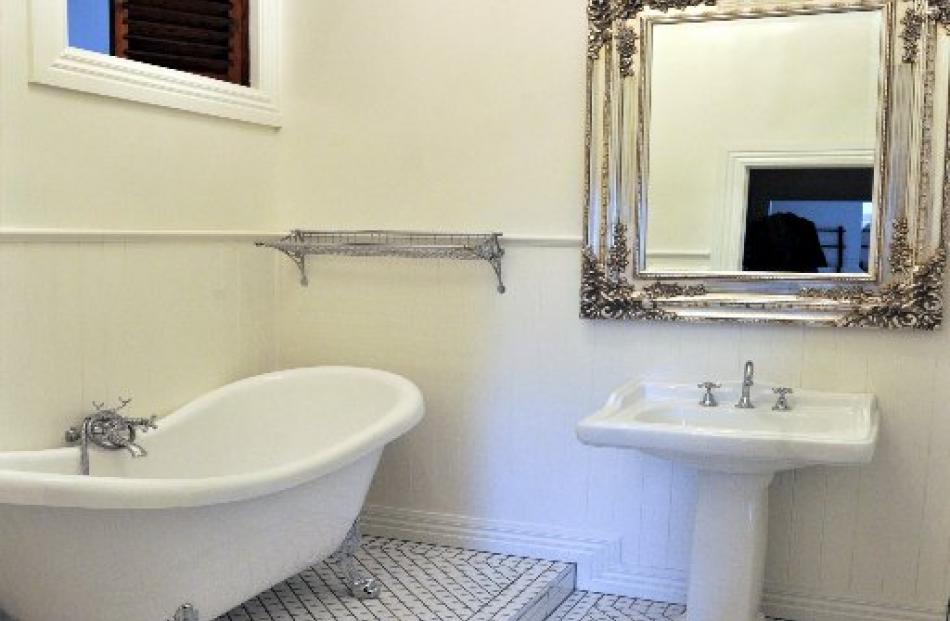 The ensuite bathroom with its clawfoot bath. A fire engine bed has right of way in MacKenzie's bedroom. 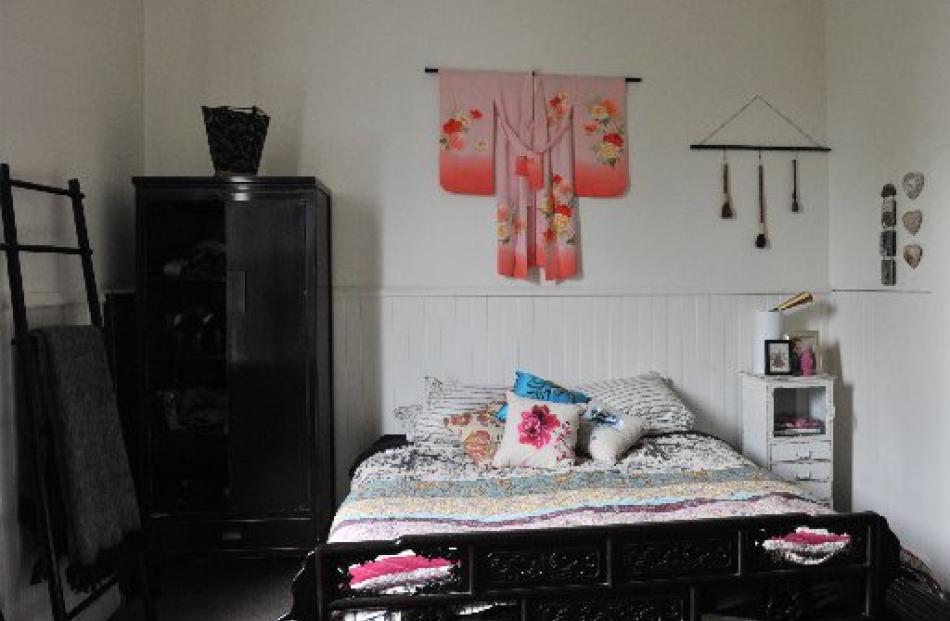 The main bedroom features oriental furniture and fabrics that Jaimee bought on a work-related trip to Bangalore in India. 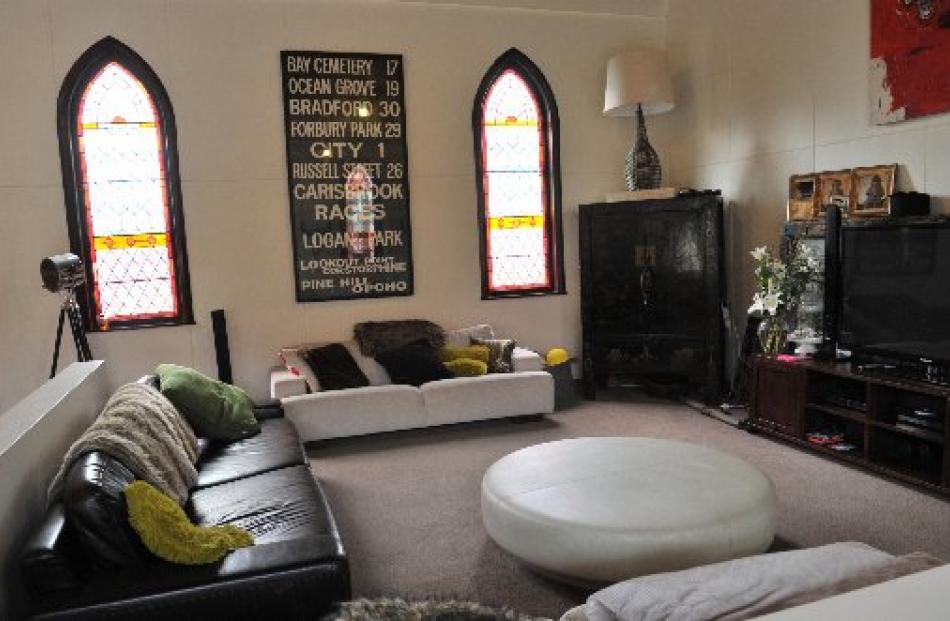 A bus blind on one wall refers to Dunedin suburbs. 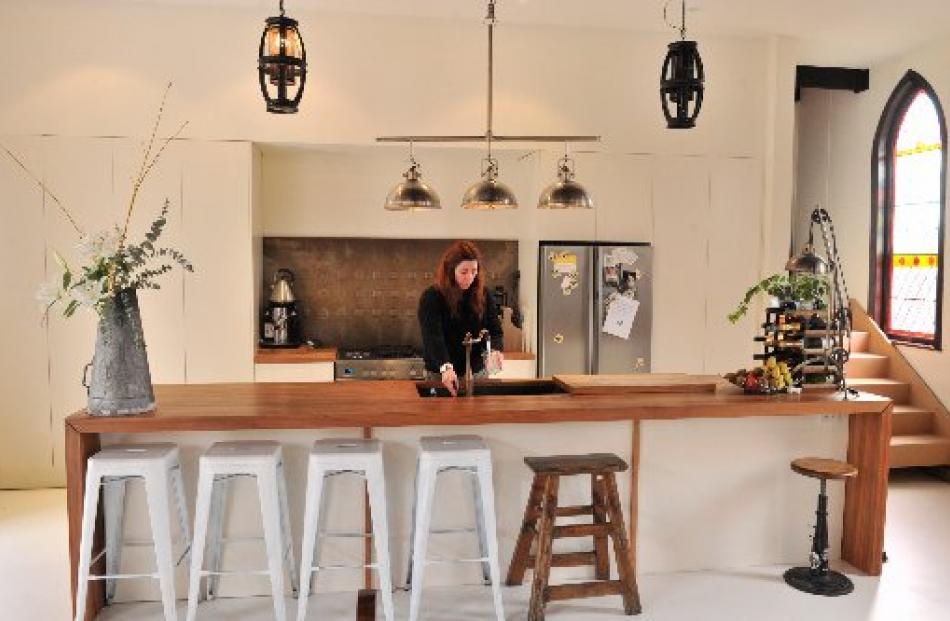 Jaimee Whiston in the kitchen. The stairs at right lead to the new mezzanine floor. Photo by Linda Robertson.

When Ryan Whiston agreed to look at an old Dunedin church as a possible family home it had nothing to do with divine intervention.

It was wife Jaimee who begged him to visit after noticing that the former church and dance school near their St Clair home was for sale.

Ryan's response when she suggested they inspect the property was, ''No way,'' she recalled.

''To be fair, he'd just finished a big renovation of our previous house and was pretty exhausted. I had to twist his arm to get him on the property ... but once I got him here, he saw the windows and the timber and came to the idea that maybe it could work.''

After the church closed, the McCay School of Dance had moved in so the dark interior held 20 years worth of props, tutus and other effects, she said.

But the soaring tongue and groove ceiling and exposed beams stood out while the coloured leadlight windows were particularly striking from inside.

''The windows totally sold it for us.''

Originally a weatherboard building, the property served as a Catholic Apostolic church in Maclaggan St.

When a second coming promised by the church's founder failed to materialise, the ministry structure collapsed and ownership of the building transferred to the Anglican Church.

In about 1927, it was moved across town to Hargest Cres, where a hall was later added at the back and the exterior roughcast; its new name of St Peter's the Less emphasising its link with the Anglican Church in Hillside Rd.

According to St Clair: A Resident's History, by Barbara Newman, it also housed a kindergarten run by Miss Lindsay Burnside and known as ''the school of love''.

After buying the property from the dance school near the end of 2009, the Whistons spent four months getting it to the stage where they could move in with daughter Nova (now 5) and son, MacKenzie (now 3 but then only a newborn).

''It was pretty much a blank canvas when we got it - two big open halls - so it was really cool to work with ...'' says Ryan, who has his own building business.

''I'd usually kick off about 7.30am and sometimes I'd work through til 2 the next morning.''

As part of the conversion, new openings were created in the church walls. French doors along one side let in natural light, while double doors at the back led to the former hall.

The church became an open-plan living area, with a mezzanine floor at one end.

The hall was divided into four bedrooms: the master accessed through oversized carved wooden doors, with a walk-through wardrobe and bathroom beyond.

However, the tiny kitchen in the hall Right: The former church, seen from the mezzanine floor. was their only cooking facility for more than a year until a new kitchen could be installed at one end of the living area.

When the chimney for a new wood burner went in, Ryan took the opportunity to sweep down the tongue and groove ceiling and beams - the former roofer unfazed by the fact it was 9.2m from the floor to the gable.

A trickier task was putting in the steel beam designed by Jaimee's father, a structural engineer, to support the mezzanine.

Originally this was to be one 8.2m-long beam, but it soon became obvious it would need to be made in two pieces and bolted together in the middle. Ryan built the mezzanine first, with a supporting wall underneath to take the weight, while the 470kg beam was fabricated.

''Then we hoisted the beam off the floor of the mezzanine with a pulley system,'' he says.

''We had a scaffold under it as well so it was only really the last metre that we actually had to muscle it on [to posts at either end].''

Structurally, the building was in good condition but insulation was added under the floors.

''That made a huge difference because all the land out here is so tidal. You only have to dig down about 700mm and you can see the tide going in and out.''

At almost 390sq m, including the mezzanine and deck, the building easily accommodates the couple's eclectic pieces of furniture, which include everything from rustic tables and oriental cabinets to industrial-style lights.

A wooden pew and ornamental crosses are a nod to the building's religious past, while wooden shutters were sourced from Dunedin's former Lone Star Restaurant and a bus blind highlights local destinations such as Forbury Park.

''It's such a good space for the kids to run around in and if it's raining, they can have their bikes inside,'' said Jaimee, who owns a hair salon in St Clair.

''We're quite social people as well, so needless to say, there have been quite a few parties here.''

Though now a comfortable family home, the former church is also a work-in-progress.

A new roof is needed and the painted particleboard floor the dance school laid - a practical option with young children - will eventually be replaced by timber flooring.

The mezzanine will become Ryan's office and the kitchenette in the former hall a second bathroom.

One other job remains.

Impressed on their first visit by the beautiful leadlights, the couple were delighted during renovations to discover another window which the previous owners had tucked in behind a wall in the original entrance.

''So I took it out and restored it ... I'll relocate it somewhere when I get some time.''