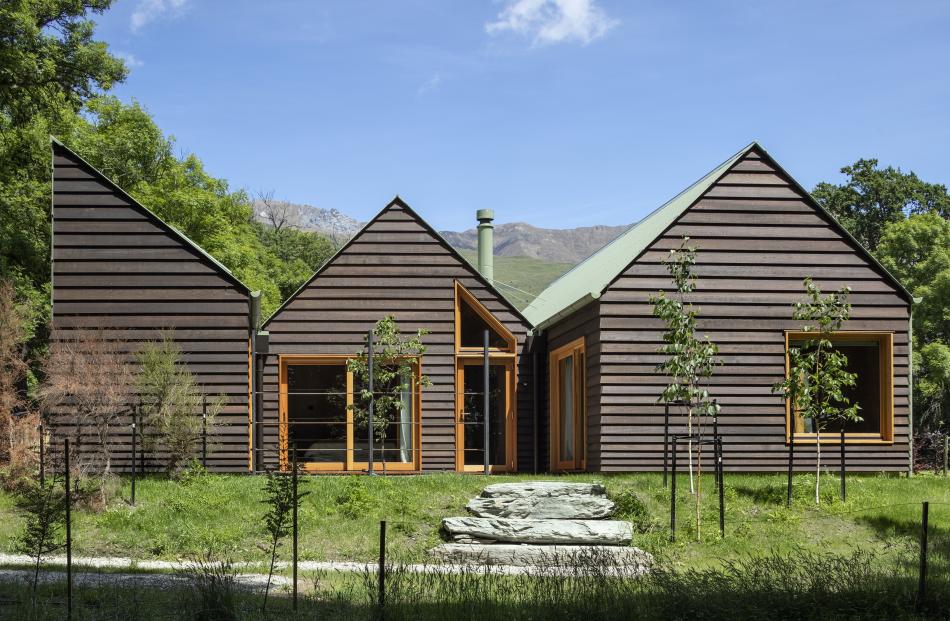 At 150sq m, this Wanaka crib has the intimacy of a small house but can comfortably sleep 10 people. Its design was a collaboration between Pac Studio and Steven Lloyd, of Auckland. PHOTOS: SIMON DEVITT 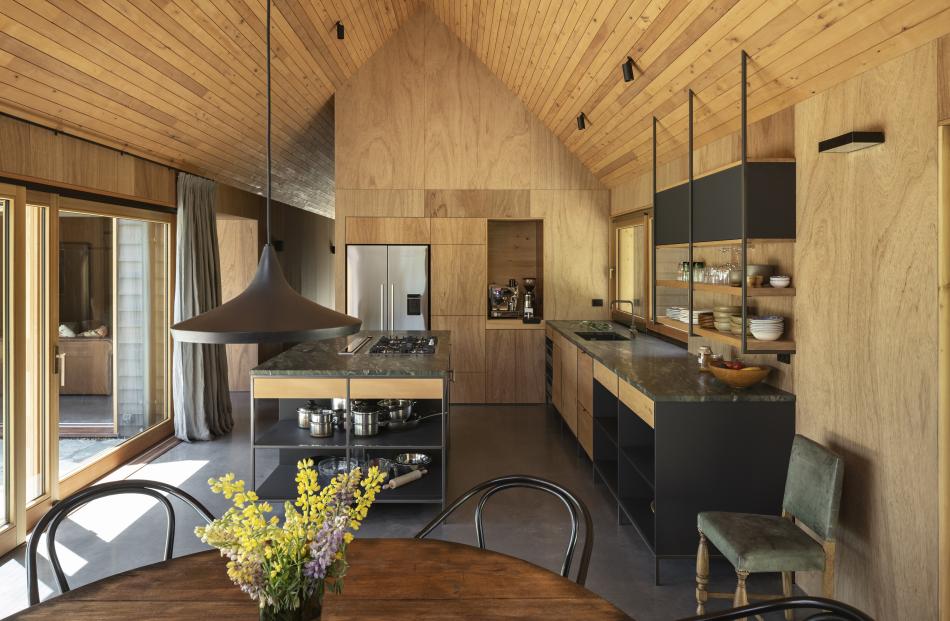 The owners are food lovers so the kitchen was always going to be the heart of the home. 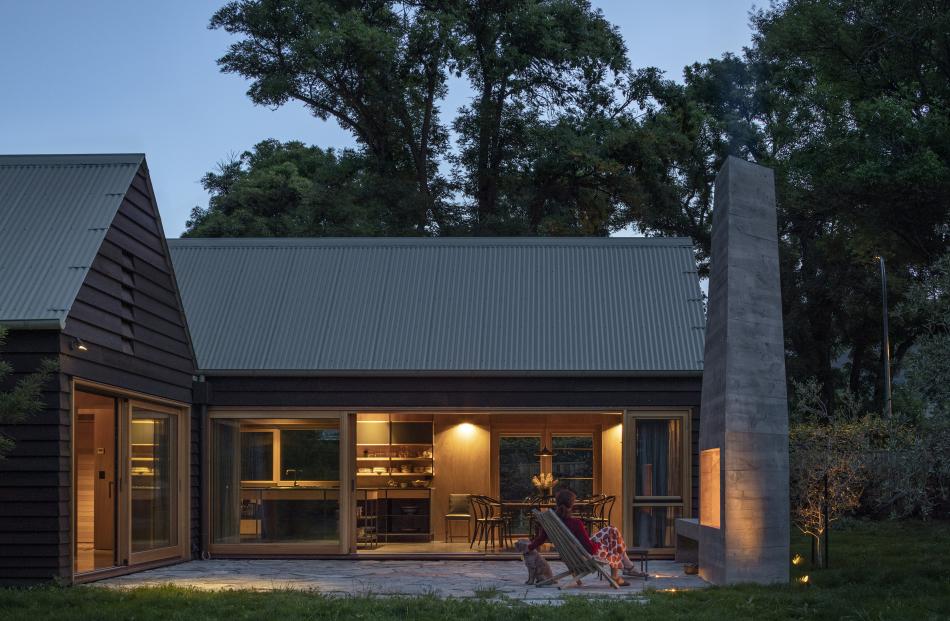 The tall chimney of the outdoor fire contrasts with the home’s horizontal lines. The owners plan to fit an Argentine-style, asado grill so they can cook over coals. 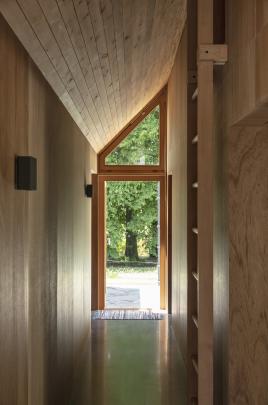 A ladder in the entry leads to a sleeping loft. 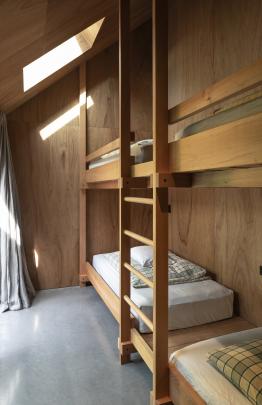 The bunk room, which has its own bathroom, can only be accessed from outside. The owners say they wanted it to be ‘‘a bit of fun’’ and for the occupants to feel like they were on holiday. 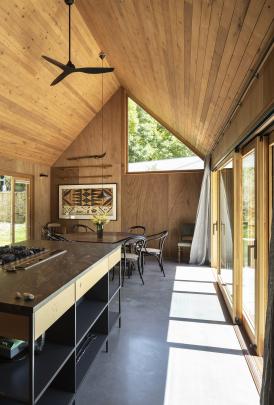 Open shelving features in the kitchen and a framed tapa, in the dining area. 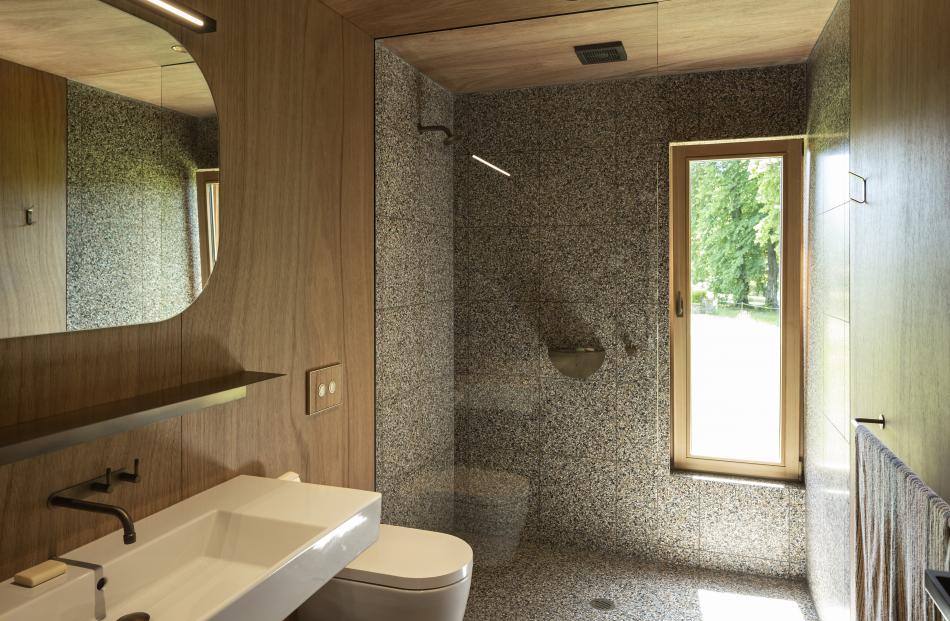 Terrazzo features in the two bathrooms.

The owners of this Wanaka crib wanted a low-key home that felt like a cabin. Kim Dungey reports.

Visitors to this Wanaka crib are sometimes slightly bewildered.

Completed late last year, it already has the feeling of having been lived in for a long time.

"We’ve had friends turn up who knew we were building a house and they’re kind of confused when they’re in it," says one of the owners, Katrina Toovey. "They say it looks like we’ve been in here quite a while."

The homely atmosphere is exactly what Toovey — owner of Dunedin restaurants No7 Balmac and the Esplanade, and husband Kim Maiai, a GP — wanted.

Filled with vintage furniture, it also features native timbers that they had been collecting for years and storing in an old stables.

The architects needed to create the illusion of remoteness on a site that was close to the town centre and bounded by a busy road.
The Dunedin couple had bought the 0.2ha section beside historic Wanaka Station Park when their children were young. However, two decades later the only thing on the site was a hedge they had planted.

"We were both working and busy and the house just didn’t eventuate," says Toovey, who grew up in Cromwell and spent holidays in Wanaka as a child.

"Then Wanaka started growing and we didn’t know if we wanted to be there any longer."

Although they had plans drawn up, the proposed house was too big and too costly so they bought in Ohau and spent 13 happy years holidaying there with their children.

"Two years ago the children all started travelling and doing other things and suddenly Wanaka felt like a nice spot for us to be in," she explains. "We had quite a few friends up there and it was close to an airport for the kids to come back to. We also had a half-acre section quite close to town ..."

"We wanted a cabin feel and a pitched roof ..." Toovey says. "And we didn’t want it to feel like a permanent home so we don’t have any wardrobes in the house — just hooks to hang clothes on in the bedrooms. There’s no en suite. There’s open shelving so you can see pots and pans. Things aren’t tucked away. It’s not all super-tidy." 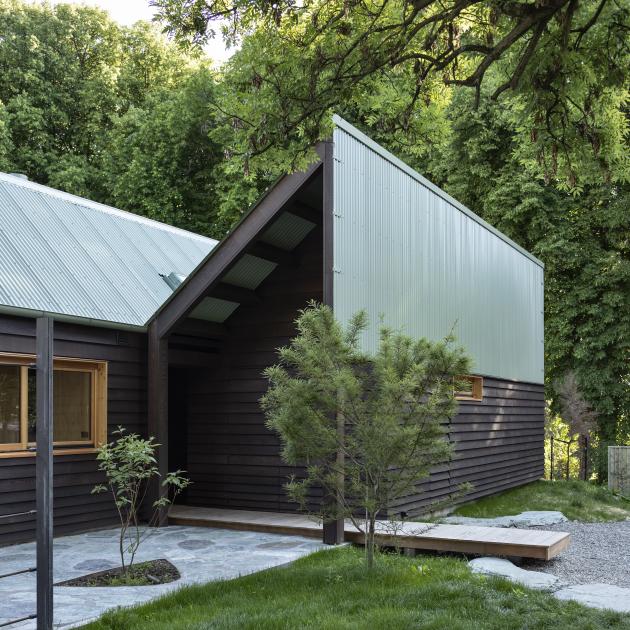 The corrugated iron wall under the chisel roof presents a blank facade to the street. Behind it are the bunk room and a store room for bikes and kayaks.
They also wanted the sense of a small house on a big section, like old cribs where cricket could be played in the back yard: "All the space is in the kitchen and living and then everything else is really small ..."

Pac Studio director Aaron Paterson says the site might seem remote but, in fact, it is close to Wanaka township with a busy main road at the back. Another constraint was the European lime trees that were planted at the entrance to Wanaka Station in the 19th century and that had grown large enough to block light.

As a result, the house turns its back to the road and is located on a man-made rise away from shadows cast by the trees.

The home comprises a pair of 45-degree gables and a half-chisel roof that "slip past one another" to create three private courtyards.

The lounge and dining area spill out to a north-facing patio with an angular concrete cooking fire. The kitchen connects to a sheltered south garden enclosed by espaliered quince. The east terrace provides the only access to the self-contained bunk room.

Because it is a relatively simple building in terms of its form, the architects tried to "push certain details a long way", Paterson says.

The entry is reached via a floating boardwalk, a pop-out window is edged in mustard and the rusticated cedar weatherboards are staggered in size, becoming larger closer to the building’s apex. The weatherboards and green corrugated roof evoke traditional rural sheds, but with a contemporary twist: the roof has a razor-thin fascia. A gable vent uses the gaps in the weatherboards to allow airflow and can be shut from the inside.

Built by Dunlop Builders, the 150sq m home can comfortably sleep 10 people in the two bedrooms, a sleeping loft and the bunk room. 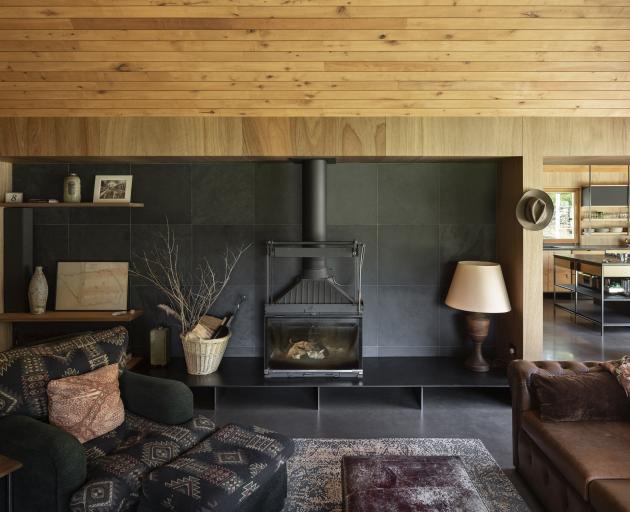 The cosy living area has a Philippe Chemise fireplace and no television. ‘‘We can just [allow] ourselves to enjoy the house and the company of the people we’re with,’’ owner Katrina Toovey says.
Interior linings and joinery are a combination of plywood, beech, kauri and rimu — finished, not with polyurethane, but with a low VOC oil made from sunflower, soya and thistle oils.

The rimu came from the old Earnscleugh school house. Kauri salvaged when the Esplanade restaurant was gutted in 2012 became cabinet fronts and shelving in the kitchen. Tiles, pendants and leather from Toovey’s restaurants were also repurposed. The offcuts of leather were salvaged from No7 Balmac after a fire in 2018 and jigsawed together to be made into a patchwork window seat.

The kitchen has a sightline to the adjacent living room and plenty of space for friends and family to cook together in a relaxed, social way.

"The benchtop is Brazilian granite," Toovey says. "The green caught our eye early on in the planning so was key to choosing the other tones for the space. The hobs are on the island bench as we like facing into the space while cooking."

The only new items of furniture are the dining chairs; the rest was simply transferred from their old place in Ohau.

Toovey says she had mixed feelings about doing that when the house was feeling so "considered". But furnishing with a mix of old and new meant it "immediately felt comfortable and relaxed".

It’s a holiday home where no-one has to worry about damaging white walls or putting their feet up on the furniture.

"We just wanted to enjoy it and not feel too precious about it," she says.