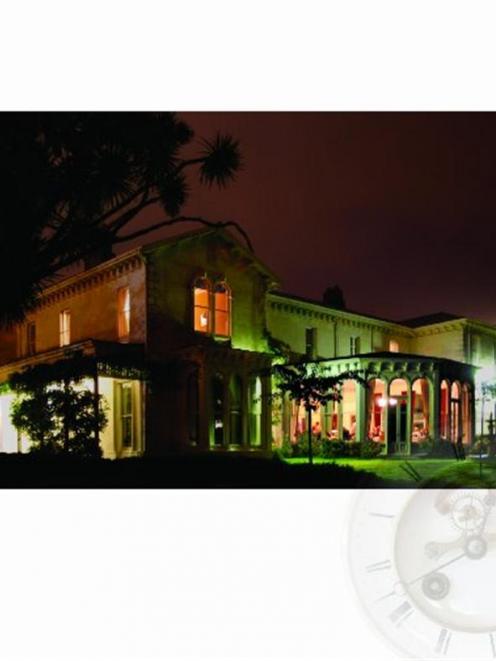 The Dunedin Club remains an exclusive institution more than a century since its inception. Photo supplied.
Fernhill was built for a pioneer whaler, sealer and merchant. Kim Dungey reports.

The mansion the Dunedin Club occupies was built by the colourful whaler, runholder and trader, Johnny Jones, in 1867.

Fernhill contained 25 rooms, including a large drawing room with north-facing windows, and cost 7750 to build - an enormous sum of money at a time when labour was cheap.

Built of Oamaru stone, it was an imposing structure worthy of one of the most prominent figures in colonial New Zealand.

Jones had arrived from Sydney well before the first official settlers, buying the Preservation Inlet whaling station when he was just 25 and soon gaining an interest in several others.

By 1838, he owned the area which became Waikouaiti.

Later, he took up land in various parts of Otago and became a major figure in shipping and trading.

His home base was Matanaka but in 1854 he moved to Dunedin, partly for the sake of the education of his youngest children.

It was Jones' wife, Sarah, who bought the Melville St land and its modest dwelling from the first owner, Captain Edmund Bellairs.

However, she did not live long enough to see the new house completed and Jones himself died only two years after moving in.

Later, Fernhill was leased to the Government as a residence for the governor and any other distinguished visitor who might need accommodation.

The Dunedin Club was formed in 1858 when Dunedin was a growing town short of comfortable accommodation.

The first members were from the Squatters Association, a group of runholders who wanted to avoid Dunedin's boisterous hotels when they visited town for supplies.

After originally renting premises in Maclaggan St and later operating from the Commercial Hotel, the club took over Fernhill in 1874 and immediately added a rear extension which included a large billiard room with bedrooms above.

Club members had a large amount of influence on the growth and development of Dunedin, their ranks including cabinet ministers, mayors, judges, bishops, university chancellors and one prime minister, Sir Julius Vogel.

Some famous people were also entertained at Fernhill.

These included three future kings of England and Antarctic explorers, such as Robert Falcon Scott, Ernest Shackleton and Richard Byrd.

The house was designed by David Ross, a member of the first Dunedin City Council, who was also responsible for the Dunedin Athenaeum and Mechanics' Institute in the Octagon.

Gordon Parry relaxes in the comfortable bar of the Dunedin Club and recalls the biggest change in the club's history.

In 2000, after many years of debate, it finally decided to admit women as full members.

Mr Parry, author of the club history and a member for 45 years, says it was a proper introduction to the 21st century for the club.

While the club had always been "pretty liberal" about having women attend special functions, it was not until the 1950s that they were allowed to dine there three evenings a week, he adds.

The late Murray Sidey was the first to take his wife but when he introduced her to one member, the man turned his back on Betty Sidey, stomped off and was later heard to complain that it was "monstrous" to have women on the premises.

In the dining room, screens were placed around the couple so as not to disturb the gentlemen having dinner nearby.

Opening its doors to women was a controversial move but physical changes have been more subtle.

One reason the property has lost little of its original character is that the major alterations took place about 1875, before architectural styles changed.

There have been later developments, including the removal in World War 1 of the verandas and colonnades that ran along two sides of the house, and the addition in 1993 of a conservatory-style extension to the dining room.

However, the early character of the ground floor rooms has been retained, right down to the massive ceramic urinals in the "gents".

The house is an elegant example of mid-Victorian colonial architecture, set in about 0.4ha of landscaped grounds.

From the grand stairway in the entrance hall to the elaborate plasterwork throughout, the surroundings are opulent.

Engraved tankards hang in the bar while the billiard room is steeped in history, with armed services memorabilia and trophy heads on the walls.

Other facilities include a card room, a reading room, a 1930s squash court and an early bowling green that in 1876 was the scene of the country's first inter-club bowling match.

The nine guest rooms are used by out-of-town members as well as those from 100 reciprocal clubs nationally and internationally.

The gracious dining room is open to members for lunch and dinner, with club functions ranging from wine and food nights to whisky tastings.

Run by three full-time and six part-time staff, the property is also sought-after as a wedding venue but hirers have to be a member or sponsored by a member to use it.

President Geoff Thomas says the club wants to keep the building functional for modern-day events but not lose the heritage features.

A foundation set up by the club was refused charitable status by the Charities Commission but will continue in the hope that members will make donations, he says, adding it is important the building is kept for Dunedin.

"It is for the day-to-day use of members but really is a city amenity as we see it."

A large amount of money has been spent upgrading the ground floor in recent years, Mr Thomas says.

And there is now an annual plan for maintenance to preserve the exterior of the building which, until a couple of years ago, was showing signs of decay.

One and a-half centuries after its inception, the "traditional club with modern manners", still has an air of prestige and mystery.

Membership is by invitation only and though a new dress code introduced in 2001 allows gentlemen to wear open-neck dress shirts, they are still encouraged to wear jackets.

Mr Parry says Fernhill is a second home to many of the members.

Talking business is frowned upon, and the club is a place to relax, enjoy one another's company and entertain visitors.

"It's got style and dignity. We're fortunate to have such a splendid house and grounds."

Historical information from Tradition and Change: the first 150 years of the Dunedin Club, by Gordon Parry.