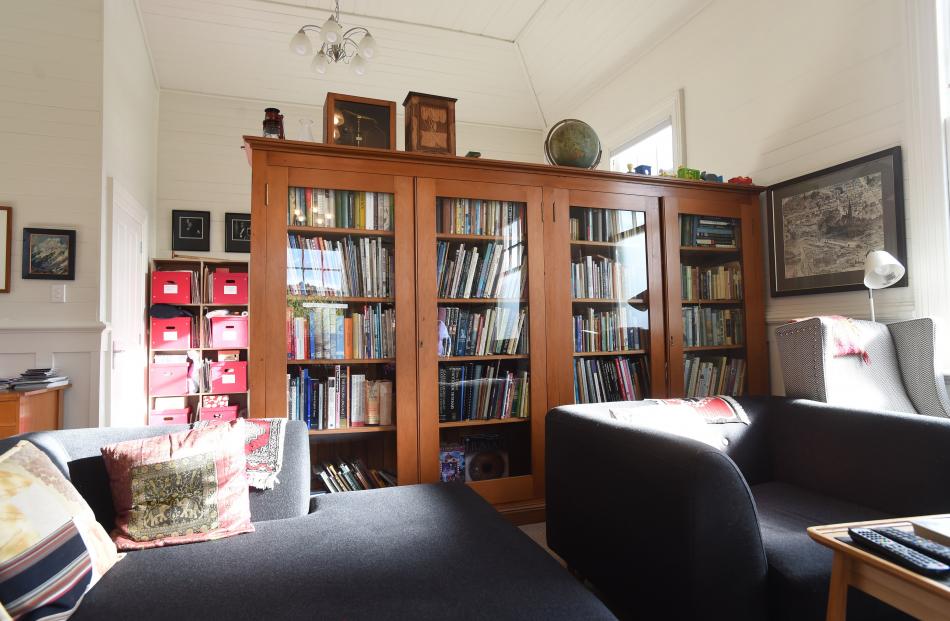 The kauri bookcase that separates the living area from the study was originally in the Hillside railway workshops. "Other women might spend money on shoes, clothes or their hair, but for me, it's books," says Mrs Barta, a former English teacher. Photos... 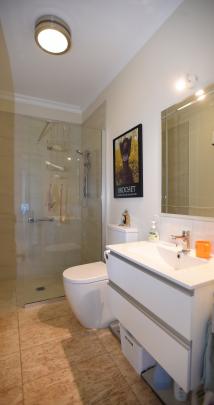 Architect Simon Parker converted a section of the original hallway into this well-appointed bathroom. 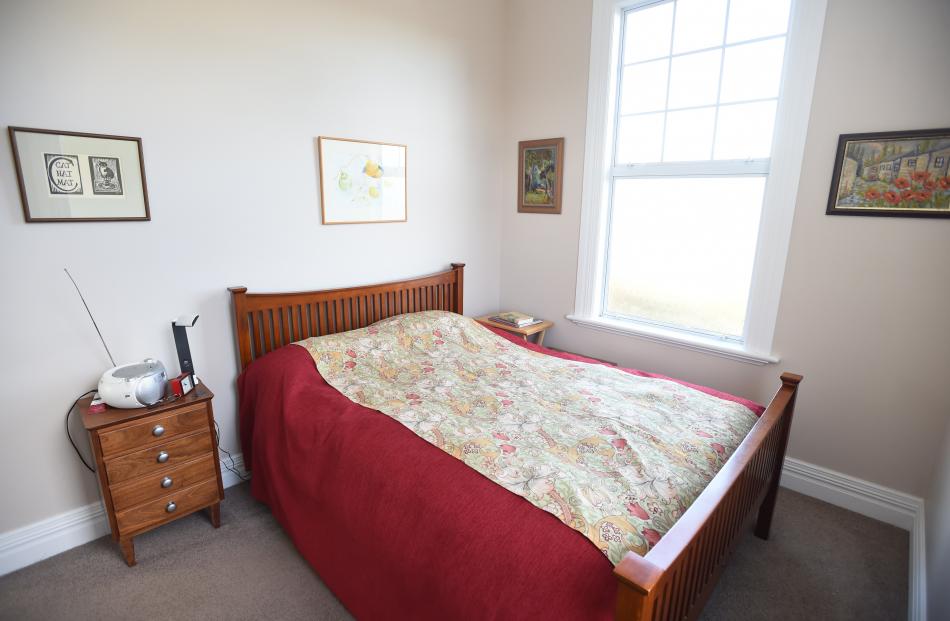 One of the bedrooms was probably originally the judge's robing room and the other, an office for the clerk of the court. 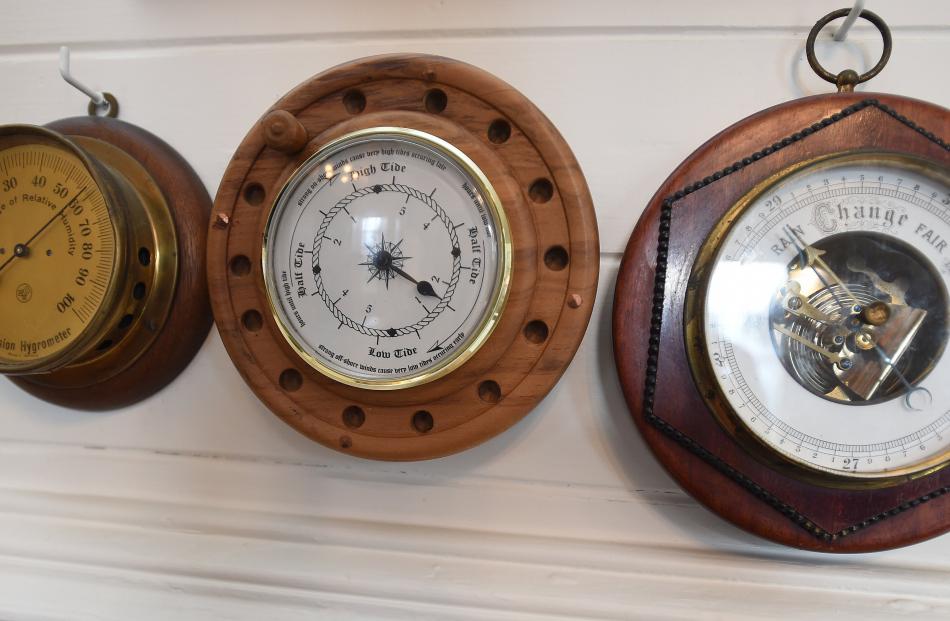 A brass hygrometer and a barometer flank a tide clock in the shape of a fly fishing reel that Mrs Barta made for her husband. 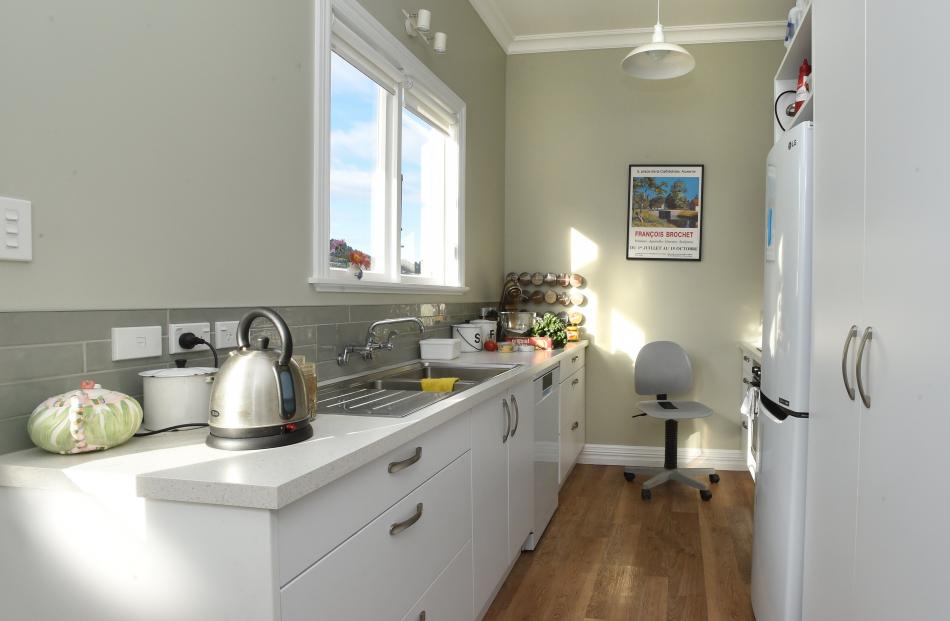 The owners installed a new kitchen. Previously the court house had only a small scullery.

A Palmerston couple have taken the law into their own hands. Kim Dungey reports.

Maria Barta and Jim Hinkley are used to fielding unusual inquiries at their Palmerston home.

On one occasion, a man walked through the open front door into their living area and asked where the town's public toilets were.

Not long after that, a young foreign couple "cautiously poked their noses through the door" and asked if it was where they registered their cat and dog, Mrs Barta says.

The confusion is understandable. Until the 1970s, the building was the town's courthouse and there is still a sign to that effect above the front door.

For the past 18 months, however, it has been home to the former teacher and graphic designer, who are both involved in all manner of local organisations from the anglers' club to the A&P Association.

Maria Barta and Jim Hinkley have transformed the former Palmerston courthouse into a comfortable home. Photos: Gregor Richardson
The pair have always loved old properties and were living in a historic mill manager's house at Inch Valley when they decided to move to something smaller.

By sheer coincidence, they approached the courthouse's owner the very weekend she had decided to sell. 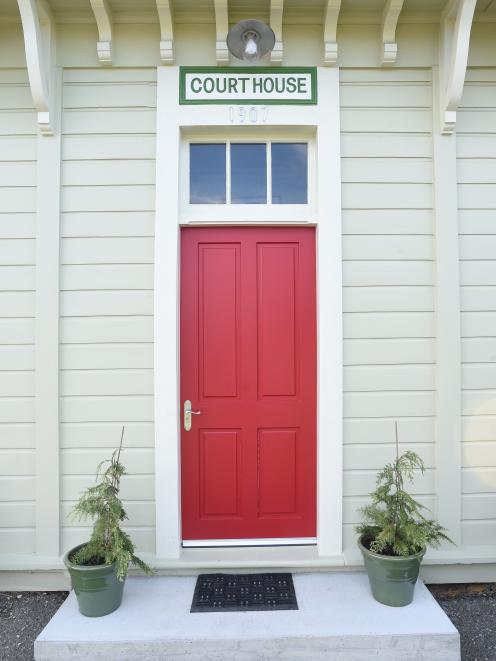 The original courthouse sign hangs above a rugby red front door. The 1907 building was originally the Waikouaiti courthouse and was moved to Palmerston in 1935.
Mrs Barta had rented the building for her retail business in the late 1980s and early 1990s.

"We liked the volume of the space, the fact the building was historic and the fact we could preserve it for another 50 years," she says, adding that they "naively" thought they would shift in within three months.

In fact, it took five months to renovate the building and during that period, they had to move seven times.

Finding that the entire south wall of the courthouse was rotten and had to be replaced "blew the budget", Mrs Barta says.

However, one discovery was more positive. They liked the pale grey that the spacious court room had already been painted as it provided an excellent backdrop for their paintings and photographs.

The previous owner, who used the courthouse as a weekend getaway, had put on a new roof and added a deck at the rear.

The only change the new owners made to the shell of the building was to add a window in the east wall to allow the morning sun to pour in.

The hallway and office areas alongside the courtroom became two bedrooms, a new bathroom and a galley kitchen; previously the building had only a "tiny" scullery. 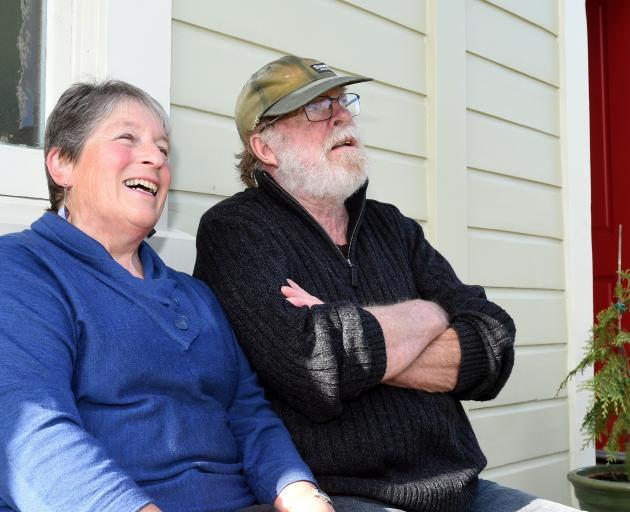 Maria Barta and Jim Hinkley.
"Our builder, Jeff Dennison, had a lovely saying: `It'll be mint, Maria, mint'. And my saying was, `Well, it is what it is', meaning it's an old place and we know that it's well and truly off plumb."

Right from the start, the couple were determined not to partition the courtroom, which is 5m by 9m and has a stud that is almost 6m high. The timber-lined space is now an open-plan living-dining area with a study at one end.

Lines in the ceiling and walls show where the building was sliced in half to be transported to the site.

The 1907 building was originally the Waikouaiti courthouse but was relocated to Palmerston in 1935.

The courtroom's 5.6m-high ceiling makes the open-plan living area feel spacious. Photo: Maria Barta
Before this, Palmerston court sittings were held in the former Presbyterian Church in Gilligan St, says Mrs Barta who used Papers Past and Road to the Rushes, written by the late Eileen Foote, to research the building's history.

Even when the courthouse opened on its original site in court St, Waikouaiti, officials envisaged a time when that town would not need it. The number of civil and criminal cases heard in the previous courthouse had dropped from 334 in 1863 to 42 in 1906. Fines in the same period had fallen from £1028 to £216 and less than half the money was recovered. 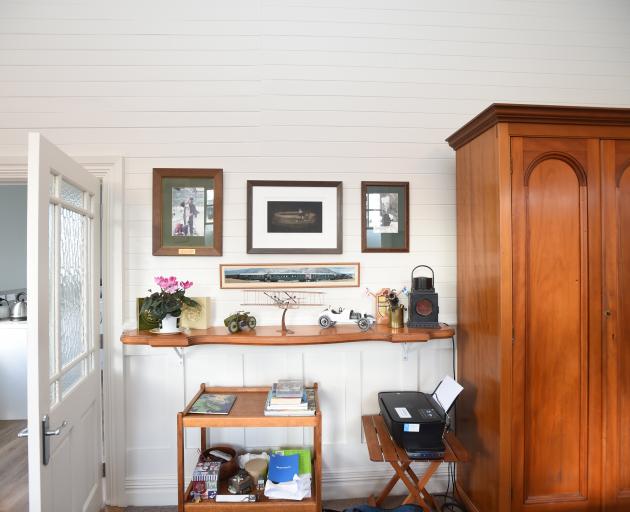 The kauri shelf belonged to Mrs Barta's parents and the cupboard beside it is thought to have once been a linen press in a convent.
Serious cases were transferred to Dunedin, Mrs Barta says. Those heard in the Palmerston Magistrate's Court were "pretty minor".

"Things like a dog making a horse shy, somebody having lice-infested sheep at the saleyards and somebody drunk in charge of a horse ...

"Later on, once vehicles were on the road, people were being had up for driving at 35 or even 45mph [72.5kmh] - `far too fast' to be going through Palmerston."

After court sittings were transferred to the Waihemo County offices, the building was used by a playcentre and then a law firm.

The couple had several large pieces of furniture in their old house which fit the courtroom perfectly. There are also family mementoes and railway memorabilia, including a signalman's light converted to electricity. Both are "very keen on trains" and say one of the great pleasures of living where they do is hearing local train movements. 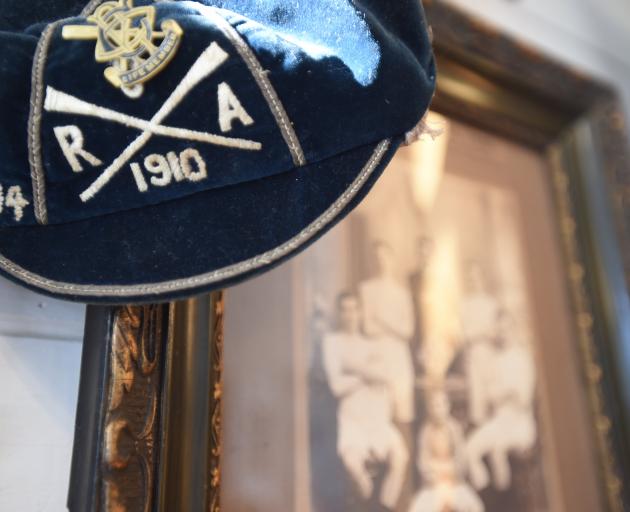 Family mementos include this rowing cap, which belonged to Mr Hinkley's grandfather. Robert Hinkley.
A large kauri bookcase separates the living area from the study. Mrs Barta says it came from the Hillside railway workshops.

"It would have been painted cream and green, government colours, and held the apprentices' manuals."

The garden, which is "quite precipitous and full of convolvulus and couch", is gradually being tamed.

Being in the middle of town has its advantages. Friends often stop by and while there is no walk-in pantry, there is a "walk-to pantry" in the form of the supermarket across the road.

"It's a lovely community to live in and of course we've got a beautiful view out of our window to Puketapu, Palmerston's iconic hill," Mrs Barta says, recalling how they made the most of the outdoors when they first moved in.

"There were some really mild evenings and, just for the novelty of it, we pulled out tables and chairs and sat under the kowhai tree on the Tiverton St grass berm with some friends, drinking wine. I remember thinking, `people go to Tuscany for this and we've got it here'," she says, laughing.

"It's a fantastic place to live in."