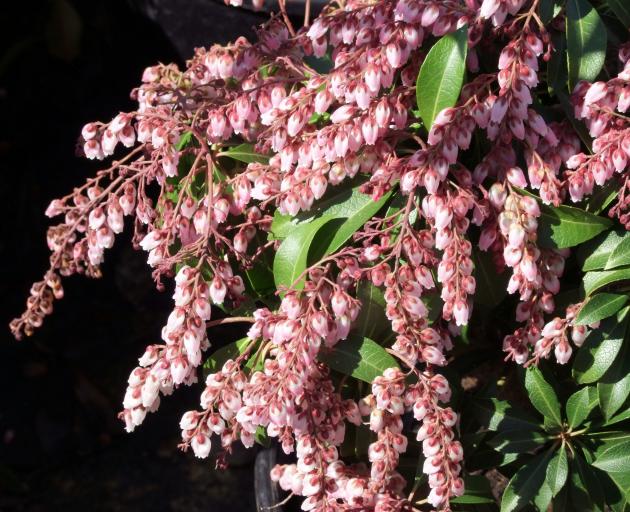 It has taken me years to appreciate Pieris, a group of evergreens often referred to as lily-of-the-valley shrub, Japanese pieris or, in North America, andromeda. 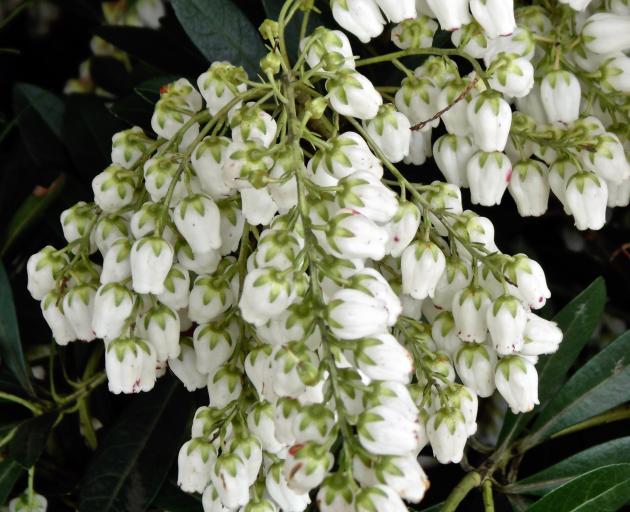 Temple Bells has drooping panicles of cream flowers.
With a bit of imagination, the flowers appear a little bit like lily of the valley (Convallaria majalis) and like the ground-covering perennial, come in white or pink and appear in spring. Pieris perfume is more delicate, though, lacking the intensity of Convallaria.

The seven species are from the Northern Hemisphere and are part of the heath family (Ericaceae), which means Pieris need acid soil to do well. 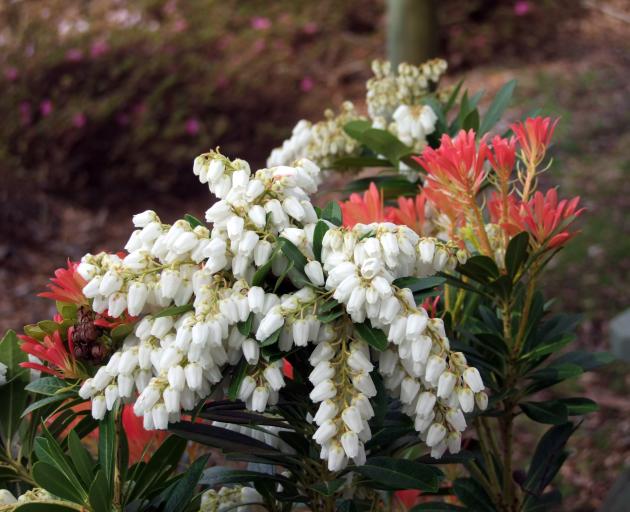 Bright new foliage is a highlight of most Pieris.
The most common species in cultivation is Pieris japonica, native to Japan, Taiwan and eastern China. Most named varieties originate from it, although Wakehurst is a P. formosa cultivar and Forest Flame comes from P. formosa var. forrestii.

What tended to put me off these shrubs was the fiery colour of new foliage, which seemed at odds with the flowers, especially the pink varieties.

I can’t use that argument any longer, as I’ve learned that some varieties have less intensely coloured fresh growth. Notable are Sarabande, Pink Delight, Purity and Temple Bells, whose young bronze foliage turns green as leaves age. In some, depending where they are grown, the bronze tones may be absent. 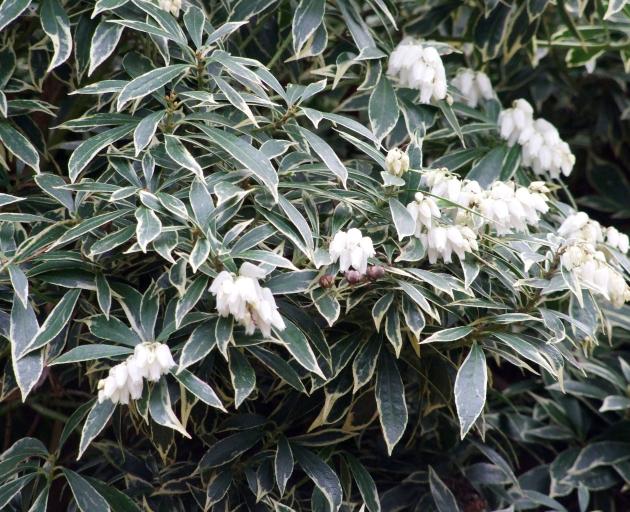 Pieris japonica Variegata.
To me, Variegata is a top choice because the white edges to the dark green leaves are tinged pink as they emerge, contrasting prettily with the white flowers. Flaming Silver has similar variegated leaves but new foliage is red.

Cultivated varieties have a much greater range of heights. Among the shorties are Sarabande (90cm), Christmas Cheer, Temple Bells, Summer Wine, Dorothy Wyckoff and variegated Little Heath (1m), while intermediate varieties include Pink Delight (1.5m) and Valley Valentine (1.5m). Most of these spread almost as far as their height. 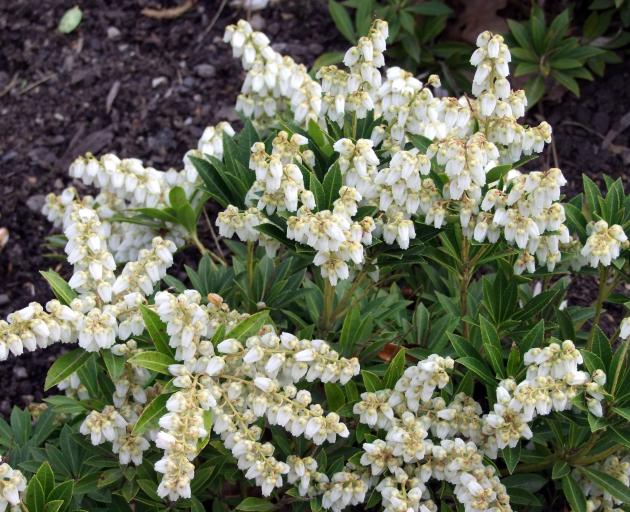 Pieris are generally slow growing, so — unless you can track down an expensive, large-grade plant — they are not a quick fix where something tall is needed in a hurry. Scarlet O’Hara is sometimes recommended for tall hedging, somewhat surprising, given its rather sluggish growth, so it definitely wouldn’t be my choice.

Although they flower in spring, Pieris buds start forming long before then, sitting over winter in much the same way as those of rhododendrons and magnolias. Because some varieties, such as Dorothy Wyckoff, have deep pink buds in winter, Pieris can give a touch of colour when nothing much else is around. 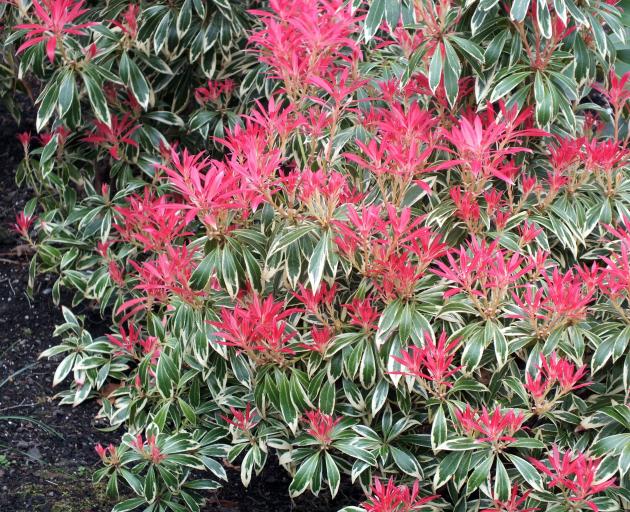 Pieris japonica Flaming Silver. The new red leaves will become two-toned as they age.
Having loosely similar origins as rhododendrons, Pieris do best in a shady spot that remains damp year-round but not waterlogged or root rot will kill them. The soil must be acid, with a pH of 5-6, meaning they aren’t lovers of lime. If your soil is depleted, add compost before planting.

Neglected bushes can be pruned hard, chopping back by at least a third to reshape and rejuvenate them and giving them a feed of compost to cheer them up. They are unlikely to flower the next season, but the bright new growth should be adequate compensation.

Overall, these are easy-care shrubs, needing little attention apart from an annual trim after flowering to keep the bushes tidy. Why did I shun them for so long? 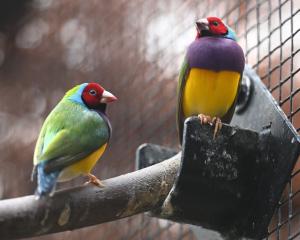 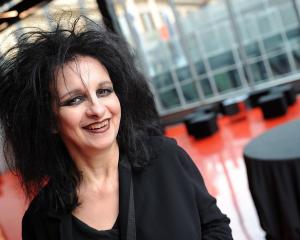 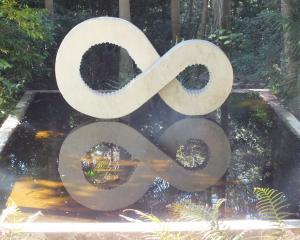