High life rests on a solid base 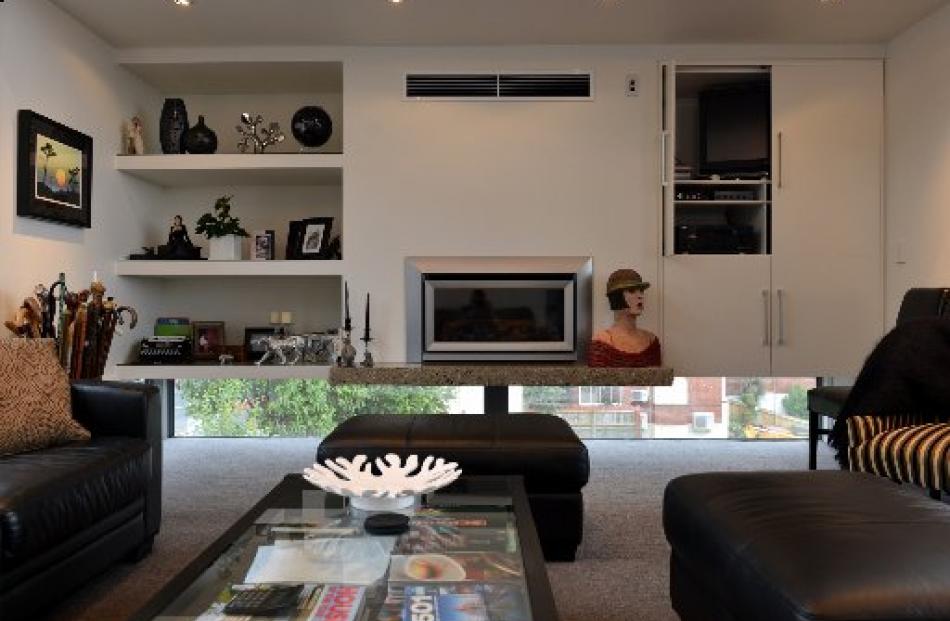 One end of the living area stretches out over the driveway. 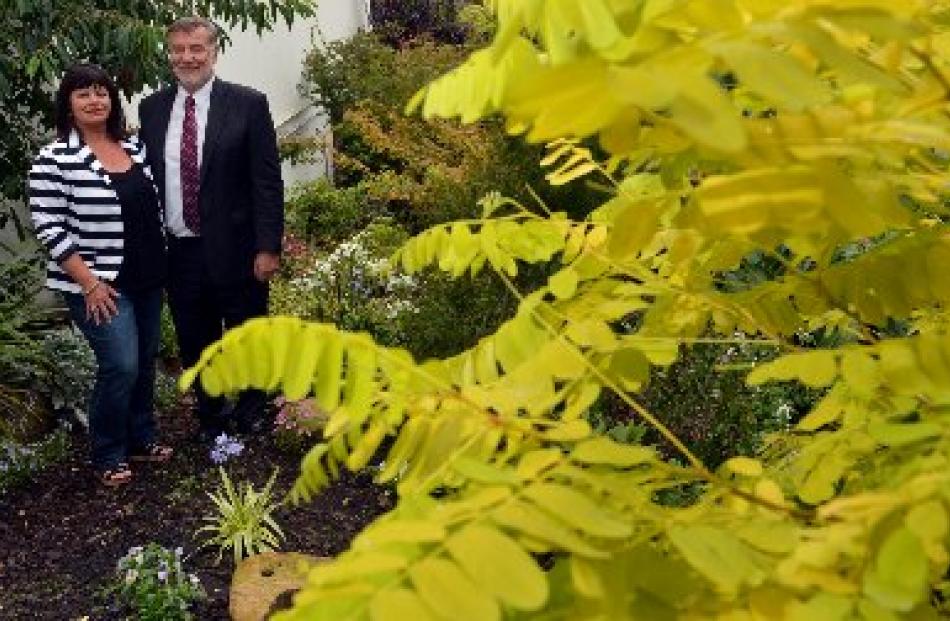 Roger Fewtrell, along with wife Derryn, is often away on business but loves returning to Dunedin: ''It's a nice peaceful place to live and full of nice people''. 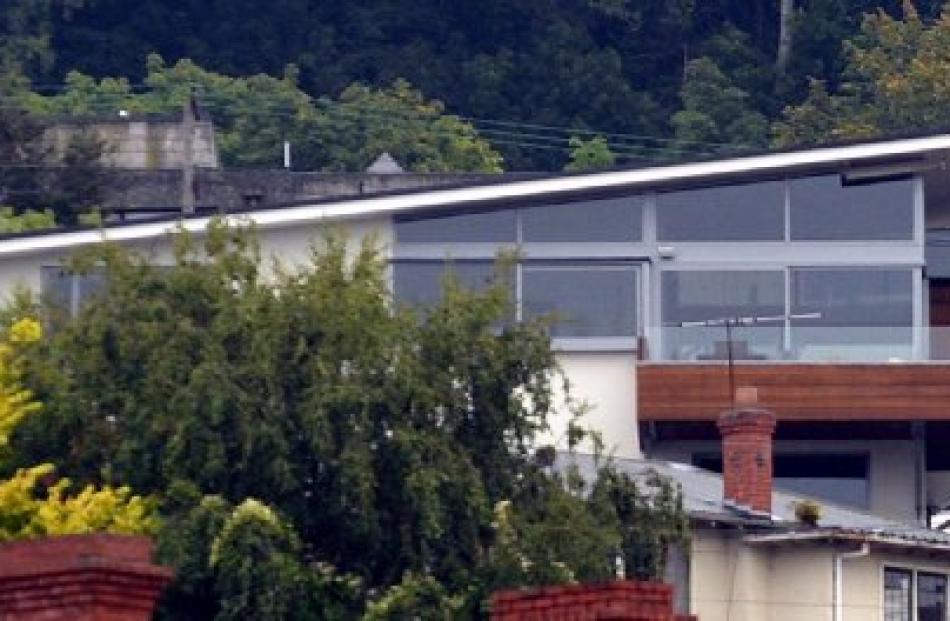 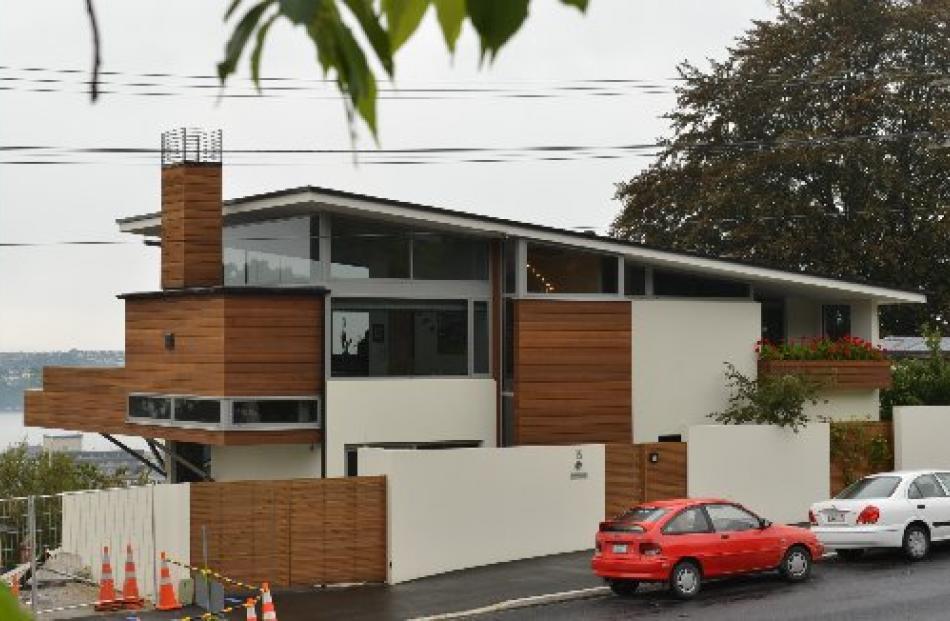 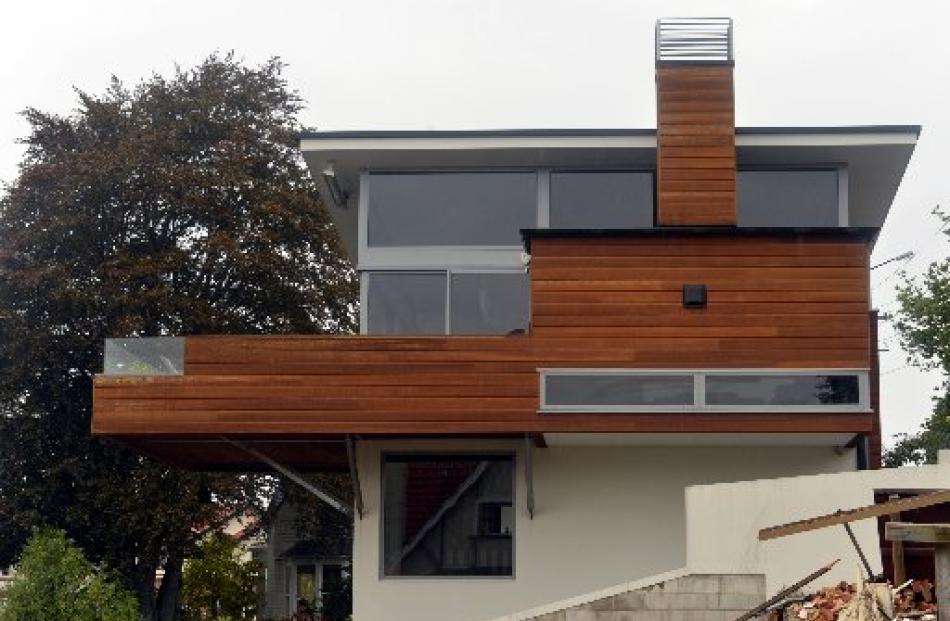 The rear of the house. 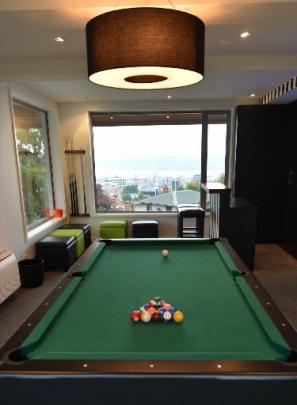 Pool table in the games room. 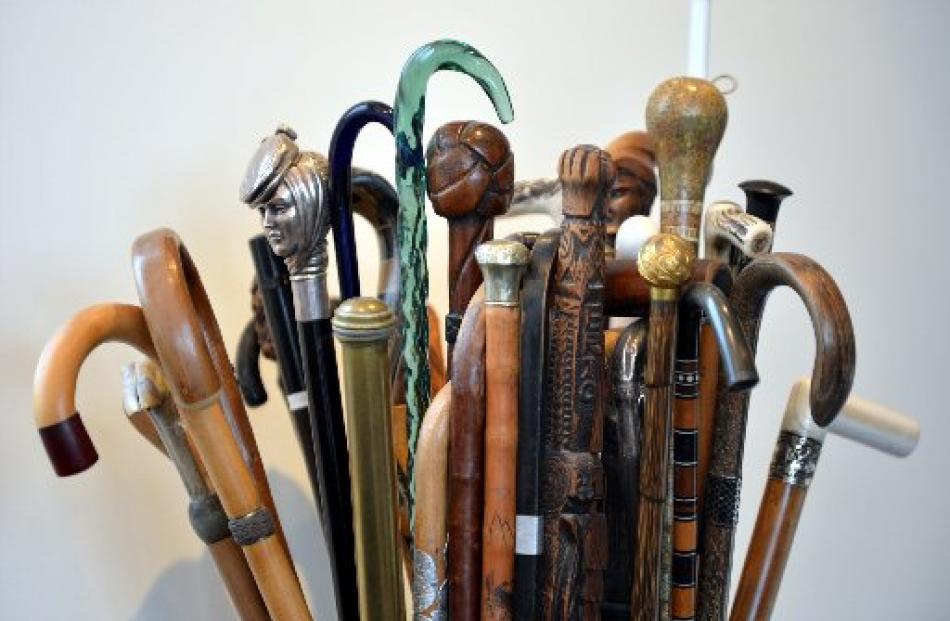 Roger Fewtrell was 13 when he bought a walking stick shaped like a crocodile with half a ''native'' sticking out of its mouth. Now, instead of buying souvenirs overseas, he looks for interesting sticks to add to his collection. 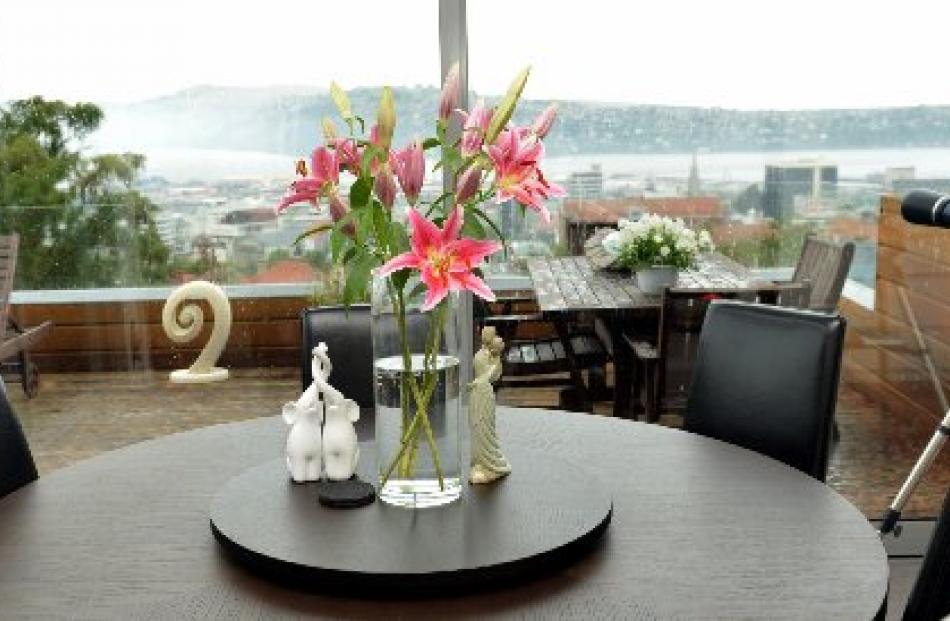 On sunny days the owners slide back the glass doors to form a pillar-less corner in the living-dining area and relax on the deck. 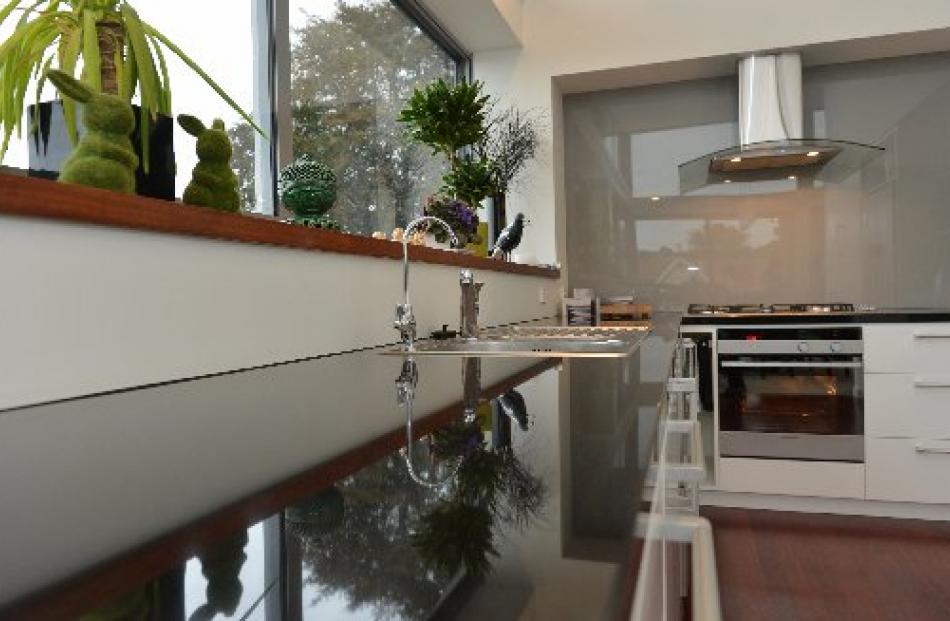 It wasn't for the faint-hearted but a Dunedin couple have reaped the rewards from building on a steep inner-city section, Kim Dungey reports.

The earthworks took five months and added the cost of an average-sized house to their spend.

But the Dunedin couple say it was all worthwhile given the result - a three-level home with sweeping views of the city and the historic buildings that are its neighbours.

''The builders pulled down the garages that were on the site and that was our first variation for $18,000. The engineer thought it was solid clay [underneath] but it was just fill that had been pushed off Arthur St.''

As heavy machinery rolled on to the section and the dirt moved, so did the Arthur St footpath.

Workers discovered large amounts of fill had been dumped on the site - probably when the road was built - and there was a gully or creek bed through the middle.

Builder Graham Stevenson says they needed to drive piles more than 7m into the ground before reaching solid clay, pour about 100cu m of concrete under the basement slab and build two retaining walls - one to hold up the Arthur St embankment and the other to hold up the driveway.

Before moving in a little more than two years ago, the Fewtrells lived in an apartment building along the road.

The property was too small for them and had no outdoor space but they liked the area so began looking for a house they could demolish to free up a building site.

As luck would have it, the owner of a Cargill St property was willing to sell them the back part, which bordered Arthur St and had five Fibrolite garages used for storing building materials.

The couple knew they had to build up to gain views and, because they are often out of town, wanted the top level to function as a self-contained one-bedroom apartment.

Mr Fewtrell is managing director of Southern Hospitality Ltd, which supplies the hospitality market with everything from kitchen equipment to furniture.

The business he helped found 25 years ago has 17 branches in New Zealand and Australia, four stainless steel plants and a joinery factory.

Last year, the Fewtrells were home for only 13 weeks, as they opened branches in Sydney, Manukau and Wellington.

In the firm's early days, Mr Fewtrell designed commercial kitchens and bars so by the time they approached architect Hamish Wixon, he had prepared detailed floorplans and specifications.

Outdoor space was also in the brief, so a garden of maples, cherry trees, rhododendrons and ground covers was planted below the house and outdoor living space created off the front and back.

A large deck cantilevered off one end of the 300sq m home looks down Stuart St and across to Forsyth Barr Stadium, providing what Mr Wixon says must be one of the best views in Dunedin.

At the other end, a recessed balcony off the main bedroom captures the west sun and offers lovely views of Otago Boys' High School and the town belt.

The Fewtrells say the school - completed in 1885 and regarded as one of the finest neo-Gothic buildings in the country - often attracts tourists during the day but also looks impressive when lit up at night.

Visitors have included a couple of French architects, who told them that in their country, a modern home would not be allowed in an area of heritage buildings.

Mr Wixon says that is true in many parts of France but Dunedin is full of houses from different periods:

''Even within that area there are villas, there are bungalows, there's some new buildings, there's colonial and Georgian further down the road. It's a conglomeration of different styles but it's quite a cohesive street environment.''

Design elements were carefully thought through so the new house would add something to the street, he adds.

''It was a combination of trying to get some sort of urban design and glazing along Arthur St but also to retain some privacy.''

The basement garage and adjoining turning space satisfied a council requirement that vehicles do not reverse on to Arthur St. It avoided the need for a double-garage door facing Arthur St and allowed for a ''better street frontage''.

The home's entrance is on the middle level, which also includes a games room, two spare bedrooms, a bathroom and a laundry. Above this is the kitchen, living area, master bedroom and ensuite.

To gain more space on the top floor and to add visual interest at the street, Mr Wixon cantilevered part of the living area out over the driveway. A fireplace is located on the end wall, with the glass below providing interesting light inside.

Furnishings are neutral. Light-coloured Tasmanian oak was used in the stairwell and Resene rice cake, an off-white the Fewtrells say is easy to live with, almost everywhere else. The only exception is the games room, which has one wall papered in black and white vertical stripes.

In the living area, mementoes of their travels are displayed alongside some of the 100 or so walking sticks Mr Fewtrell began collecting as a boy growing up in Sydney.

Clever design features include a glass sliding door at the top of the stairs, which allows the couple to heat only the top floor and which is soft-closing so it can't be accidentally slammed and broken.

Retractable doors allow unobstructed access to the kitchen pantry and hide the television when it is not in use.

Future needs have been considered. The lift will allow them to remain in the house when they are older but is also useful now when they arrive home with groceries or suitcases.

The games room could be divided in two by subsequent owners to create more bedrooms.

Difficulties early on in the project have not deterred the couple, who are now building two houses next door and planning to sell them.

''It was just one of those things. When you buy a piece of land, you don't really know what's under the dirt,'' Mr Fewtrell said, adding the house was like a bunker and was not going to move.

''They reckon we're holding Otago Boys' up,'' he adds, with a laugh.