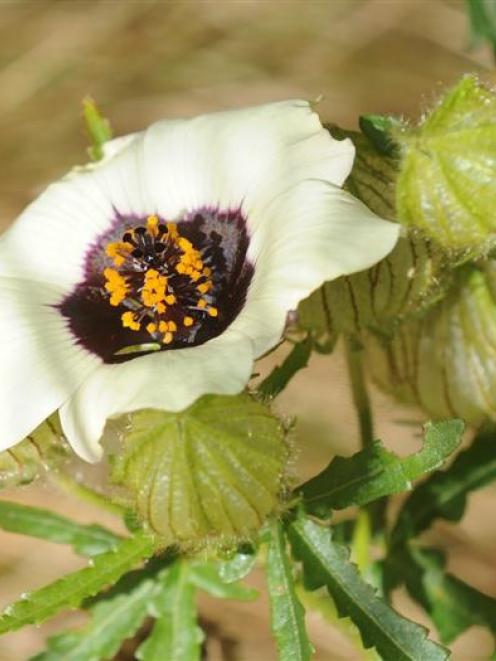 'Hibiscus trionum'. Photo by Peter McIntosh.
When hibiscus is mentioned, the picture in one's mind tends to be of a warm tropical setting.

While the majority of the malvaceae (mallow) family, to which hibiscus belongs, come from the tropics, there are also representatives in southern latitudes.

Here in New Zealand there is a hibiscus species which now appears to be of questionable origin. Hibiscus trionum, once considered to be indigenous, has since been described as naturalised. Needless to say, this has caused me confusion.

Occurring throughout the world, this species is highly variable. A recent study of chromosome numbers of New Zealand, Australian and African plants has shown that we do have one, shared with Australia, that is distinct from the more common forms.

Further research is something we will leave to the scientists and in the interim I will continue to treat our specimen as a non-indigenous and fully naturalised native.

Cutting plants hard back in spring will sometimes incite them into new growth. Failing this, there is usually germinating seed to continue the display over the next season.


> Hibiscus trionum is growing in the Native Conifer border, opposite the North American border, in the upper Botanic Garden.

> Common names include bladder hibiscus and flower of an hour.

> The species is thought to have originated in Central Africa.


•Shirley Stuart is curator of the native plant collection at Dunedin Botanic Garden.