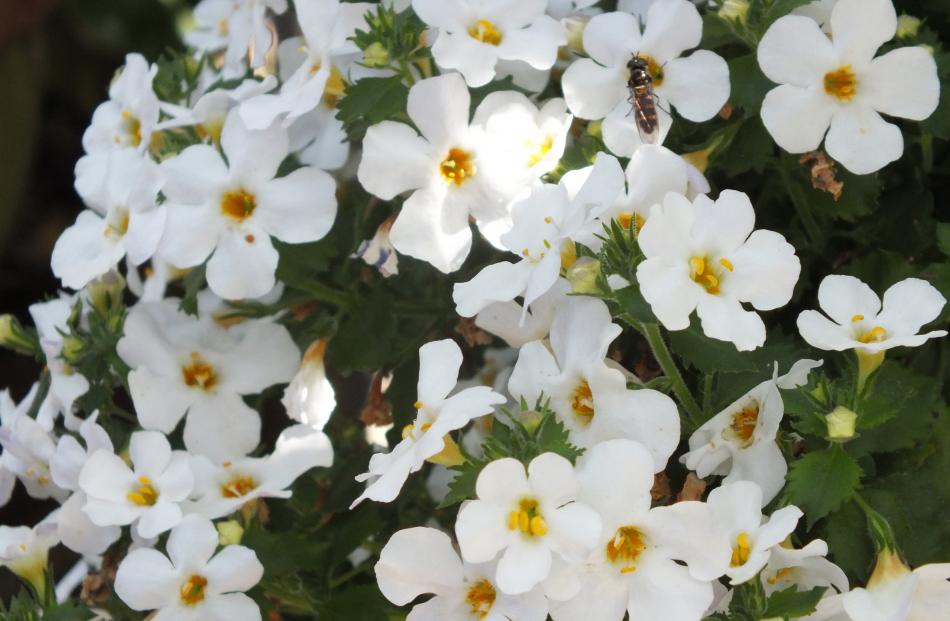 Carolyn likes white highlights, such as this Bacopa. 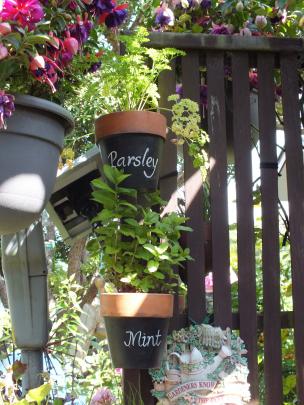 Potted herbs hang on the pergola. 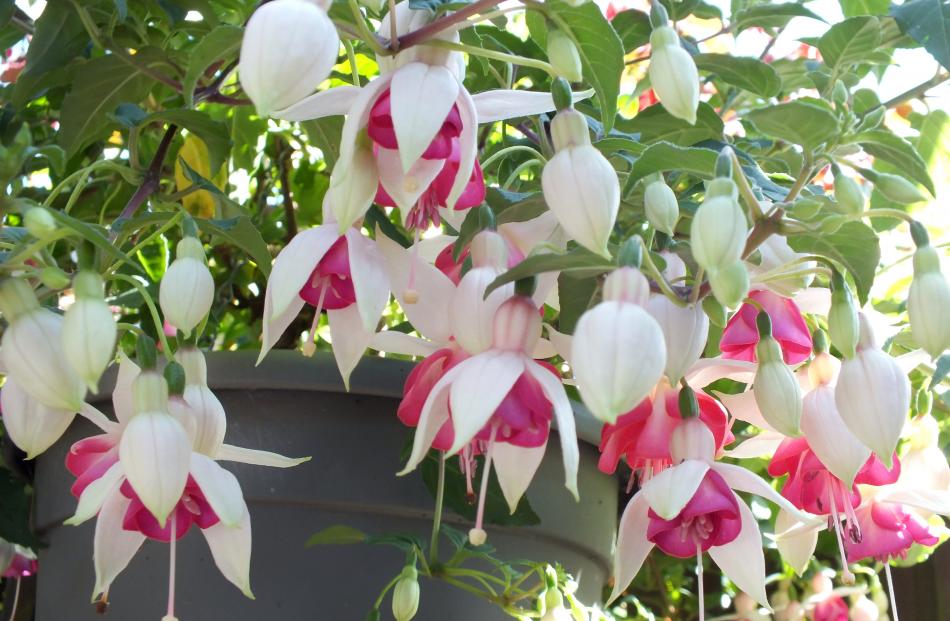 There are now more fuchsias than roses in the garden. 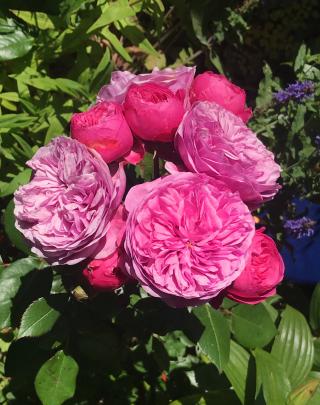 Lucy's Rose was a fundraiser for Ranui House, which supports families of people in hospital. 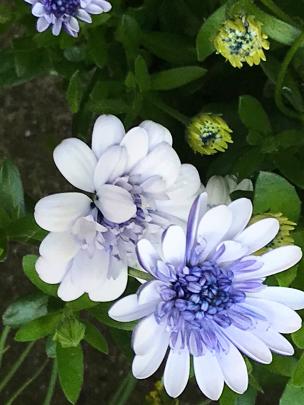 Gillian Vine gets the lowdown on downsizing from a Dunedin couple.

In his early 50s, Alan Eagle had some health issues and found his Mosgiel garden less easy to manage.

"It was getting to be a chore, it really was," he says.

So 10 years ago, Alan and his wife Carolyn decided to downsize both the house and garden in one hit, rather than going a bit smaller then and having to repeat the exercise a few years later.

They felt they were lucky to find a Dunedin property with a small section. 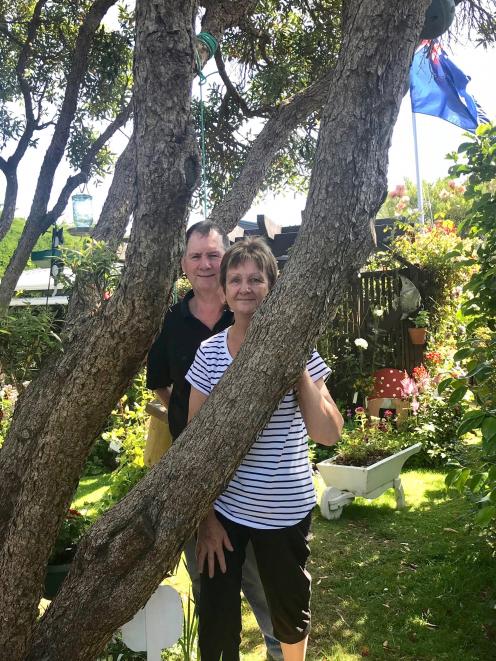 Alan and Carolyn Eagle in their Dunedin garden, which is dominated by a massive southern rata.
Their new house in Belleknowes had been built for an elderly couple and was ideal for them, Carolyn said, but — as anyone who has ever done so will attest — downsizing was not easy.

"It was sad to leave Mosgiel," Carolyn said.

Apart from a huge southern rata, some natives as fillers and a big camellia, the garden was empty.

"We took it all out except the rata and started fresh," Alan said, adding that there was no formal plan, as everything had to work around the rata.

"Every second year, it flowers really well and the tui love it."

Carolyn recalled bringing several trailer loads of plants from Mosgiel, which had to sit for some time.

"We moved in May and then had the coldest June in history — and had no heating in the house," she said.

"Because we both work at The Warehouse, where Alan is garden manager, half a dozen plants came home every day," Carolyn said.

"We walk around the garden with a plant and decide where to put it.

"I love white in the garden, but Alan doesn’t, so most of what we buy is pink."

A garden was added around the existing patio and they had a pergola built, just to hang fuchsias on.

That first winter, all the fuchsias appeared to die, so they threw them out, only to be told later that most would have regrown when the weather warmed up.

They called their new home Rose Cottage but there are now more fuchsias than roses. 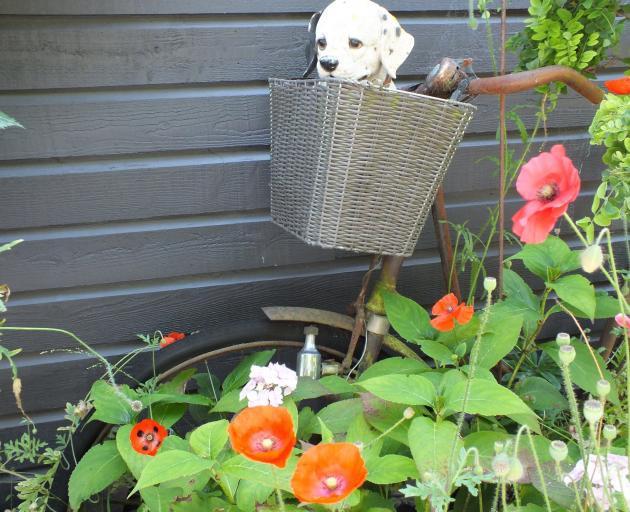 Carolyn's father's bicycle in retirement at Olde Rose Cottage. Photos: Gillian Vine
Some of the roses came to a very sad end when Alan picked up the wrong spray and coated them with poison.

Among those they now grow are hardy Scotch roses, the striking Rosa persica hybrid Eyes for You, Arrowtown to disguise on old alstroemeria that refuses all efforts to get rid of it, and Lucy’s Rose, a fundraiser for Ranui House run by the Lions Club of Maniototo, and named for the granddaughter of Jane Falconer, whose idea it was to use a rose in this way to support families of those in hospital.

The Eagles still have some of the sculptures and structures that adorned their former garden, including the bicycle Carolyn’s father used to ride to work in Mosgiel. A wagon has gone, though, as it simply did not fit.

Every space has been utilised, including fences, displaying pots of geraniums, another favourite of Carolyn’s, while tomatoes and strawberries flourish in tubs.

They love their garden, even on windy days which sometimes plague them in early summer, and are happy Alan’s health tipped them into making the move when they did.

"It was a blessing in disguise," he says.