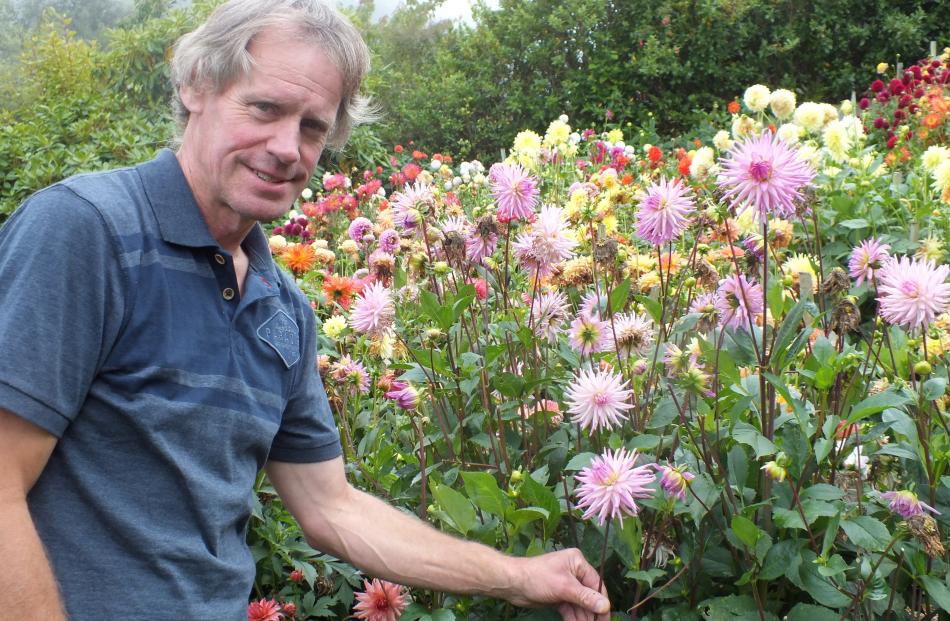 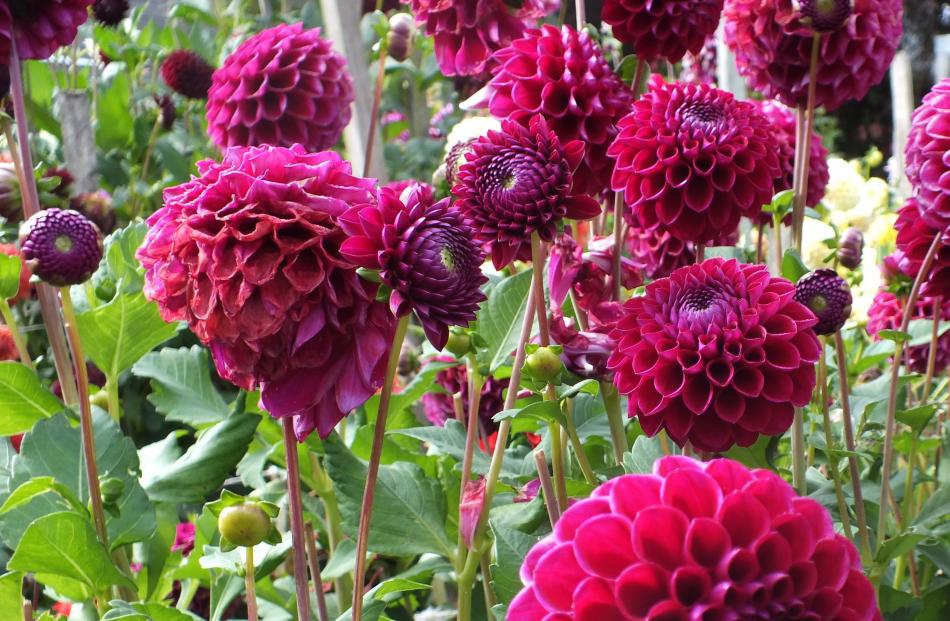 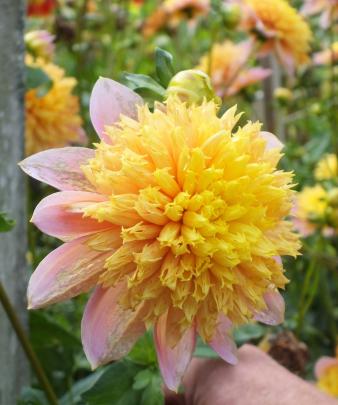 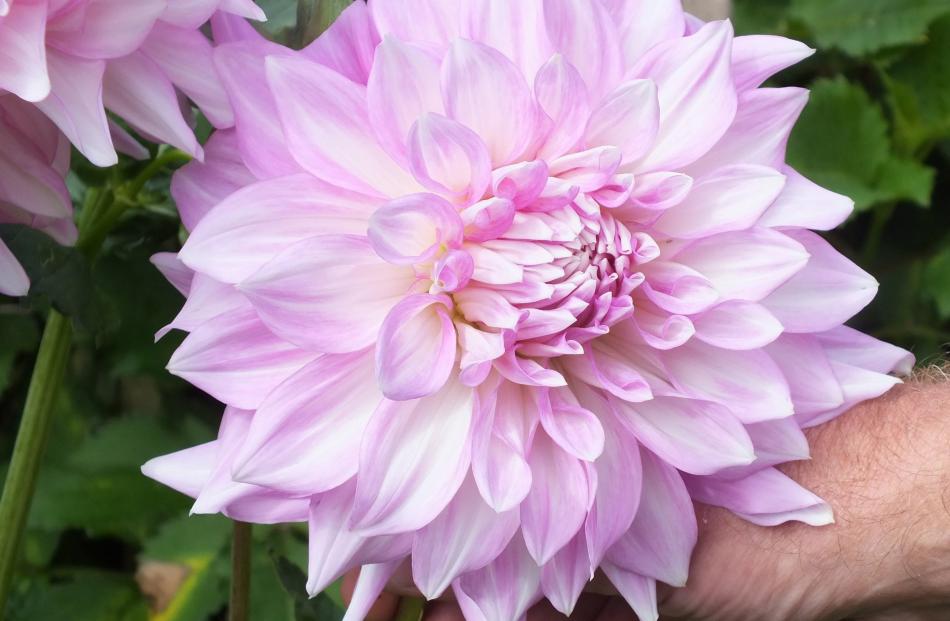 Almand’s Climax is a giant decorative variety popular with exhibitors. 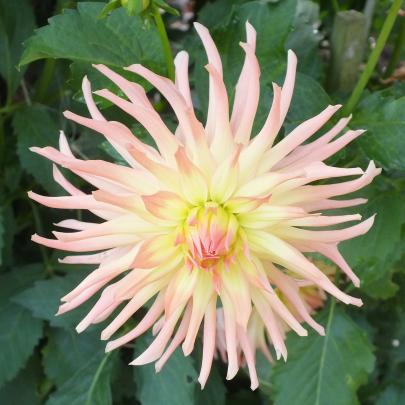 Cactus dahlia Camano Sitka is a delicate blend of peach and lemon. 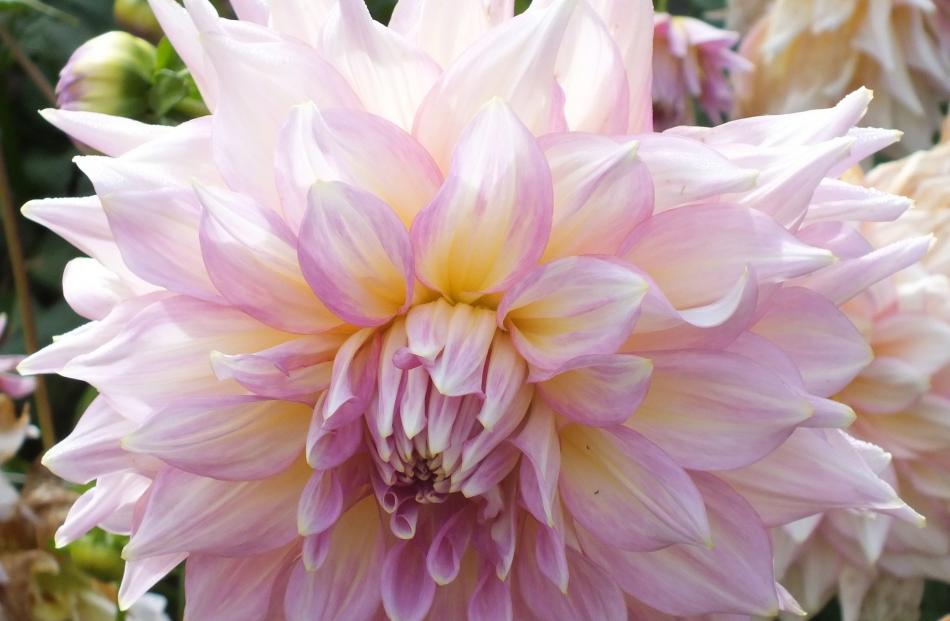 Kidds Climax was bred in New Zealand in the 1940s.

Gillian Vine meets a dahlia enthusiast who has won awards for his photos as well as flowers.

One of the winners in The Wash’s garden contest this year was a photo entered by Mark Penty, of Dunedin.

His choice of flower reflected his passion for dahlias, plants he says have been underrated but are now making an overdue comeback.

"In any summer flower show, the dahlias stand out," he says.

About 15 years ago, Mark and his wife Zita saw dahlias featured in Maggie’s Garden Show and he was hooked.

In his Fairfield garden, reshaped to accommodate dahlias, he now has hundreds of plants of almost 300 varieties, encompassing almost all the dahlia types, among them giant decoratives such as New Zealand-bred Kidd’s Climax  whose blooms can be 30cm across, spiky-looking Camano Sitka, anemone-centred Goldie Gull, near-black Macop-B, cute orange-and-yellow collerette Pooh and the perfect spheres  of Amy Cave.

A decade ago, he was persuaded to enter the Dunedin Dahlia Circle’s show and had instant success.

"I entered 13 flowers and ended up with seven prizes," he says adding that, unlike some exhibitors, he doesn’t cover his flowers, "I just take them from the garden."

Each year, he exhibits at shows around Otago and has had consistent success, particularly with small varieties and giant decoratives. Next summer, he hopes to have some different dahlias to show, as he is planning a big order of about 40 new varieties.

For those ordering new dahlias, he recommends holding fire on planting until the ground is warm enough.

"Some North Island nurseries send out tubers in winter. If this happens, it’s important not to put them into the garden then but wait until October or November. Meantime, store them in moist, not wet,  sawdust."

Later this month, Mark expects to be busy lifting his tubers to store for the winter.

"But it’s important the tops die completely and if they’re still green, I don’t lift them until later," he says.

He will cut off the tops and store the tubers in banana boxes of damp, non-tanalised sawdust that he ensures stays moist over winter.

Not everyone lifts their dahlias — "A lot of people have success leaving them in the ground" — but Mark believes that overall they do better if taken out annually, producing more blooms of a larger size.

The other advantages of lifting are protection from frosts in colder areas and being able to trim off any rotted pieces, then splitting and cleaning the tubers before replanting.

"I like to feed them with Nitrophoska and a bit of well-rotted horse manure," Mark says.

The main pests are earwigs and he keeps them at bay by spraying twice a season.

Mark is delighted that dahlias seem to be returning to favour as gardeners are rediscovering their attributes.

"With such varied colour and sizes, I don’t know why more people don’t grow them," he says.