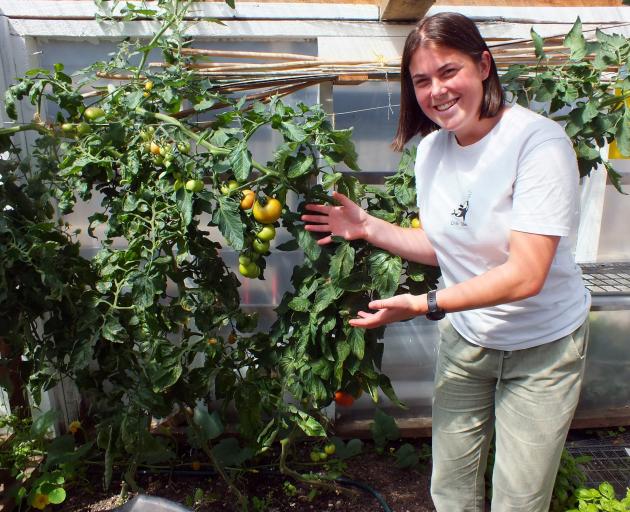 Nutrition student Tessa Honeybone shows off some of the tomatoes in the greenhouse. PHOTOS: GILLIAN VINE
Gillian Vine goes behind a fence and finds a productive garden in Dunedin’s student quarter.

Britons were urged to dig up their lawns to grow vegetables, which they duly did. Unfortunately, most reinstated their lawns after peace was declared, using vast amounts of labour and chemicals to get the desired carpet-like effect. 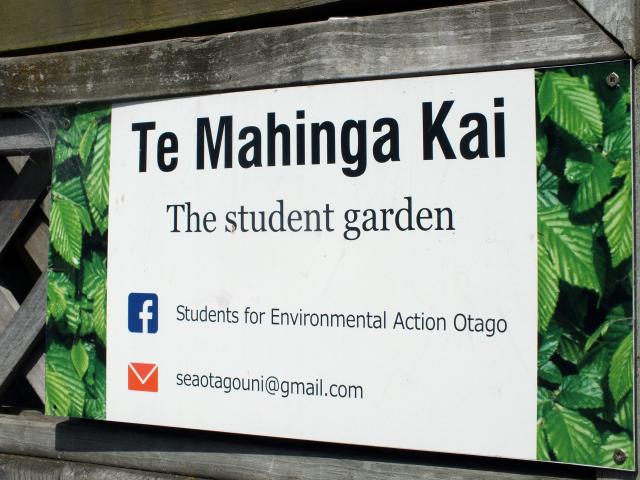 With the wastefulness of lawns in mind, it was a pleasure to discover recently that a lawn in North Dunedin had been turned into a vegetable garden, Te Mahinga Kai. As the Otago Polytechnic’s student garden in Forth St had been flattened to make way for a new building, the garden is particularly welcome.

It is not far from the place where, in the early days of European settlement, a gardener grew cabbages that weighed 25kg each, so the portents were encouraging.

Te Mahinga Kai is now 18 months old and it replaces a bare lawn alongside Studholme College. The college offered the ground to Students for Environmental Action (Sea) in July 2020 and by December that year, the first crops were being harvested.

Doing things as cheaply as possible was important, so free salvaged material — including sleepers from the Polytechnic garden, sheds, wood, bricks sourced on Freecycle and a barbecue table — was used to keep costs down.

“It cost less than $2000 to set it up,” outgoing garden co-ordinator Danielle Lomas says with justifiable pride. 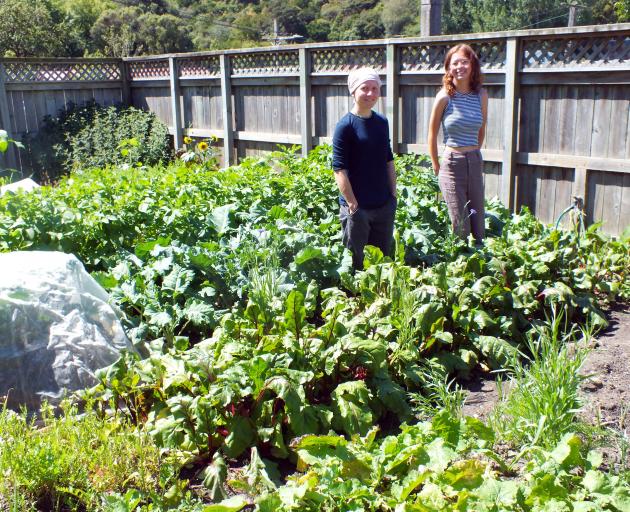 Garden co-ordinator Danielle Lomas (left) and third-year student Eva Templeton in Te Mahinga Kai.
Sea obtained grants, one from OUSA, to buy topsoil and seed, while compost bins ensure there is an ongoing supply of nutrients for the beds.

There is a large bin for things like convolvulus and old man’s beard, which rot down in water and are no-nos for the compost until they are completely dead.

Students are “really getting into composting”, Danielle says.

“But a lot still chuck it in the bin,” nutrition student Tessa Honeyfield says.

A big supporter of composting, Tessa regularly brings scraps from her flat to the garden. She also encourages her flatmates not only to save compostables — “I’ve made sure they do that” — but to waste less, saying it is cheaper than throwing food away and is better for the planet, too.

She loves spending time in the garden and “connecting with like-minded people”.

A third-year student studying politics and geography, she has been involved in the garden since last year.

“Zucchini and broccoli are my favourites,” Eva says of the produce in the garden.

Danielle juggles postgraduate studies with gardening work (she is the gardener at Otago Museum’s tropical butterfly attraction), so is ideally qualified to guide the project. 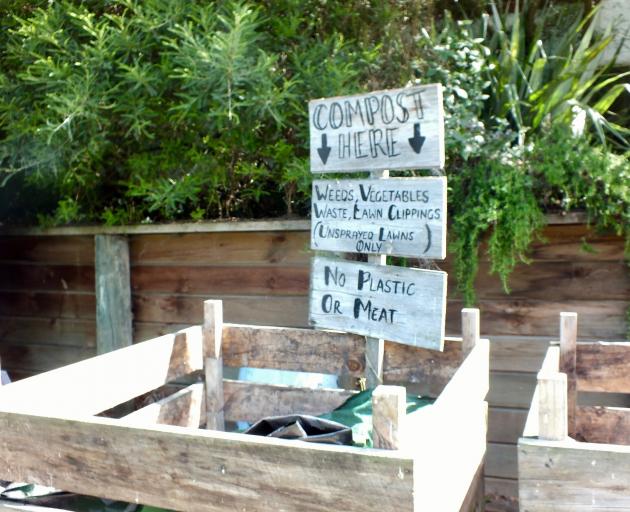 Signs give a guide to what can be composted.
That has meant choosing the best vegetables to grow.

Because Te Mahinga Kai was created on a lawn, then soil added on top, the base of the garden was very compacted. This is now loosening, Danielle says, “so carrots are doing OK this year”.

“We plan to have peak production in autumn and winter, when students are here,” she says.

Kale, purple sprouting broccoli and beetroot are thriving; there are Agria potatoes almost ready to lift; strawberries under netting; and in the greenhouse, a good crop of tomatoes.

Also in the greenhouse are butter beans and a kumi kumi, the latter trained so its rampant growth is outside but its feet stay under cover inside.

Danielle keeps a record of what goes on in the garden.

Last year, there were 31 working bees with a total of 215 hours worked by groups of five or six students, although sometimes as many as 10 — “if it’s super sunny,” Eva quips.

Most students spent one or two hours at the Sunday afternoon working bees, while dropping off compostable material happens throughout the week.

Last year, 36 different herbs and vegetables were grown and 2900 litres of food waste turned into compost to help feed them, which helps the aim of being organic.

Te Mahinga Kai is a credit to all involved and a welcome venture in an area lacking many vegetable-growing opportunities for students.