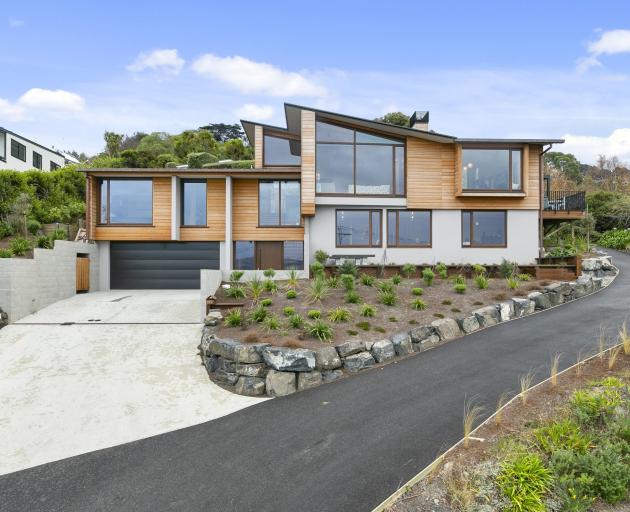 This Dunedin home was designed to capture views of St Clair beach but sit below the view line of an existing property behind. As a result, the house folds into the contours of its elevated section. PHOTOS: EWEN LIVINGSTONE
Wool sacks are not usually found on construction sites, but this build was no ordinary one. Kim Dungey reports. 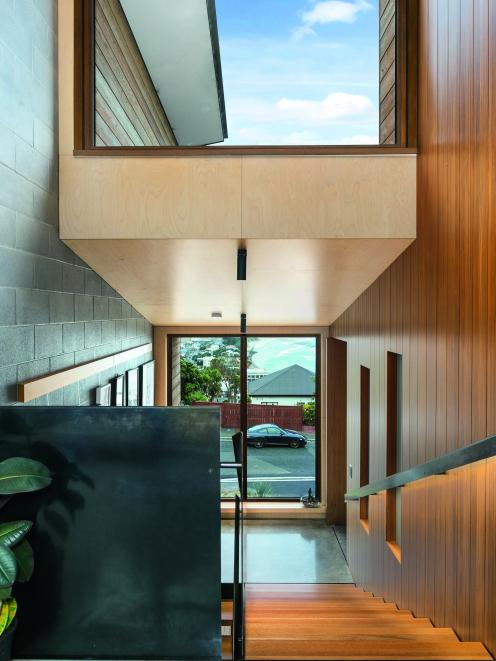 Timber window and door frames provide excellent thermal performance.
The absence of a builders’ skip on site was one indication this Dunedin house was always going to be different.

Committed to a healthy and energy-efficient home, the owners were also serious about sustainability.

Built by W. Hamilton Building, the property won a kitchen award and a gold award in the new homes over $2million category at the southern registered master builders’ house of the year competition. It is also in the national finals, making it one of the top 100 projects across all categories in New Zealand.

For the building company, the contract came with a question that no other client had asked: what did it plan to do about waste management on site?

As a result, it worked with Placemakers to ensure that many materials, including the timber frames, were delivered without plastic packaging.

Instead of having a skip, the builders separated out rubbish such as cardboard, glass and reinforcing steel and removed it in wool sacks to recycling depots. Scrap timber became firewood, fill was used at another building site nearby, and leftover concrete was crushed into gravel. 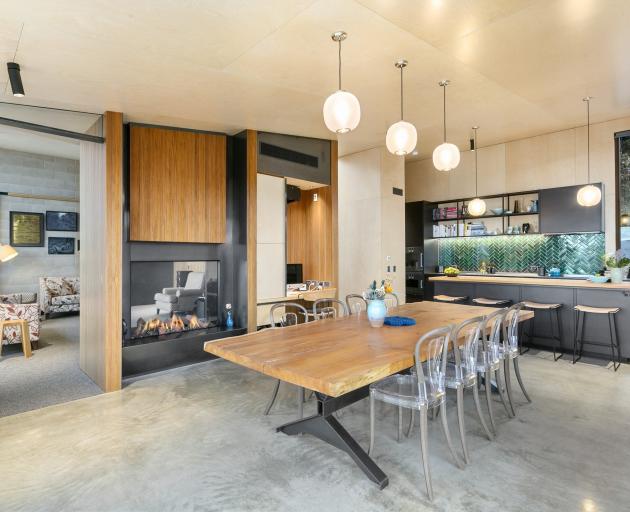 Builder Marty Ross made the dining table from a single piece of American oak salvaged from a church in the United States. The chairs, from Revology in Wanaka, are made from 100% recyclable composite linen fibres and bio-based resin.
They even used boxing to build a compost bin for their food scraps, and the compost was left on site for landscaping.

The project had prompted the firm to think about waste management on other sites and the Dunedin City Council had also begun looking at the issue, builder Bill Hamilton said. 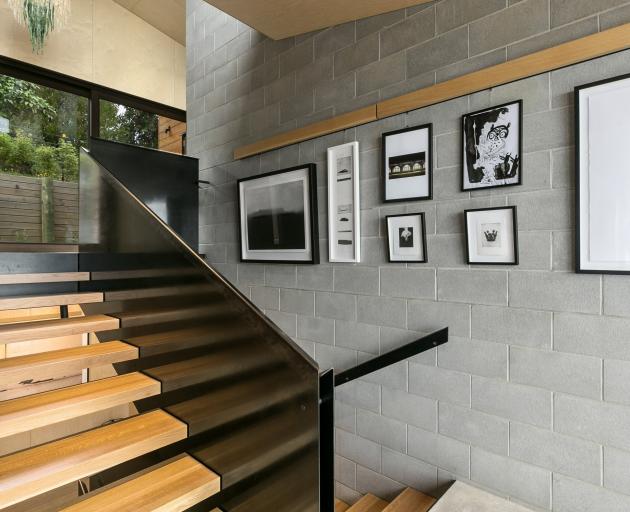 Concrete, metal and wood feature throughout the home. The stairs are American oak.
Registered master builders wanted to recycle more but councils needed to get on board as well because unless there were the facilities to fully deal with materials, they could still end up in landfills.

McCoy and Wixon architect Regan Hall designed the St Clair home to take in the stretch of beach and Pacific Ocean below. However, a covenant meant it also had to sit below the view line of a house in behind (the owners of that property had subdivided the 500sqm section off from their front garden). 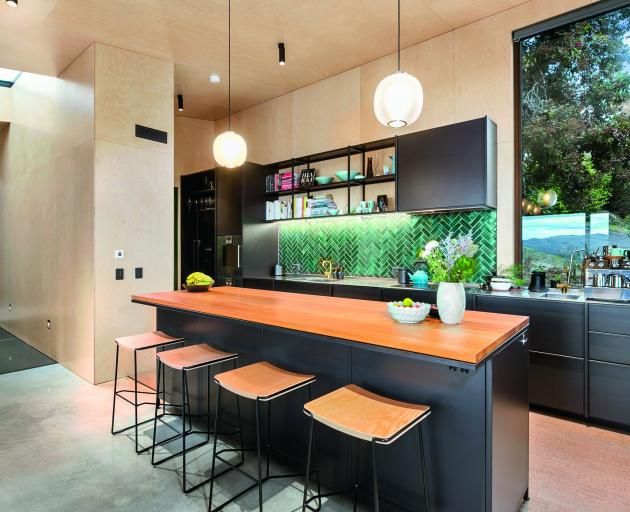 The green herringbone tile splashback makes a statement in the kitchen.
Staying within the height restriction meant the builders had to excavate down more than 7m, remove rock and work around a maze of temporary propping. 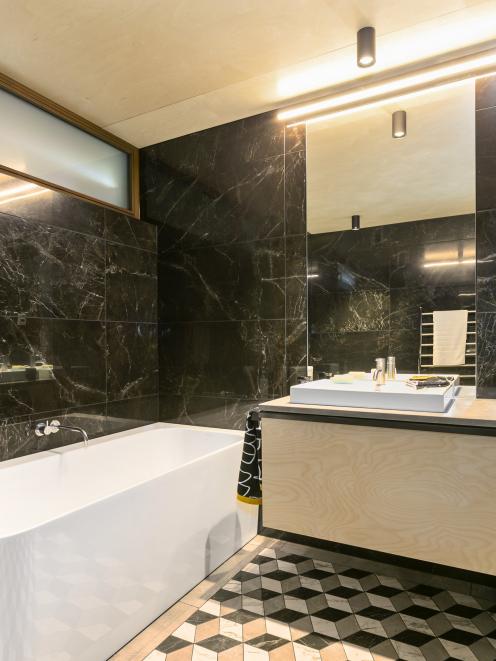 All the tiles, including those in the family bathroom, were made in New Zealand.
In all, there are four levels, with the garage and entranceway at ground level, and the children’s bedrooms and bathroom above.

The second floor is taken up by the master suite and office, and the entire top level is dedicated to family living areas.

These include a comfortable lounge with a see-through, double-sided fire and a striking black steel kitchen. The generous dining area has a window seat overlooking the ocean and access to a northwest-facing deck, one of several outdoor living spaces.

A partial glass floor on the top level allows natural light to pass through the layered home from a large skylight in the roof.

Provision has been made for a lift in the future and energy efficiency is achieved with the airtight construction, heat-recovery ventilation system and timber window frames. Sliding screens on some windows can shut out the sun or add privacy. Concrete floors and walls maximise passive heat absorption and storage. Photovoltaic panels were installed to supply electricity, and solar panels to provide hot water.

A 310sqm home crafted in concrete does not immediately scream "sustainability" and one of the owners acknowledged there were "trade-offs". 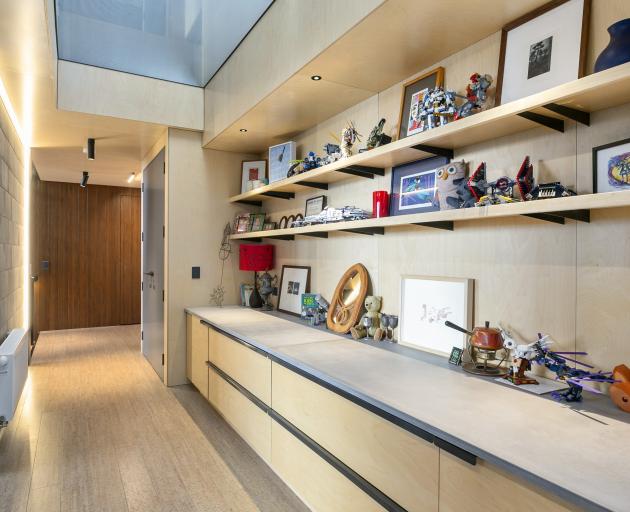 Storage and display space are built into the hall near the children’s bedrooms. The semi-opaque glass ceiling allows natural light to enter from a skylight on the floor above.
The trade-offs included the home’s size, gas fire, concrete and Siberian larch cladding, though the supplier of the concrete was committed to sustainability in manufacture and distribution, the owner said.

Research time was limited because they were working full-time and had three school-aged children but they used as many New Zealand products as possible and sourced others from responsible overseas companies.

"Building is not my area of expertise at all ... but I always go back to the first principles of where did this thing come from, how was it grown, how was it made, who made it, and how did they make it." 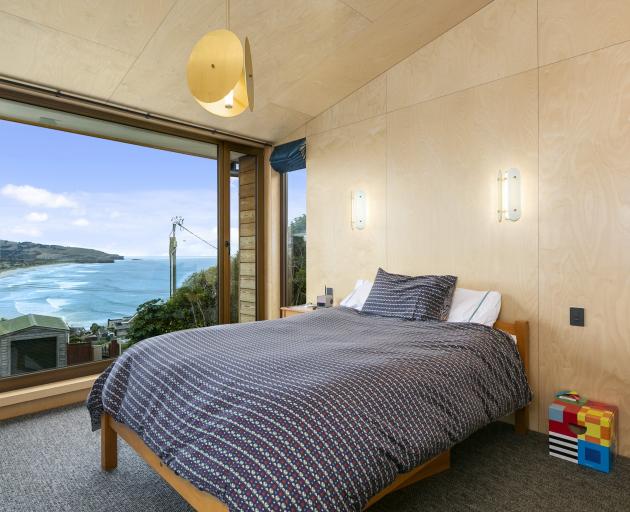 The bedrooms have panoramic ocean views.
In line with this ethos, decks are made from New Zealand-grown, thermally modified Abodo pine — a durable material which, unlike some hardwoods logged overseas, comes from certified, renewable plantation forests.

The same timber in a tongue and groove profile is used for internal wall linings; in other places, these are birch ply or exposed concrete block.

Floors are a mix of floating cork — a natural product with good insulation values — exposed concrete, and wool carpets with felt underlay.

Wool was also used as insulation.

The interior is largely chemical-free thanks to a vapour barrier that separates the inside from the exterior structure, and the internal framing timber being untreated macrocarpa.

The ply, glues and paint finishes contain low levels of volatile organic compounds (VOCs) and instead of the concrete floors getting a traditional sealant, a lithium-based densifier was used during the polishing process. This liquid penetrates into the pores of the concrete, making it resistant to stains and scratches. 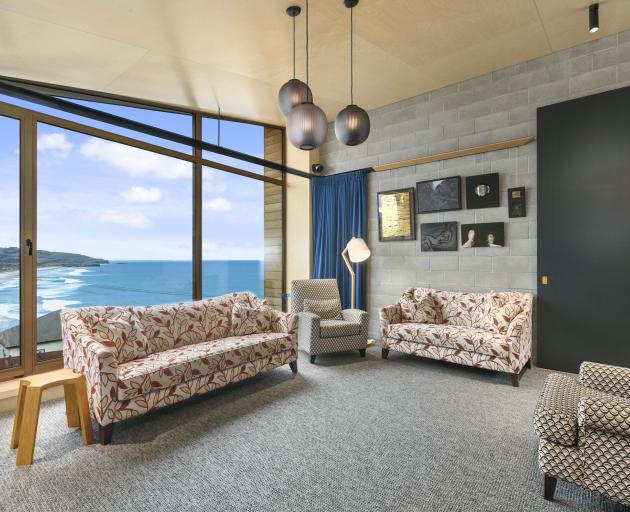 Exposed concrete block walls absorb heat from the sun. Artworks hang from rails and can be easily rearranged.
The owner said she and her husband felt privileged to live where they did and to be able to afford to make some choices that other people could not make.

"I’m not undervaluing that ... and I’m not saying that it’s the perfect house and everyone should replicate it. But there are things like leaving concrete floors exposed in places that are going to get the sun, that don’t cost any extra."

Similarly, having concrete block walls meant people were not paying for plasterboard, stopping and painting.

Research from the Green Building Council showed efficient, sustainable homes were not as expensive as most people thought and the slightly higher costs were fairly quickly recouped in energy savings, she said.

"I think if anyone’s building, they should definitely aspire to build well beyond the Building Code, which is a total minimum, and they’ll see [that investment] back."