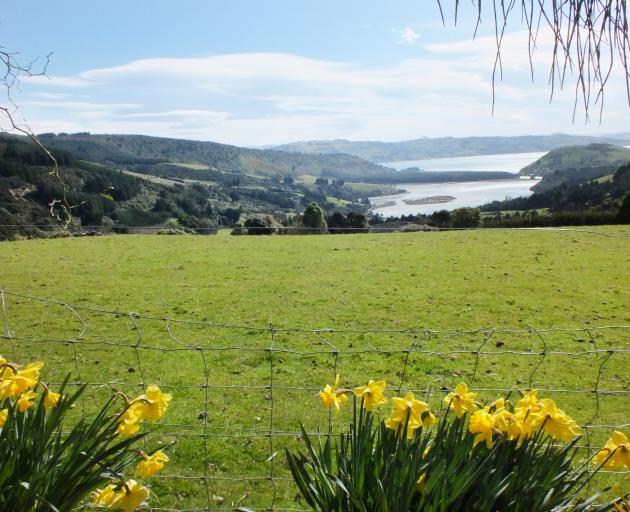 From the garden, there are views towards Karitane. Photos: Gillian Vine
Gillian Vine visits an impressive farm garden near Purakanui.

When Shona Chapman moved to her new home at Mihiwaka 40 years ago, she assumed gardening would be a matter of planting what her mother-in-law grew.

It was logical, as Mrs Chapman senior lived only a kilometre away.

"But I learned my garden couldn't be like hers," Shona says.

With heavy clay on one side and light volcanic soil on the other, the garden had to be tailored to fit.

"And there were very large macrocarpas, 20m to 30m all around," her husband, John, says. 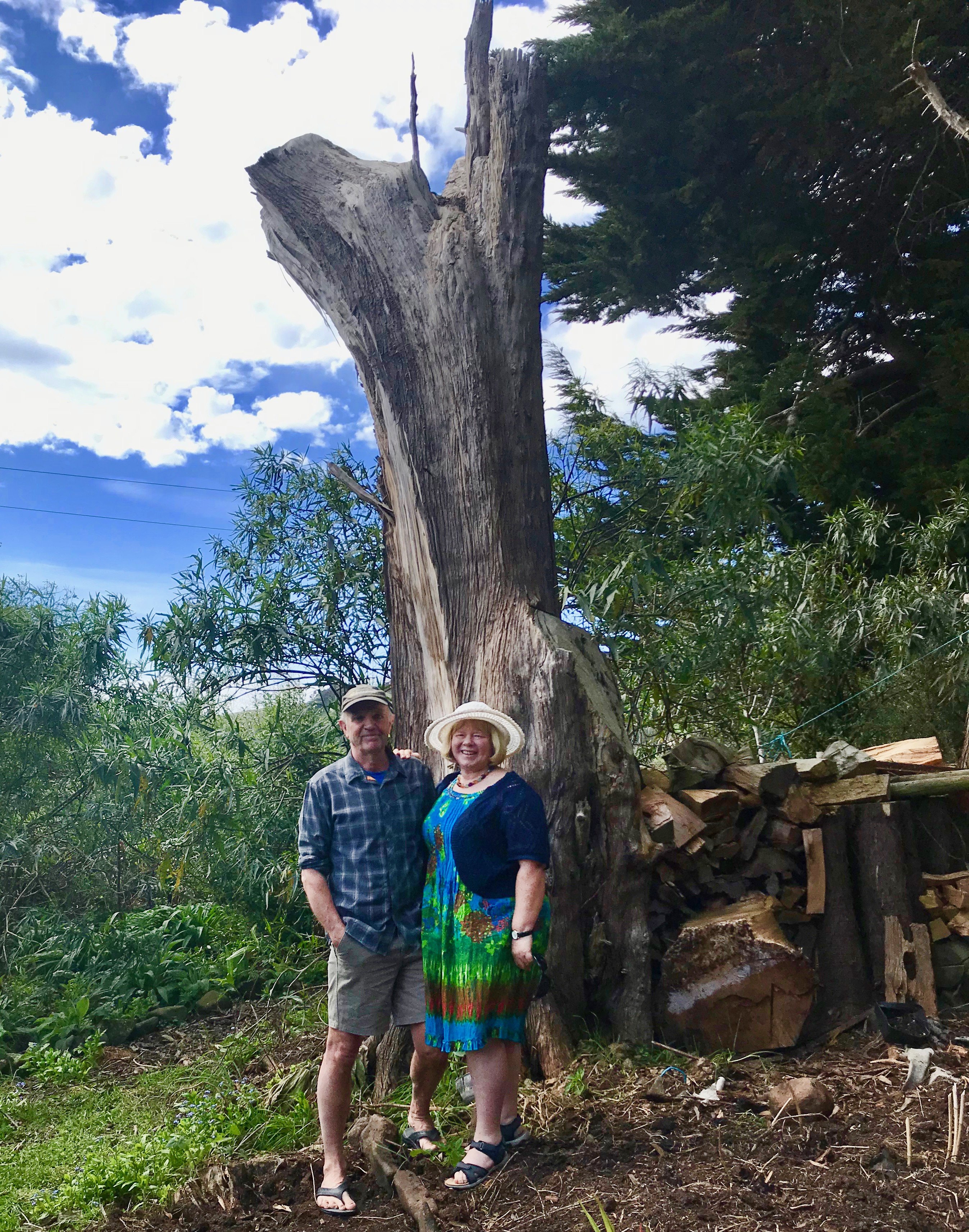 Shone and John Chapman by the remains of one of the macrocarpas that once surrounded the garden.

There was a huge plus, an enviable microclimate which has enabled them to grow against the house a splendid Tecomanthe speciosa, a sub-tropical vine from Three Kings Island. The sole survivor was found in 1945 and it is from this that every plant is descended, including the Chapmans'.

Grown against the house, the stone wall behind it has probably helped the vine acclimatise.

Once the home of the manager of a nearby cream factory, the stone house might have been built as early as 1880. The Chapmans have a 1910 photo showing it with some mature shrubs, supporting their conviction the house was far from new at that time.

When they moved in, "there were sheep up to the door", Shona recalls.

The only garden plants were a patch of jonquils and a cherry plum. John saved a sucker of the plum to replace the original but the rest of the garden was done from scratch.

"It was very pioneer-y," John says.

"We took out macrocarpas but kept the ones that blocked the northerly - [but] the southwesterly still bowls through." 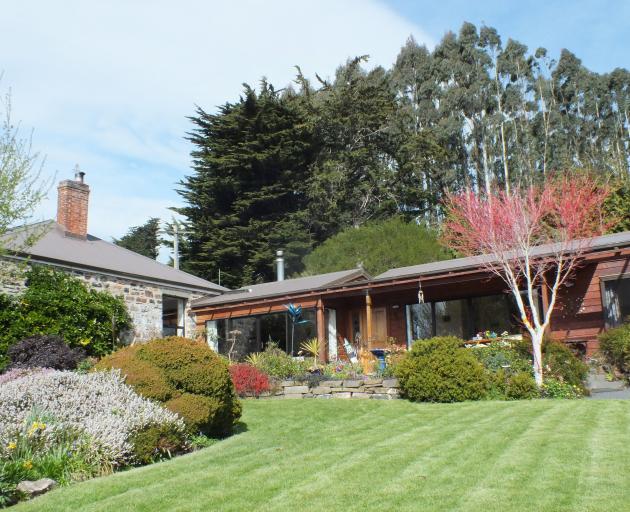 The stone part of the Chapmans' shouse may date back to the 1880s. Against the wall is a fine NZ Tecomanthe speciosa.
Along the drive is an eclectic mix of shrubs, dominated by banksias and proteas.

"You really appreciate them in winter, when they're at their best," John says.

The walls of a cowshed, at least 100 years old, enclose Shona's propagating area. Below it is a yard paved with original cobbles, found by the Chapmans when they cleared years of rubbishy growth.

In a perennial garden below the house is an intriguing ship's bath. How it came to be on the farm is a mystery and it is so heavy John assumes it had to be a strong ship that housed it.

"It was a bit of a job getting it in there," Shona says, recalling heaving on a crowbar and being flung backwards while the bath stayed put.

Canadian red cedar were planted at the back of the garden behind the house but John thinks they may need topping as they have grown so tall. 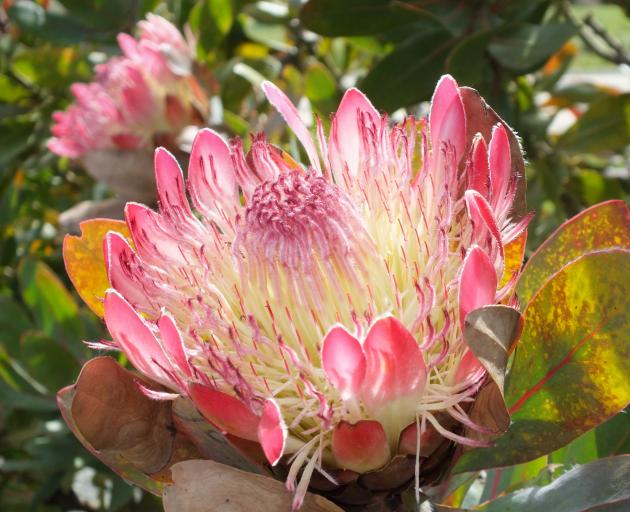 Proteas and banksias give long-lasting colour alongside the drive.
They provide shelter for a shrubbery of exotic and native plants, including kowhai grown from seed gathered on the Chapmans' 400ha farm, and the red and yellow-flowered forms of southern rata.

This area doubles as an orchard, where peaches, apricots, a lime and Cape gooseberries flourish.

Nearby, a path winds through a shrubbery with magnolias, rhododendrons and a Virgilia that kereru adore.

John is active in the Halo Project, which supports healthy landscape development across 55,000ha surrounding the Orokonui Ecosanctuary.

He is involved in planting more native plants and, as a consequence, has observed more birds on the farm.

Three new ponds are already attracting ducks and other waterfowl, while bellbirds and tui flock to the feeder in the lower garden.

One cheeky regular is a kaka, which has worked out how to open the catch on the feeder. In a day, it gets through what it takes the combined efforts of the smaller birds a week to consume.

But the pleasure it gives outweighs any downside of its visits.

Shona and John Chapman’s garden will be open on Saturday, November 2, from 10.30am until 4.30pm. It is one of six that will open as a fundraiser for the Port Chalmers Presbyterian Church. Tickets ($15) include Devonshire tea at Emmanuel Church hall, Station Rd, Sawyers Bay. Tickets (with maps) will be on sale at the hall from 10am on the day or can be bought in advance by phoning 471-0690 or 471-0705.