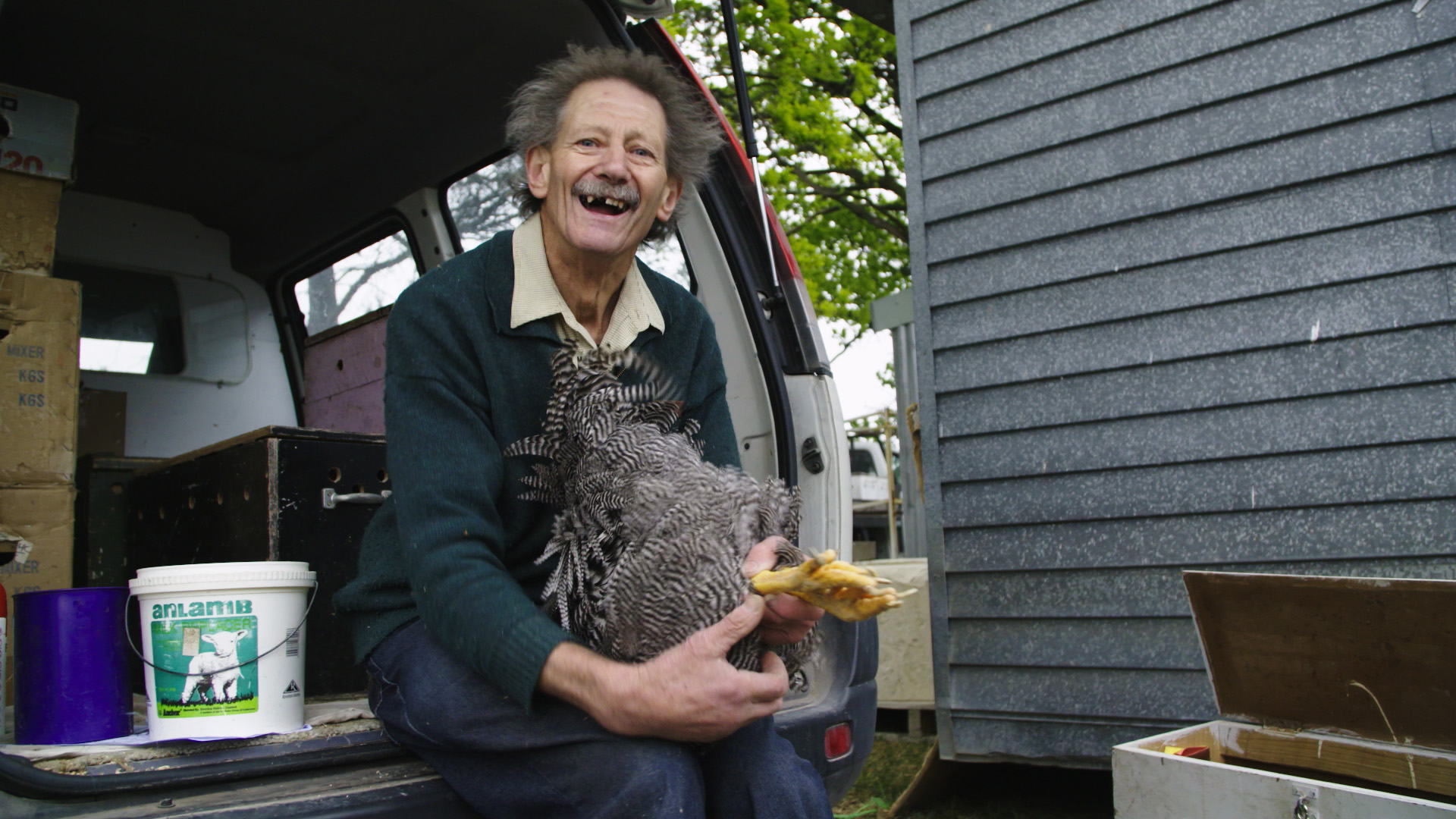 The scene-stealing Brian Glassey with one of his prize-winning barred Plymouth Rock chickens.
Film-maker Slavko Martinov has moved from propaganda to poultry, writes Tom McKinlay.

It’s a brilliant piece of provocative documentary-making that means Martinov now struggles to get a visa for the United States.

At first glance, Propaganda is an exercise in brainwashing produced by North Korea to convince its people of the West’s iniquity, corruption and decay. That was what Martinov wanted people to think when he launched it unheralded on the internet (it’s still there). 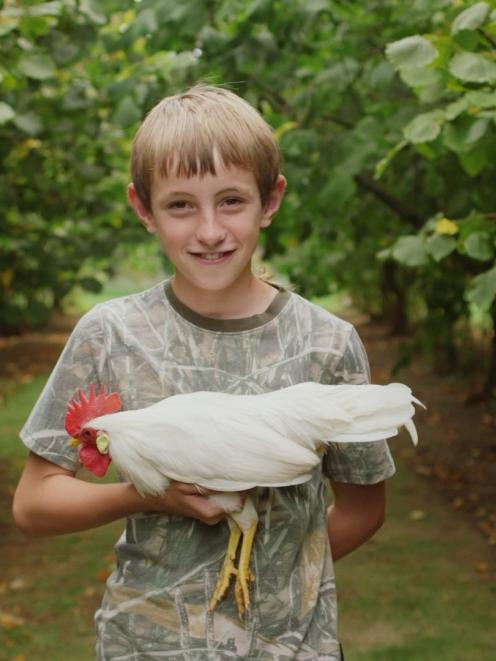 One of the film’s more junior chicken fanciers, Rhys Lilley.
It is indeed a quite searing critique of the West; its track record under the likes of the Bush family, Clinton and Blair; its mind-numbing consumerism. The blowtorch singes all our most cherished institutions with a welder’s accuracy.

It was convincing enough for Martinov to be contacted by representatives of South Korea, convinced he was a North Korean spy and sympathiser, and for a summons and please explain from New Zealand’s counter-terrorism officials.

Job done then. Except sensitivities around the Korean Peninsula have only heightened since.

"Strange times to say the least."

The film-maker currently has a visa application lodged for the US. He’s been told it’s with the FBI and Homeland Security.

"It’s a bad time to have been accused of being a North Korean spy, let me tell you."

So that’s the reputation Martinov has built for himself.

Next up, an analysis of Putin’s Russia? A telling exposé of inequality and where it leads? No. A documentary about chicken shows.

"I am not limited with storytelling,’’ Martinov says by way of understatement.

"Making strong political comment about things is kind of unavoidable for me ... but sometimes the documentary gods come along and drop one in your lap, like this, if you are always curious and asking questions. It is that moment."

The film Pecking Order captures a year in the life of the Christchurch Poultry, Bantam and Pigeon Club, as it approaches 150 years, in the lead-up to the New Zealand national championships. And it is populated by the most fantastic birds — large and bantam — and their extraordinarily ordinary Kiwi breeders, characters straight out of the John Clarke playbook.

Just how Martinov came to make the documentary is a classic case of keeping your eyes open and ear to the ground. He was in Melbourne doing some filming, when he came across a stall at a trade show selling fancy chicken food.

The notion struck Martinov as an impossible fiction. But on returning to New Zealand he discovered the same story is played out up and down the country, for real, and better still, his local club was about to turn 150.

"The first thing that happens when you first hear about the national show circuit, what pops into your head is Best in Show, with chickens, but it’s real," he says, referencing the American dog-show spoof film of 2000.

"That is the pitch. I went to the [New Zealand] Film Commission, I literally said that: Best in Show with chickens, but it’s real."

The commission said yes, though followed up with a phone call to check that it wasn’t going to be political. Stick with the entertainment, it advised.

Martinov did. Kind of. Not only had he tumbled into the world of Plymouth Rocks and Orpingtons, but it turned out there were ruffled feathers at the Christchurch club, a dispute concerning pecking order. Human drama.

"Some people, I find it weird, come away going, ‘Oh, I loved the chickens, they were beautiful’ ... and I’m thinking: ‘There were human beings in there, there was politics, come on!’," Martinov says of the film.

"They were fixated on birds. Which is fine, hey. If that’s what you enjoy."

Martinov is in a position to appreciate their perspective. He grew up with chickens on the quarter-acre section of his grandparents’ house, where he was assigned the task of collecting worms to feed them.

"They are actually pretty smart social creatures, but you don’t start to realise that until you start to hang around with them," he says.

"They have their own personalities and temperaments. They are special wee animals."

But in the end, the people are the stars of Pecking Order.

As Martinov tells it, there was an obvious story arc for him to follow, as the club members prepared over the course of a year in the hope of winning "best in show".

But he was also looking for other layers, the sociology and psychology of it all. So he started going to a few club meetings.

"The thing is, they are such classic Kiwis, so dry and understated it took me a long time to realise there was some real s*** going on, and had been going on, because no-one speaks about it. One day, there was one moment, and we looked at each other out of the corner of our eyes — me and the cameraman — and went away and said ‘there’s something going on here’."

Pecking Order is not, though, all cat fights at the chicken club by any means.

The characters Martinov unearthed are as uniquely minted and dinkum as they come.

Take, for example, Brian Glassey, mild-mannered bachelor and Plymouth man, given to 20-hour days of chicken rearing. A man of more equable and affable disposition is hard to conjure. Even club president Doug Bain, the man some would like to see on the chopping block, is a gem behind the combed-over bantam rooster exterior.

The octogenarian is a man of old-fashioned standards and principles, articulated without window dressing in a fabulous Southland burr.

Doug opens the film, bathing one of his chickens.

"When you start out, things seems really unusual," Martinov concedes, of such early experiences.

"Now nothing much fazes me. I went out to a paddock yesterday to meet one of them and there was a heavy frost, and I just speculated without thinking, ‘Oh, yeah, the frost will be hitting the birds quite nicely, for the winter. Good, that’s good’. And I catch myself and think ‘what’s happened to me in the last three years’?"