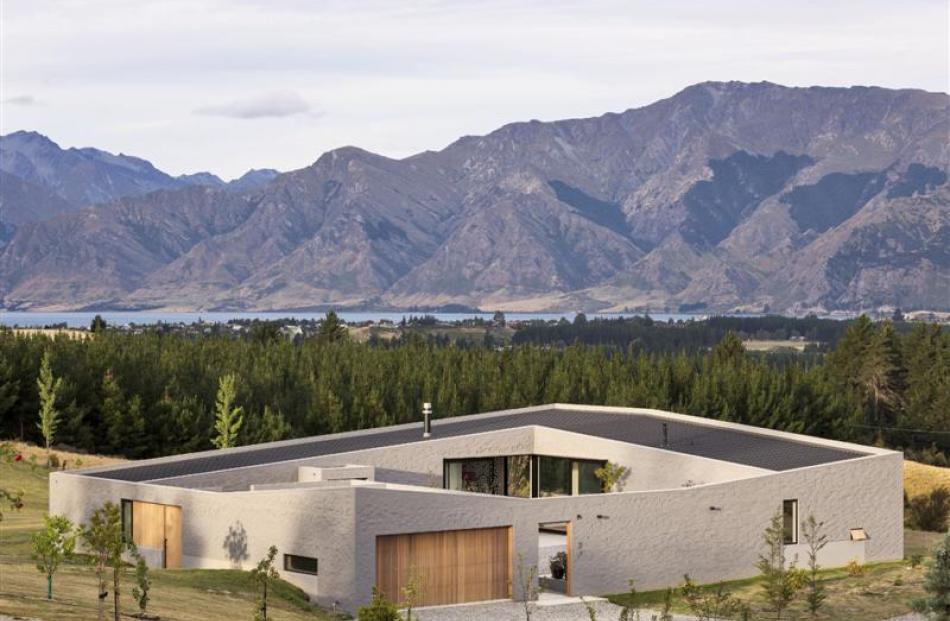 The roofline echoes the mountains around, while the low profile house is bunkered into its immediate landscape, echoing early settler buildings. Photos by Patrick Reynolds. 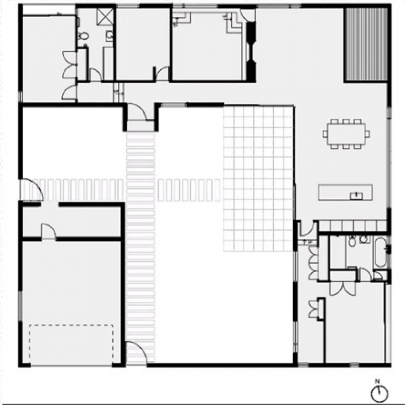 The courtyard is at the the heart of the house. Architectural Plans by Glamuzina Paterson Architects. 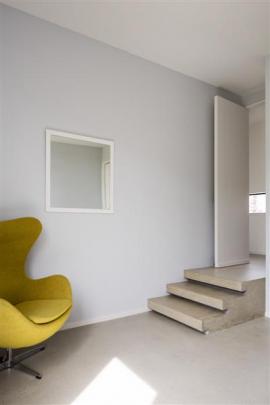 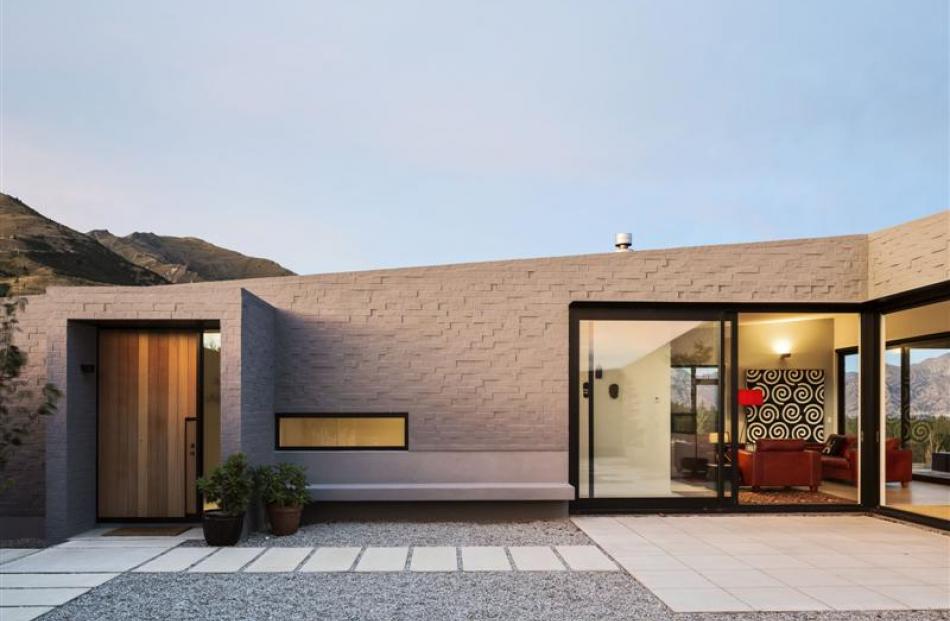 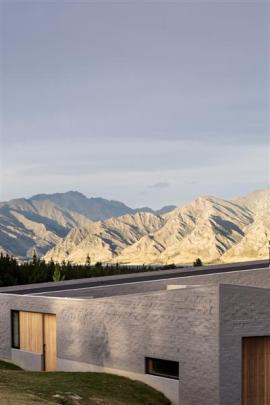 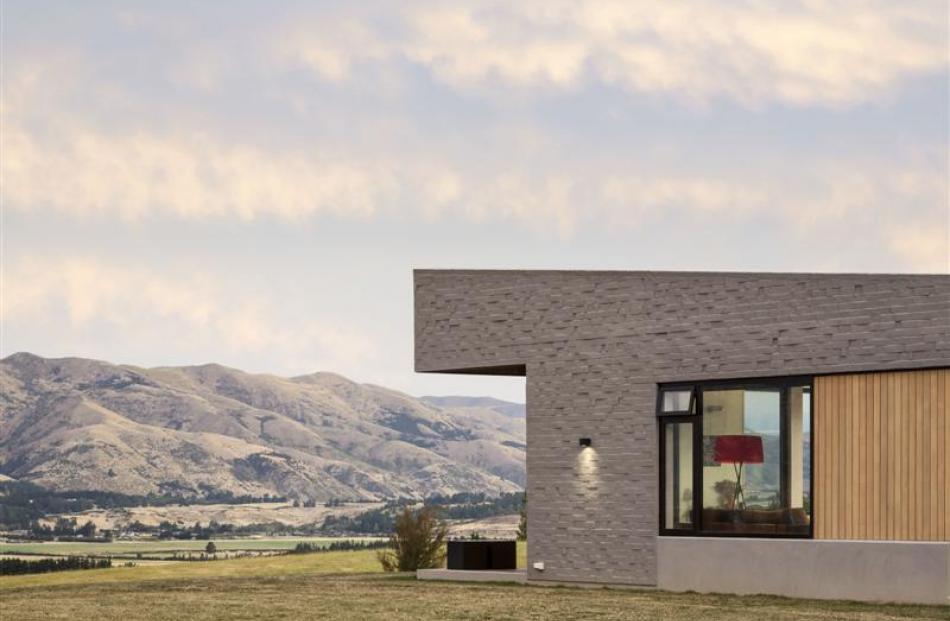 Anyone building a home has a vested interest in the outcome, but an Auckland couple has taken that involvement to an entirely different level. Kim Dungey reports on an unconventional house that recently gained national honours.

The first sign it would be no ordinary build was when the clients handed the architects their own plans and a ''brief''' that ran to three pages of text plus diagrams.

They'd planned their dream home for ages, they explained. Had the site for six years, holidayed there in a caravan.

Then they presented the scale model they had made from 3mm foam and cardboard. It showed where the bedrooms and living spaces would be, and it came apart so they could look through the windows from inside. Unlike many new homes in Central Otago, this one would be built to a strict budget and instead of opening up directly to the view, would be surrounded by a walled courtyard. Were they crazy?

Architects Dominic Glamuzina and Aaron Paterson, of Glamuzina Paterson Architects, didn't think so and neither did their peers. Late last month, it was named one of four winners in the housing category of the New Zealand Architecture Awards. In lieu of a big budget, the judges said, the Auckland architects had extracted a full return from the home's organisation and from the sculptural use of seconds-quality bricks, irregularly laid to cast shadows across the exterior walls.

And the courtyard? It does provide shelter from the elements, as the Auckland-based owners hoped. But it also does something they had not thought of, serving as a transition zone between being in the house and being outside in the wider environment.

The landscape around Lake Hawea is beautiful but can be overpowering, says one of the owners, Adrian Knowles, recalling how a friend was out in the garden quite a way from the house and had to go inside because she found it ''too exposed''.

''She's used to living in central Auckland and was overwhelmed by the immensity of the environment, the mountains and [that] you can see for miles up and down the valley.''

''So the courtyard mediates between being inside and being right out there amongst this enormous environment where you could potentially feel a bit vulnerable.''

Knowles, who has worked in the health sector and in performing arts, initially designed the courtyard house for a site in Wanaka. But six years ago, he and partner Trevor Coe - a consultant anaesthetist - bought the 4ha block at Lake Hawea and realised the design would need to change because of the geography. Crucially, they knew when they had reached the limit of their abilities and needed to involve professionals.

Some architects would not like such a precise brief but the collaborative approach worked well, he says.

Resolving issues they had struggled with and adding value to their basic design, Glamuzina and Paterson created a roof-line that would rise and fall to echo the surrounding mountains, used changing floor levels to demarcate different parts of the house and bunkered the whole thing in the landscape so it was connected to its immediate environment.

The resulting home recalls early settler buildings that used low stone construction to deal with Central Otago's extreme climate. Living, dining and sleeping spaces are on the northern and eastern edges, which get the most sun, while niches and overhangs protect the building from hot summers and harsh winters. The garage is enclosed within the home's outer wall.

The main bedroom and the guest accommodation are set slightly below ground level and, to give guests privacy, are at opposite ends of the L-shaped home.

In between are the living area, with sliding doors opening to the courtyard; the music room (where Coe plays the cello and piano); and another room, which can be used for reading or sewing, as a sitting room for guests or as a third bedroom when needed.

From the 14m by 18m courtyard, they can see mountains over the walls or through the house and across the valley. Inside, some windows face away from the ''big event'' - the mountain across the lake - and force them to look in the other direction, which Knowles says is ''an equally lovely view but not what you would immediately look at''.

It's a little like the Sistine Chapel, he adds, laughing. Few people who have been there could tell you what is on the floor, but it is almost certainly as much a work of art as the ceiling.

Having dreamed of the house for the 20 years he has been holidaying in Wanaka, Knowles was keen to see it taking shape. So when their ''fantastic'' builder, Bryce Dunlop, started work, he gave up his job and lived on site for almost a year in a small shed and caravan.

''Mainly that's a testament to the builder,'' Dominic Glamuzina says, ''but also we did spend a lot of time trying to make it smaller and simpler ... The interiors are really simple - just concrete floors and Gib. The spaces are what make it.''

To achieve a solid look at reasonable cost, the architects sourced seconds-quality bricks, not caring that they were chipped or odd colours because they would be coated in a thin skim of plaster. And these were laid with deliberate imperfection - even if it did initially go against tradesmen's exacting standards.

''We kind of joked they should probably have a couple of glasses of whisky in the morning to make it a bit crazier.''

Knowles says he and Coe had to compromise on some materials but didn't want to spend the rest of their lives paying off a mortgage.

''I understand that good design costs money because it takes a lot of work to refine a design to the point where it works really well. But I'm a little disappointed when you look around and realise that often things that are really well-designed or beautiful are beyond the reach of most people.''

''We built this house for half of what you would pay for a tiny apartment in central Auckland. It's crazy.''

Comfortable and ''perfectly'' suited to their aesthetic, the home is also easily maintained, he says, describing how he recently filled a wheelbarrow with firewood and wheeled it through the living-room doors across the concrete floor to the fireplace.

''It's very straightforward and from our point of view, that really suits us because our big thing is actually the garden.''

The pair began planting on the site a year after they bought it, putting in more than 1000 trees which are supported by a bore, pumps, timers and more than 4km of irrigation pipe.

''We're both in our 50s. We haven't got 50 years to wait for the trees to grow. We want to be able to enjoy the garden as soon as we can and to give it the best chance of growing normally.''

By the time they have left the ''rat race'' and are living there full-time, the hard work will be done. But it is also a long-term project.

''We asked ourselves what will we do when we are 75? Go to the mall? Go shopping? Go on another holiday? By doing this, we have an occupation and we'll be interested and mobile for the rest of our lives ... It's a constantly evolving thing that you potter around in and do things to.''

Unlike those who only dream of retiring to their favourite holiday spot, the couple are well on their way to realising their vision.

''The trick is to hold on to the idea and don't let go,'' Knowles says.

''Then, whether you know it or not, all the other decisions you make in life help to keep you pointed in that direction.''