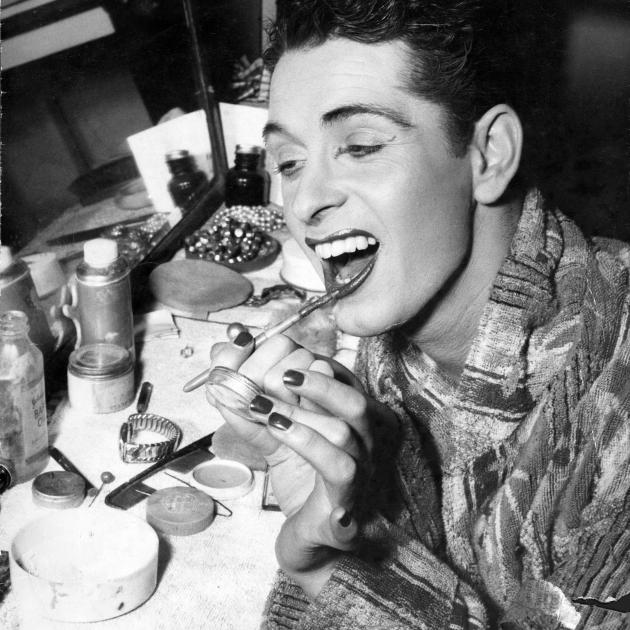 John Hunter applies his make-up before a performance at Sydney's Empire Theatre. Photos: Supplied
John Hunter was New Zealand’s most feted female impersonator in the late 1940s and early ’50s,  writes Chris Brickell in this extract from Queer Objects.

John Hunter was a teenager when he first put on a frock and performed in front of servicemen during World War 2. The young New Zealander was too young to enrol in the army, much less go overseas, but he joined civilian groups - the Arcadian Revellers Review and the St John Ambulance Concert Party - and entertained the American and New Zealand troops in the military camps of Auckland.

John's kit contained a small cardboard box. Measuring 915 centimetres, the black box with red lettering originally held Baisenko joss sticks, a Japanese brand, but John used the container to store stage make-up: tubes of grease paint in gold paper that smelled of oil and pastel rather than incense. Grease paint was an essential ingredient in any actor's arsenal. 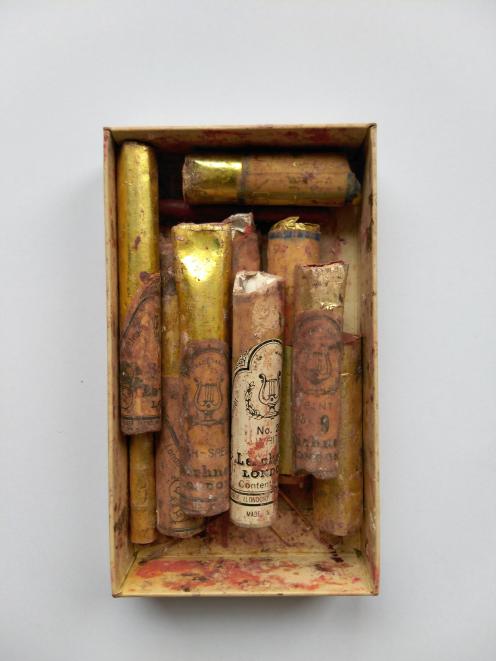 Grease paint lived on into the era of electric stage lighting. Each of John's examples is marked with Leichner's trademark harp symbol and a number. Twenty is a pure white, four-and-a-half a flesh colour, and there are eight others in the box. These colours feature on the chart in the Leichner company's 1938 Handbook on Make-up for Stage and Screen, with its 61 shades of cream, buff, peach, yellow and brown, as well as white and black.

John Hunter carefully prepared for his role each time he went on stage.

After a shave to remove his 5 o'clock shadow - and a cigarette for luck - he sorted out his make-up. "First comes a brisk powdering of face, chest and arms followed by the application of grease paint base. Eyebrows are next, tinting and arching occupying some minutes. Then lipstick and the tinting of fingernails completes the toilette." The Leichner Handbook gave further detail about how to apply the grease paint: "Take a stick or tube ... and smooth it all over the face including the ears, right up to the hair - as thinly as possible - and pat it well in so that you get a perfectly smooth surface."

John peeled off the surplus wax paper as each stick wore down. His makeup box included several toothpicks to assist in applying small amounts of grease paint and he used carmine on his cheeks. A photograph of John's make-up table shows the jars of carmine alongside a range of other objects: a comb, a powder puff, a bottle of acetone and one of baby oil. Make-up successfully applied, then John donned a foundation garment, an uplift bra, stockings (a "seductive mesh type"), a frock, rings and bangles and a wig. As one newspaper put it, stage make-up helped John metamorphose "from man about town to svelte siren in thirty minutes". 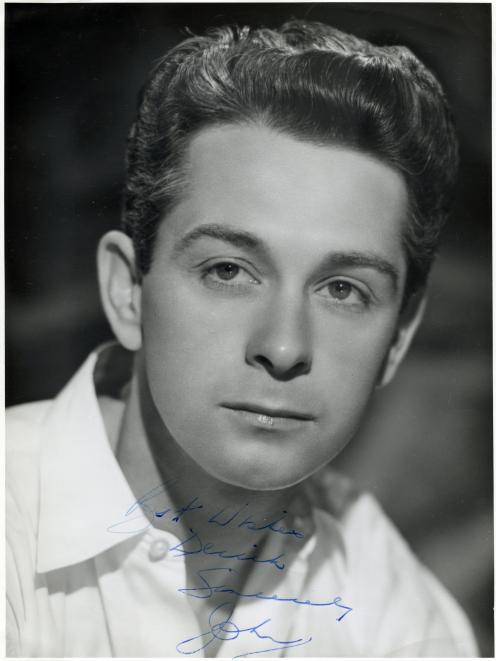 John Hunter had a 10-year career as a female impersonator. In 1944, as the war drew to a close, he joined The Kiwis, a group of entertainers who returned to New Zealand after entertaining troops near Middle Eastern battlefields. The Kiwis toured New Zealand and treated audiences to variety shows with such alliterative names as "Alamein Antics", "Cairo Carnival" and "Desert Days". John appeared in a great many skits as a nurse, a maid, a can-can girl and the popular singer Gracie Fields. After the war the men set out for Australia and played extended seasons in Brisbane, Adelaide, Perth, Sydney and Melbourne. The Kiwis Revue, as the group was now called, popped back to New Zealand for the occasional sell-out trip, and in 1950 they returned permanently. The cast of funny men and female impersonators entertained audiences for another four years.

John was The Kiwis' most feted performer. The promoters and newspapers gushed. As one writer declared, he "has the face and figure when made up to make the deception entirely convincing. A natural charm of manner on stage gives the finishing touch to anything he is called upon to perform". After an appearance in the small New Zealand town of Whakatane in 1945, the local newspaper described the young man's transformation as "something of a miracle. The characterisations were so convincing that one was at times completely at peace with the idea that it could not possibly be an all-male cast. John's remarkable lightness on his feet enables him to do ballet dancing in a manner of which any girl could be genuinely proud".

John later told an interviewer about his work. "I played the ingenue roles ... I had quite a reasonable singing voice, a soprano voice." On tour around New Zealand in 1950 he played a fiancee, a sarong girl and a mysterious "lady with a past". In a skit titled The Roaring Twenties, John and fellow female impersonator Ralph Dyer, a stalwart of the wartime concert parties, dressed as flappers, while two other company members appeared on stage as their "boy friends".

"We had beautiful clothes," John remembered. "In the Charleston, in the Roaring Twenties scene, we wore those authentic beaded gowns, some of them really were museum pieces, they were quite lovely." In Australia John became well known for his role in the balcony scene from Noel Coward's Private Lives. But that was not all. "I remember dancing the can-can girls ... and I used to wear those slingback patent leather shoes, you know, with the cut out heel, and whoops! I was doing the big high kick, and off went the shoe into the stalls, and I heard a man call out `Howzat!'. He'd caught it." 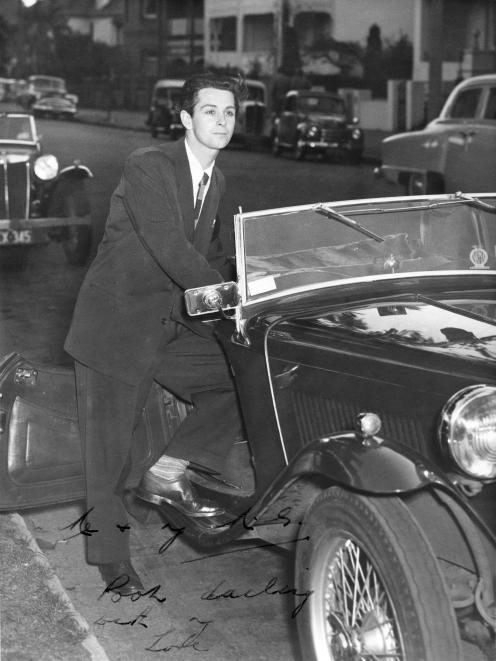 Shoes were not the only source of mishap. The potions on John's make-up table did not always behave themselves:

"I was ready to go on at Her Majesty's and the call came over the intercom for `standby', and I was just ready to go. I turned for one more dab of powder on the chin or the nose and I had a large bottle of acetone sitting on the dressing table and it fell off and spilt and went all down the front of a synthetic white jersey gown which I wore for the Private Lives scene. The whole of the front panel of the jersey gown just disintegrated, there was a great gaping hole, and I could hear my entrance music being played for about the third time, and quickly my marvellous dresser, Marie Ross, grabbed a double silver fox fur that was used in another scene, and she said, `Quick, hold it against you and don't move.' Of course when I walked on stage [my director] Terry Vaughan looked up from the pit, and frowned like mad, and thought, `What the hell has he got that bloody animal in front of him for?' And of course I was in dreadful pain, I'd burnt all my legs with acetone, burnt my tights through, it was shocking!"

While John crossed gender on stage, in his everyday life he embraced a sophisticated, cosmopolitan kind of masculinity that was fairly unusual in 1950s New Zealand. He had publicity photos taken while hopping in and out of a flash car dressed in a sharp suit, and a souvenir programme listed his hobbies as skiing, tennis, reading and Chinese food. John and his friends also belonged to a broader tradition of chorus boys, cross-dressers and queer culture. The New Zealanders were the antipodean equivalent of the British Soldiers in Skirts, the Americans' long-running show This is the Army, and other entertainment groups that had more than their share of queer performers. Historian Allan Berube suggests these troupes provided gay servicemen "with a temporary refuge where they could let their hair down to entertain their fellows". 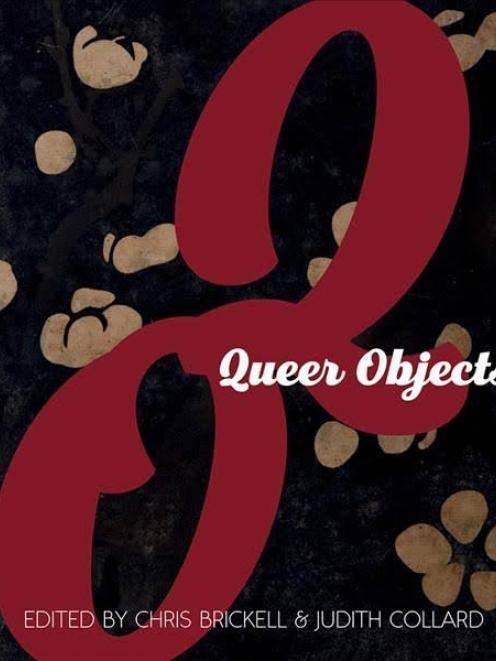 Queer Objects, edited By Chris Brickell and Judith Collard, published by Otago University Press, RRP$50.
When John Hunter opened his make-up box and reached for the tube of Leichner four-and-a-half, he readied himself for a quiet transgression of sorts. The mostly unquestioning heterosexual audiences lapped up the impersonations. He remembered the adulation decades later. "The queues at the stage door for autographs, and goodies, and chocs, oh dear, they were so nice. I used to get some wonderfully funny letters. Loving ones, and funny ones." John and the other female impersonators became the object of "square" (that is, heterosexual) men's gaze and they inverted the taken-for-granted assumptions about the kinds of bodies those men would be attracted to. As Yorick Smaal explains in the Australian context, "queer men could delight in the male gaze with tacit approval, willingly objectified and desired in ways they were usually not". All the while, the homosexual men in the audience revelled in the sumptuous displays played out before their eyes and imbued them with camp meaning. Many bought tickets and went along in groups, eager to see their friends in frocks. Some teenagers went with their parents, revelled in the "camp sensibility" of the shows and speculated about the sexuality of the performers.

Those on the gay party circuit got to know John Hunter, "the belle of The Kiwis", during the early 1950s. The Kiwis threw house parties and made friends as they toured New Zealand. Some gay locals, including Christchurch man Derrick Hancock, befriended the impersonators and made a point of catching up with The Kiwis whenever they were in town.

Derrick's archive of memorabilia, now in the Alexander Turnbull Library, includes a movie star-style photo signed: "Best wishes Derrick, Sincerely, John". The makeup kit was also passed along the line. John handed the small box to David Wildey, a one-time lover who, like Derrick, kept a collection of newspaper clippings and programmes documenting John's career. When David went into a rest-home he gave the box to his friend Roger, and Roger gave it to me.

The make-up box is a queer heirloom passed through the generations.

Chris Brickell is an assoc prof in gender studies at the University of Otago. 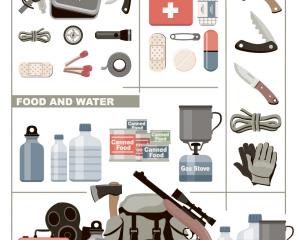