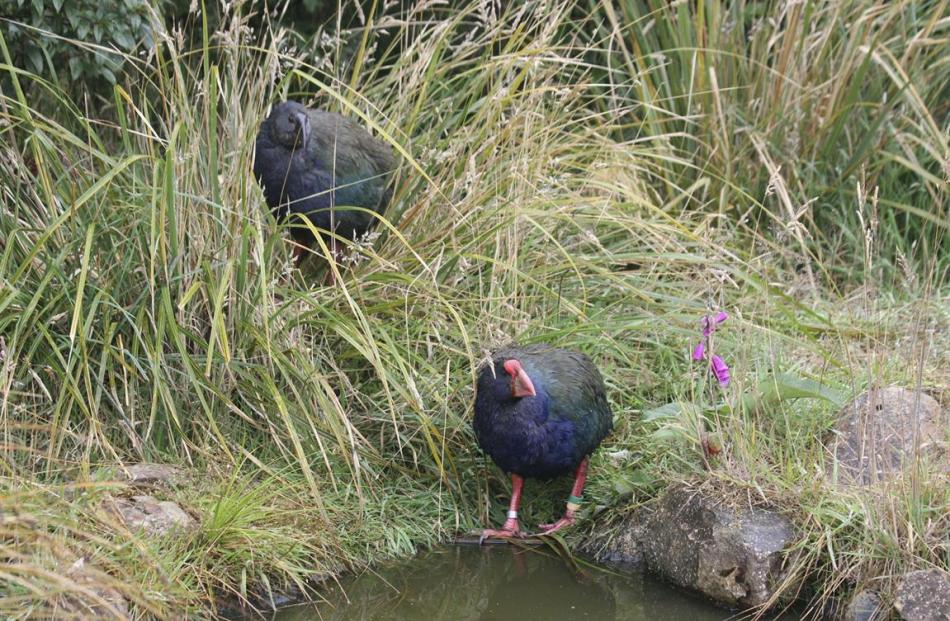 The takahe chick clambers through a tussock to feed on the seed-heads, following the example of its father, Quammen. Photo: Neville Peat 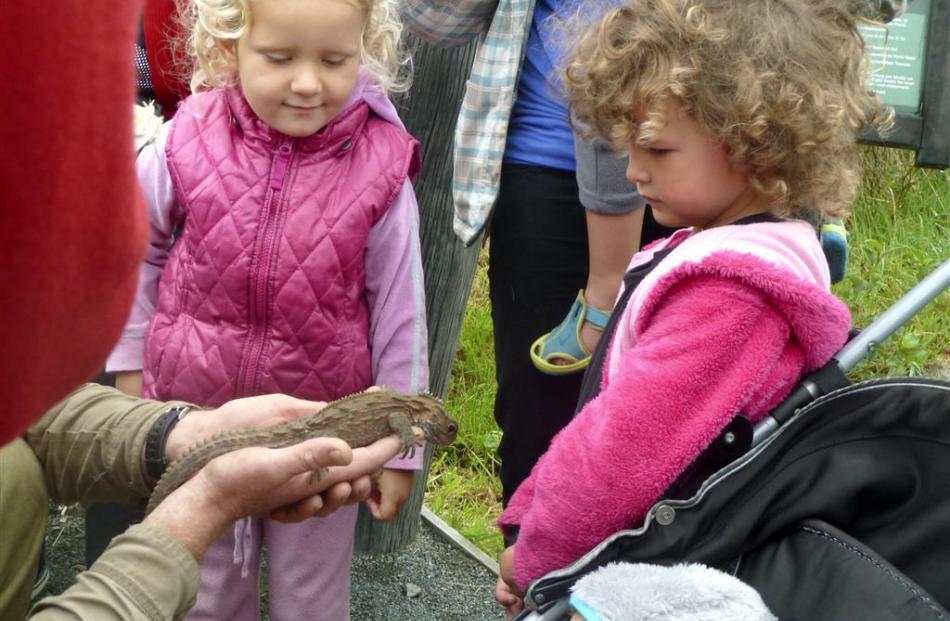 Children on a Nature Watch day in a close encounter with one of the tuatara. Photo: Alyth Grant 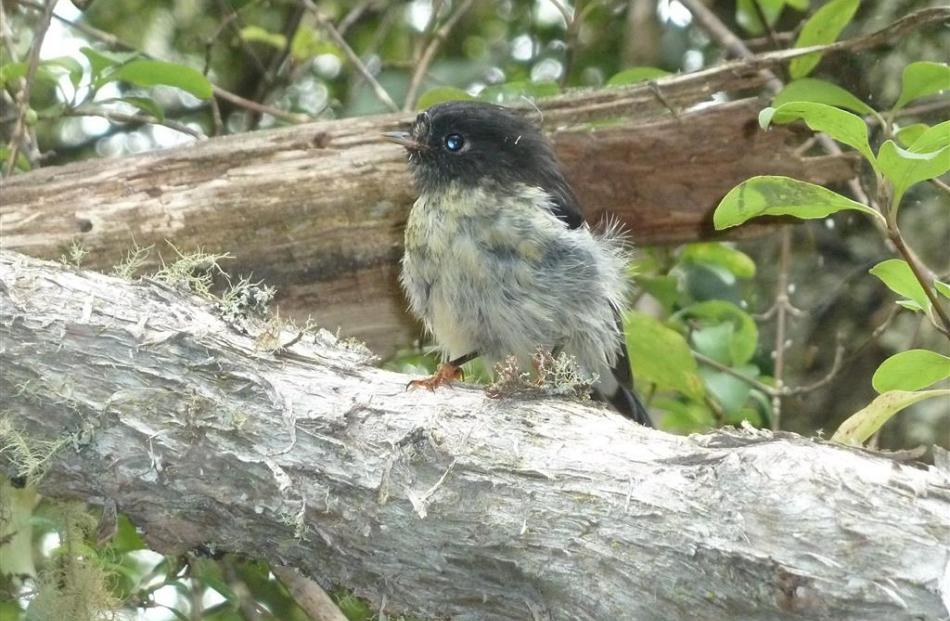 A quiet moment in the bush: a juvenile South Island tomtit perches to preen and lose a few baby feathers. Photo: Alyth Grant 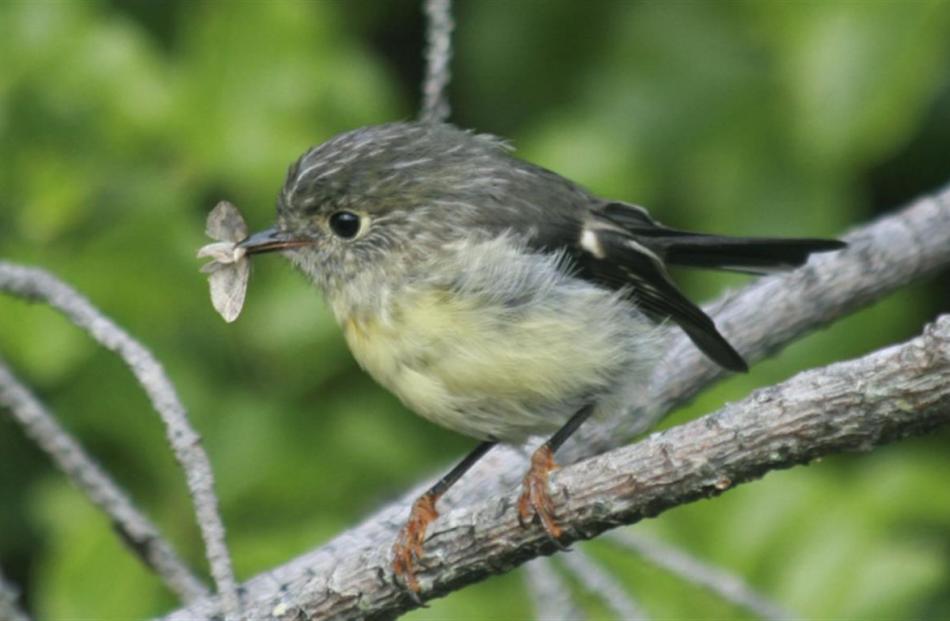 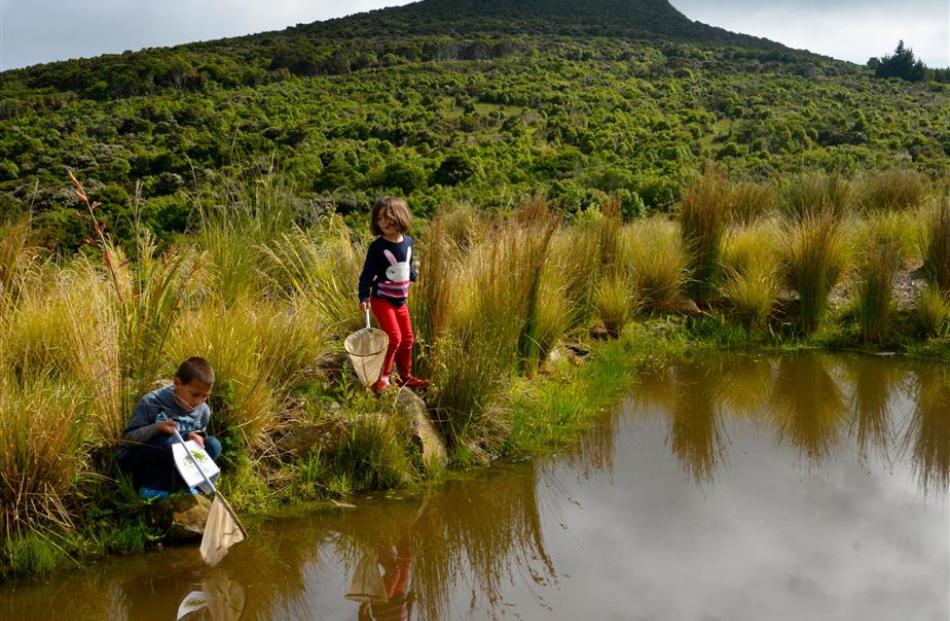 Alyth Grant reflects on Orokonui Ecosanctuary as a place of experience and learning.

Coming back from a leisurely walk around the main Orokonui Ecosanctuary track one afternoon recently, I noticed a group of visitors near the main pedestrian gate with cameras poised.

I was keen to see what had caught their attention. I might have guessed: it was the ecosanctuary's takahe family, browsing on heavily seeding clumps of tussock grass.

Quammen, the adult male, was clambering right into the middle of a large plant - so carefully nurtured by the volunteer planters - to get at the seed-heads. He was stripping them with his massive beak.

Following close behind was the young chick. Like all young, the chick was learning from its parent about the world and in this case, the foraging potential.

"So they don't just feed on the base of the grass stems,'' I thought, "but on the seeds as well.''

My musings on this lovely moment I was sharing with the delighted visitors gave me satisfaction on several levels, not the least the sheer joy of watching these big beautiful birds now obviously so much at home and thriving in the environment we have created for them.

They certainly fulfil the "advocacy'' role given them by the Department of Conservation. There could be no better ambassadors for their species.

But on another level there was the pleasure I get from always learning new things about the flora and fauna of the ecosanctuary.

As a non-scientist, I learn at the most basic level through observation and direct experience.

Each year in April, Orokonui holds an interactive nature experience called Nature Watch and this year it coincides with the inaugural Wild Dunedin Festival, celebrating the city's natural heritage, on April 22-24.

Nature Watch is something more than just family entertainment, though it is that too.

Poet Michael Harlow, in Brian Turner's new book Boundaries, says the most fundamental and significant relationship we enter into as human beings is "our living relationship with the natural world - what we still call Nature''.

Watching nature enriches our lives by making us aware of ourselves as simply part of the living world. It can be approached in different ways.

Some people prefer to be alone in the quietness of the bush, listening and watching and letting the birds come close. Parents may join their children "pond-dipping'', observing their excitement at discovering freshwater creatures, perhaps their first venture into scientific study.

Then there will be those who choose to join a guide and learn more about the botanical life of the forest.

Every visitor will take away a new experience or observation.

The tuatara on show at Orokonui provide plenty of education, despite their slow ways.

Watch as a mealworm is tossed in front of one.

After a few seconds, when the mealworm comes out of its shock freeze on landing and begins to squirm, the tuatara will react to the movement and snap at the mealworm, slowly chewing it with the jaws of an efficient predator, and at the same time educating and entertaining onlookers.

Other people might want to probe more deeply into the secrets of the tuatara world, keen to know how this survivor from the dinosaur age will adapt to a world of human-induced climate warming.

University of Otago zoology students and staff spend many hours following the movements of more than 80 tuatara roaming free in the ecosanctuary.

They are studying the effects on the tuatara of a climate that is cooler than that of their Stephen's Island/Takapourewa home in Cook Strait.

Ground temperatures during egg incubation determine the gender of the hatchlings, with a higher temperature tending to produce males.

So Dunedin's cooler climate could be advantageous for tuatara in future, ensuring a good supply of female tuatara.

Orokonui is not only a safe haven for our flora and fauna, and a place where visitors can deepen that "living relationship with the natural world'', it is also a living laboratory, contributing to the insights of the scientists whose work is vital to the deeper understanding of nature that we need in order to protect it, and ultimately ourselves.

- Alyth Grant is a trustee, volunteer and guide at Orokonui Ecosanctuary. She is involved in furthering its educational role in the community.