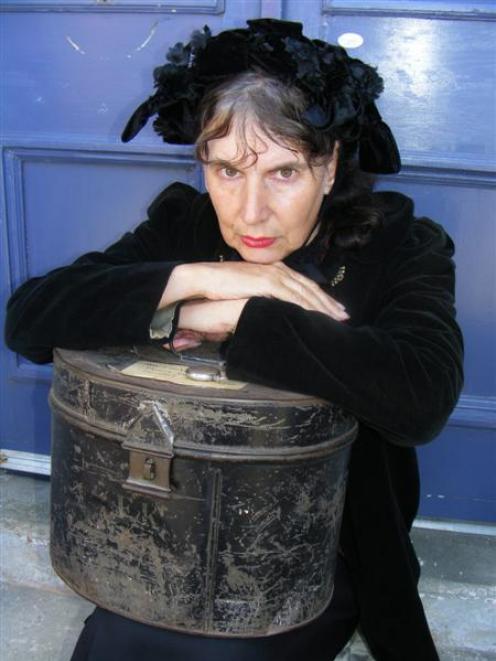 Carol Krueger as Minnie Dean.
She was one of New Zealand's most infamous killers, until her life finished at the end of a rope. Now a new Dunedin play has brought her back to life. Nigel Benson meets Minnie Dean.

Williamina Irene McCulloch would have given Invercargill a wide berth if she had known what was in store.

She told neighbours when she arrived in 1868 from Tasmania that she was the widow of a physician, although no evidence of her marriage or the death of her "husband" has ever been found.

All that is known is that she was born on September 2, 1847, at West Greenock, Renfrewshire, in Scotland.

She died as the only woman to be hanged in New Zealand.

In 1880 the couple adopted 5-year-old Margaret Cameron, but the Depression had hit New Zealand and the Deans were declared bankrupt in 1884.

In 1886, the family moved to a two-storeyed homestead in east Winton, called "The Larches", which is today situated at 38 Deans Rd, RD2, Winton.

However, bad luck dogged the family and the house burned down soon after they moved in.

Charles Dean built a small two-roomed dwelling in its place and began raising pigs, while his wife started taking in unwanted babies for payment.

"Baby farming," as it was known, was a legitimate business at the time, with about 80 licensed baby-farmers in Otago and Southland.

It was a Victorian era of loose morals and tight lips. Do as I say, not as I do.

A time when contraception was unavailable, abortion was dangerous and unmarried mothers were ostracised.

Children were either taken in for five to eight shillings a week or adopted for lump sums of between 10 and 30.

She soon had up to 10 foster children in her care.

But in 1889, 6-month-old May Dean, whom the Deans had legally adopted, died of convulsions after a three-day illness.

The coroner exonerated Dean of the deaths but told her to reduce the number of children living at "The Larches" and to improve conditions there.

The New Zealand infant mortality rate at the time for children of European descent was between 80 and 100 for every 1000 live births, so the deaths were not that unusual.

But, the inquest provoked community outrage and Dean was compared with baby farmers in Britain and Australia who had been convicted of murdering infants for financial gain.

She became increasingly furtive, and when 4-year-old Willie Phelan died in her care in 1894 she buried him in her garden to avoid the scandal of another inquest.

But everything would unravel the following year.

On April 29, 1895, Dean travelled to Bluff to pick up Dorothy Carter, before travelling north towards Dunedin to receive another unwanted infant, Eva Hornsby.

Police believe Dean then took Dorothy on the train from Winton and changed trains to get to Lumsden. During the trip to Lumsden she killed the child and concealed the body in a hatbox she was carrying.

After staying overnight in Lumsden, she boarded the Waimea Plains train to Gore, where she then boarded the Dunedin Express.

At Milburn, she met Jane Hornsby, of Kaikorai, leaving the hatbox and its contents in a waiting room.

She left Mrs Hornsby at Clarendon, waved goodbye and then smothered 1-month-old Eva Hornsby, before boarding the train back to Clinton.

On the way back she picked up the hatbox at Milburn and returned to Winton with the two dead babies.

But, a railway guard, James Kay, later reported he had seen a woman board the train with a baby but disembark without it.

On May 9, police searched "The Larches", where they discovered the bodies of Dorothy, Eva and Willie in Dean's flower garden.

She was immediately arrested and sent to Dunedin Women's Prison to await trial.

An inquest found Dorothy had died from an overdose of laudanum (an opiate-based painkiller) and Eva from asphyxiation. The cause of death of Willie was not established.

Authorities believed up to six children died in Dean's care, although only the three bodies were ever found.

There were six healthy, well-cared-for children, including adopted daughter 15-year-old Esther Wallis, living at "The Larches" at the time of her arrest.

Dean was represented at trial by a young Dunedin barrister called Alfred Hanlon, but even he later said he believed his client was guilty and speculated she would have continued her activities had she not been caught.

"The extraordinary nerve of the woman is illustrated by the fact that she brought the body of the Carter baby all the way from Lumsden in the hatbox to meet Mrs Hornsby," Hanlon later wrote in his account of the case.

"The two women met at Milburn and went by train to Clarendon, that box with its gruesome contents being left in the waiting room at Milburn. While waiting for the south train at Clarendon Mrs Dean asphyxiated the child and then rolled it up in a shawl. When she boarded the train she placed this in a rack above her seat and at Milburn she collected from the waiting room the tin [hat] box with the corpse of the other child so that on the journey to Clinton she had one body beneath her feet and the one above her head."

After a four-day trial which started on June 2 at the Invercargill Magistrate's Court, Dean was found guilty of murdering Dorothy Carter and sentenced to death.

The Otago Daily Times covered her execution after she was led from her cell on August 12, 1895.

"I was struck, as I always was in court during her trial, with her dignified carriage and bearing - head erect (uncovered, of course), thin, fine, iron-grey hair, nicely brushed, neatly parted in the middle, and fastened in a knot behind," the ODT reporter wrote.

"She walked straight on without a halt to the drop-door, gave a scrutinising glance, first at the gallows and its belongings, then at the half dozen people standing below, a contemptuous, loathing look at the hangman, and placed herself in a position to facilitate his work as much as possible, and took a few long breaths while he was adjusting the rope and placing the white calico cap over her head and face.

" The sheriff then asked her if she had anything to say, to which she replied, 'I have nothing to say, except that I am innocent'. She began to sway backward and forward a little, and was heard to say under the cap by those who were standing close beside her, 'Oh, God, let me not suffer!' At two minutes past 8 the bolt was drawn, and the body dropped a distance of 7ft 9in out of sight."

Dunedin writer Lynley Hood, who wrote Minnie Dean - Her Life and Crimes in 1994, has described her as "the New Zealand equivalent of the witch in Hansel and Gretel".

A 1973 book by J. O. P. Watt, The Trial of Minnie Dean, describes her equally unflatteringly as "a female Jekyll-Hyde".

Certainly, she became the stuff of legends, and nightmares, in Southland.

For many years, Southland children who misbehaved were threatened with being sent to Minnie Dean.

A Southland wildflower was named "Minnie Dean", as locals believe it should be torn out and burnt if it appears in the garden. It is the same flower that was found growing over the three young bodies at "The Larches".

"I don't think she was evil, but she was probably negligent. I think children died in her care; that's a certainty. But whether it was murder . . . you would have to have motive and intent and I don't think that's the case," he says.

"There are a lot of myths about Minnie Dean. They said that nothing would grow over her grave, but that was because the guys looking after it were putting weedkiller on it. If you look at the grave now, there's good old green Southland grass growing there," he chuckles.

"They also said she was buried eight feet down to prevent vandalism, but that was the custom then. When her husband, Charles, later died in a fire in 1908 he was buried on top of her," Boyle says.

"People still come by the busload to see the grave. It's in all the tourist books."