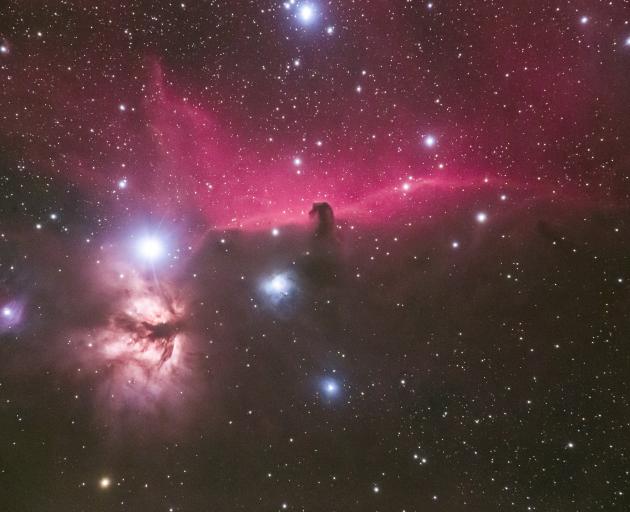 The Horsehead Nebula. Photo: Fraser Gunn
Visitors are coming in their tens of thousands each year, from around the world, to gaze at New Zealand’s spectacular night sky. We need to do more to protect our dark sky and reconnect with our place in the universe, writer and stargazing enthusiast Naomi Arnold tells Bruce Munro.

"I really, really like Corona Australis, the Southern Crown.

"It's such a pretty little shape - a horseshoe or an oval pattern - it's quite delicate."

Author Naomi Arnold is talking about her favourite feature in the Southern night sky.

"I just like the shape of it. It's just under Sagittarius and off the tail of Scorpio.

"You can see it on a good, dark night. I just like looking at it."

Two and a-half years ago the journalist and natural history writer did not know much at all about astronomy. Now she carries a pair of binoculars around in the car, has bought a 12-inch telescope and reckons we all need to step out into the darkness and look up. 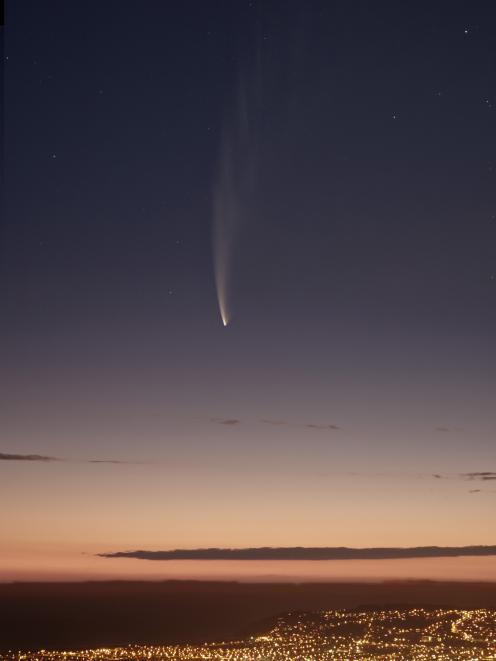 Comet McNaught over Dunedin. Photo: Stephen Voss
On top of that, she has written a book, Southern Nights. It is about what was, is and can become special about our southern hemisphere night sky. Arnold and other night sky aficionados argue New Zealand's heavens are beginning to get the attention they deserve but that we need a truly dark sky to make the most of what could become an astro-tourism supernova.

"Things like the Big Dipper, the North Star, the moon being around the wrong way ... It's actually quite different down here. And there are a few really cool objects that you don't get to see in the northern hemisphere at all."

She rattles off a list of distinctive night-sky objects visible only in our part of the world.

There are the the Magellanic Clouds - two dwarf galaxies orbiting the Milky Way.

"If you go out on a really dark night you can see these two glowing cloud shapes just below the Milky Way. They're actually these two galaxies. They're a favourite thing to photograph for northern hemisphere astronomers coming down here."

From the south you can also see the star system closest to earth, Alpha and Beta Centauri.

"They're about 4.7 light years away - quite close relatively speaking."

Then there is New Zealand's favourite constellation, the Southern Cross.

"And in the Southern Cross there is a really pretty little cluster called the Jewel Box cluster, which is some blueish stars set around a reddish star."

The list, Arnold adds, would not be complete without mentioning a stunning globular cluster called Omega Centauri.

"It was one of the first ones I saw through a telescope and it just blew me away.

"It is the brightest star cluster you can see from anywhere on the planet.

"It just completely took my breath away. You look up at the sky and it's just a little white dot. Then you look through a telescope and it explodes into, like, a city [of light]."

Arnold is a journalist based in Nelson. Her previous three books had nothing to do with astronomy.

"There was one on the World of Wearable Art, ... I wrote one on the history of the Nelson-Tasman hospice ... and I edited a collection of essays on anxiety called Headlands."

Southern Nights began as a suggestion by Arnold's publisher at HarperCollins. Because Arnold has done some science writing she was asked to consider the project.

"I said, sure. I didn't know much more about astronomy than the average person.

"I spent two and a-half years researching it. I was just really fascinated. It took a hell of a long time."

The book explores what is special about our southern skies, explains the cultural and practical importance of the major stars in Polynesian and Maori history, traces the development of astronomy in New Zealand and argues for dark-sky conservation.

Arnold says she enjoys working on stories about human connections with the natural world. This project offered plenty of scope to delve into that.

"I really loved learning about Polynesian and Maori celestial navigation and tatai arorangi, which is the Maori study of the stars.

"It took such incredible skill and memory to cross the Pacific ... the stars were part of their direction-finding mechanisms."

Historically, New Zealanders have been responsible for some significant achievements in astronomy, Arnold says. 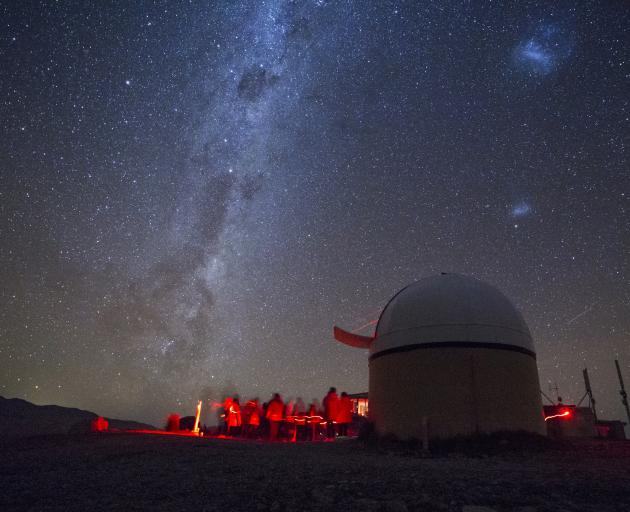 A stargazing tour at the Mt John Observatory, Mackenzie Basin. Photo: Maki Yanagimachi
Albert Jones, OBE, who died in 2013, was a New Zealand amateur astronomer. He was the first person worldwide to list observations of more than half a million variable stars - whose brightness varies - which he did using a homemade telescope.

"He also co-discovered Supernova 1987A, in the large Magellanic Cloud. That was our closest exploding star in 400 years . . . It was a huge achievement. And he was just a humble guy who worked out of his backyard in Stoke, Nelson."

Another key figure was Frank Bateson, OBE, who choose the site for New Zealand's main astronomical research observatory, the Mount John Observatory, in the Mackenzie Basin.

"He basically went on an epic road trip around the country, with his wife, Doris, looking for good places to establish the observatory. Because you want, preferably, a mountain top with settled atmospheric conditions . . . and, of course, a long way from natural light."

The observatory was established in 1965, with Bateson as its lead astronomer.

Someone else who has spent a lot of time at the Mt John Observatory is Emeritus Professor John Hearnshaw. He was director of the observatory and professor of astronomy at the University of Canterbury until he retired in 2014.

This week, Prof Hearnshaw was speaking at the New Zealand Starlight Conference, at Tekapo. The conference theme was, "Towards a dark sky nation".

About 120 delegates from 17 countries attended the conference to talk about light pollution and the benefits of getting international accreditation as a dark sky nation.

Prof Hearnshaw says there are important and compelling reasons for New Zealand to protect and extend its areas of light pollution-free night sky including, but also beyond, the fact that "most of the really spectacular and bright objects in the whole sky are actually in the South".

Astro-tourism is a rapidly growing market, of which New Zealand could be taking full advantage, he says.

Already the country has three dark sky areas - in Mackenzie district, on Great Barrier Island and on Ruapuke/Stewart Island.

"New Zealand is a leader in this movement. If we had 15 or so communities with lighting ordinances to protect the dark sky then that would send a signal around the world that New Zealand is the place to be if you want to admire the stars."

The Mackenzie Basin gets about 150,000 astro-tourists each year, mostly from overseas.

"That's hundreds every day. Since we created our dark sky reserve in 2012, there's probably been a million visitors, particularly from China, Japan and Korea.

"Dark-sky tourism in the Mackenzie is now one of New Zealand's biggest tourism attractions."

Astro-tourism encourages people to stay longer, because they cannot see all the sights during daylight hours.

"If you look at the bed nights in the Mackenzie ... it's about one million bed nights a year.

"So big is the impact that Tekapo can hardly cope. Two new hotels are about to be built."

"If you have light at night and you are trying to sleep ... then hormone production in the human body is totally disrupted." 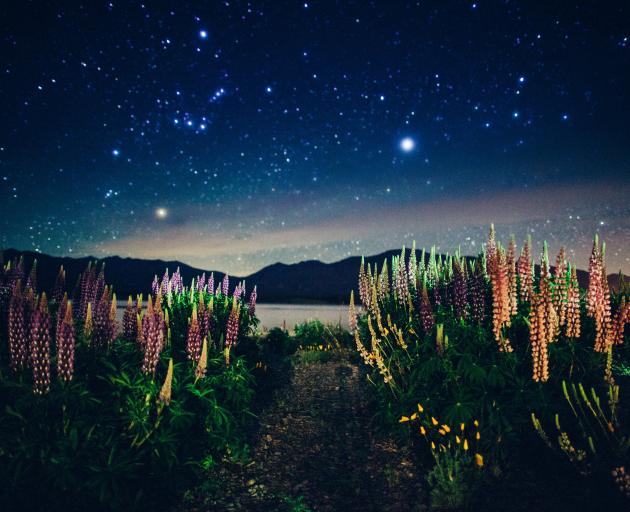 The Constellation of Orion appears above lupins on the shores of Lake Tekapo. Photo: Maki Yanagimachi
There are hormones that are produced only at night in darkness. The most significant is melatonin.

"If melatonin is not produced in the body then you get symptoms of stress.

"And melatonin helps fight some cancers, breast and prostate in particular.

Prof Hearnshaw reviewed a manuscript of Southern Nights for Arnold.

"It was a good read. It's a popular book - nothing technical.

"It's a good book for someone who doesn't know anything about astronomy and wants to look at the sky and to know what there is to view."

The medical doctor, who splits his time between Dunedin and Invercargill, says light pollution is "an ever-present threat to our pristine night skies".

"Preventing light pollution is not about turning off all the lights, but simply ensuring that we light the ground and not the sky," Dr Voss says.

He is aware of the issue because he has been a keen amateur astro-photographer for more than 25 years. Photographs by Dr Voss have been published in a variety of books, calendars and popular science magazines. Along with other astro-photographers, his images appear in Southern Nights.

The key to stellar photography, he says, is light.

"For most types of astrophotography light is not in abundance. So, it's important to find a way way of collecting as much light as efficiently as possible ... and ultimately convert a dark and dimly lit scene into a brightly lit vista."

Arnold says researching and writing Southern Nights has added 12 hours to her appreciation of every day.

"I like just going out at night ... and looking up, spending a bit of time to see what I can see."

It is something she believes we all need to reconnect with.

"We are bathed in light from the moment we wake up until we turn out the light and go to sleep. We don't spend a lot of time in darkness like we used to.

"There's a great quote ... `When indoor plumbing arrived, we lost our connection to the night sky'."

Getting away from city lights and screens, giving your eyes half an hour to adjust to the darkness and then looking up can be a wonderful experience, she says.

"It's truly beautiful. If you don't see it normally, you are really shocked at what is actually up there.

"And it also reminds us we are on a rocky planet spinning towards oblivion. It creates a sense ... that nothing really matters that much.

"To look into the Milky Way and think we are looking into the centre of our galaxy is just mind-blowing."

- Southern Nights: The story of New Zealand's night sky from the southern lights to the Milky Way, by Naomi Arnold, is published by HarperCollins.