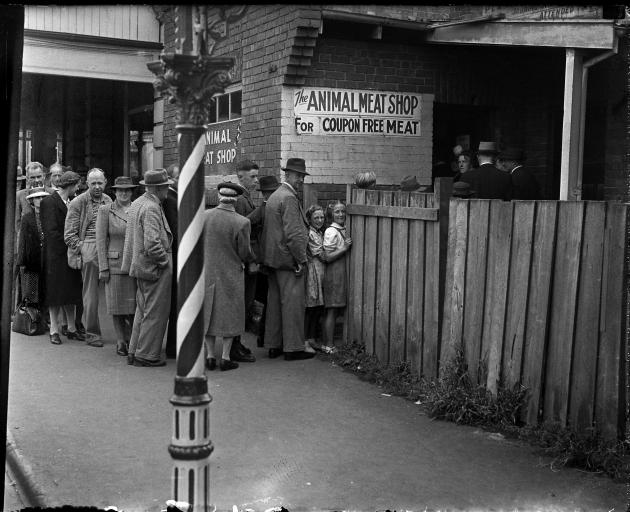 A queue at The Animal Meat Shop in the 1940s in Dunedin, thought to be on the north side of Frederick St near the intersection with Great King St (now part of the dental school) Photo: Evening Star

Cooking during lockdown often tested our ability to improvise, writes Alice Taylor. But it's not the first time people have had to do that.

First the flour disappeared from my favourite supermarket aisle. I realised I had been taking it for granted. To make matters worse, there was no yeast to combine with my non-existent flour to make the loaves of bread that everyone appeared to be making on social media.

By the following week not only had neither of these ingredients come back in stock but baking powder had also vanished from the shelves. In the flourless state that I was, I recalled the days when I had flour but expressed no affection or care for it. It reached such a point of desperation that I would be waiting on supermarket websites, refreshing search results for flour.

Lockdown meant home cooking and provided extra time to spend in the kitchen. But panic buying of non-perishable foods ensured creativity was called for as we were spurred on by our cravings to bake but limited by the ingredients we couldn't find.

It is not the first time momentous events have changed the way we cooked. Food rationing imposed by the Government during World War 2 posed significant challenges for home cooks.

New Zealand introduced food rationing in 1942 to create a surplus that could be used to feed the people of Britain. In a 1946 article The Alexandra Herald and Central Otago Gazette reflected that in Britain parents "live for the day when children will eat as well as our children in New Zealand". Therefore we "are asked to build up Britain’s food stocks".

Constraints were placed on several products to accommodate British needs. In 1940, 90% of all exports were being sent to the United Kingdom.

Rationing was introduced at the beginning of the war. The first ration books specifically for food were released in 1942. When a purchase was made, a coupon was removed from the ration book. What was rationed and the quantity rationed changed overtime. By 1945, tea, sugar, butter, and meat had been rationed. 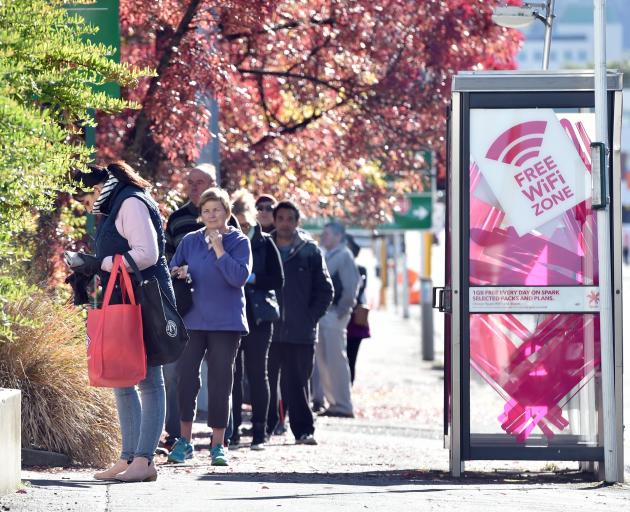 Shoppers queue oustide Countdown Central to do their food shop during the Coronavirus lockdown on Wednesday. Photo: Peter McIntosh
Sugar was rationed to 24 tablespoons per week from 1942. This was more than in some other countries, and Kiwis were allowed more sugar for jam making or preserving. Still, substitute sweeteners were used, often unsuccessfully. Golden syrup was a popular choice.

Tea was also rationed. Advertising centred around making the most for your buck. An advertisement in the Otago Daily Times, for Amber Tips, promised that "quality counts: you use less tea and the flavour lingers longer".

Butter was rationed, and margarine and olive oil weren’t available. This created enormous challenges. Nancy Taylor writes in her book, The Home Front, that "with unlimited butter at ls 6d a pound, many women were used to ‘slapping a bit of butter into almost everything’." Now however, they "had to practise restraint, saving to make their soldiers' cakes and family treats".

Butter rationing caused much frustration. One annoyed mother wrote "If it [butter rationing] is a necessity, it jolly well shouldn't be!" "By the time their school lunches are cut there is nothing at all for breakfast and tea. It is bad enough to be without or very short of sultanas, bananas, raisins, baked beans, dates, honey and eggs for school lunches, but without butter, too, it is a bit too much."

Many cooked with suet, beef dripping or lard. Taylor writes "The virtues of good dripping and of cod fat, supplied by the butcher and rendered down in the oven, became widely known."

Or the butter ration was stretched by using warm milk to work into butter. Alternatively, gelatine was dissolved in milk and then beaten into the butter, which made it go further.

Cookbooks also reshaped recipes to suit the times. Self-Help Wartime Cooking Suggestions listed its desserts in two categories: "no butter, no eggs, or ‘one oz. butter, one egg’".

Their cookbook claimed to offer recipes that will "knock your husband's eye out". "Men like variety. They want food that is tempting and different. You cannot afford to trifle with your husband's appetite – you can’t afford to risk ‘ration routine’."

Rising agents were rationed and affected cooking. Cream of Tatar disappeared. Phosphate baking powders were used as replacements. They had a different aeration process that needed getting used to.

Creativity was needed. Often odds and sods were combined in fritters, mac and cheese and fried rice. Ingredients were also often curried to bulk out standard ingredients. Omelettes filled with left overs were common.

The recent lockdown encouraged a return to baking and home-cooked meals, evidence of which was provided by a spike in online searches for recipes between April 12 and 18.

Benches have been floured, yeast risen, and ovens flung open.  Many have bravely ventured into the world of bread making. Some have gone for no-knead breads, others have made sourdough from their very own starter – a daunting task.

Panic buying of flour has forced us to be creative.

Fortunately, there are great recipes out there that don’t use flour or yeast. Just as they did in World War 2, food writers adapted their recipes to the changing environment.

For those with flour but no yeast, Chelsea Winter’s soda bread is a go too. Nigella Lawson has a wonderful recipe for a flourless chocolate cloud cake on her website. Another favourtite of mine, tiramisu, is good for those short on flour.

1 packet (250g) savoiardi biscuits, otherwise known as sponge fingers
1 1/4 cup strong coffee, cooled - you can use instant coffee here
½ cup plus 2 Tbsp baileys cream liquor
2 free range organic eggs, separated
a pinch of salt
50g castor sugar
300 mascarpone cheese
cocoa powder, for dusting
chocolate, shaved
In a bowl, whisk together the egg whites and a pinch of salt with an electric beater until soft peaks begin to form. Set aside.
In another bowl, whisk together the sugar and egg yolks with an electric beater until thick and pale in colour, around 5 minutes. Fold in mascarpone. Lastly, fold in the egg white gently until just combined.
Combine the cooled coffee and baileys cream liquor and a bowl. Take a sponge finger and dip into the coffee and liquor for a couple if seconds until the surface is damp but not soggy. Place into your chosen dish and repeat with the sponge fingers until you have one even layer.
Continue layering, for two or three layers, depending on the size of the dish, alternating with the mascarpone mixture.
Dust the top with cocoa and shaved chocolate

This is a recipe passed down from my mum and it is too good to not share.

In a small saucepan, gently melt butter and sugar. Remove from the heat.
Crush the wine biscuits into a rubble. I find it is easiest to put the biscuits in a ziplock bag and use a rolling pin to break them up. You want some pieces to be smaller than others, but nothing too fine.
Whisk the egg into the butter and sugar. Stir in sifted cocoa with a wooden spoon, then the wine biscuits.
Press the mixture firmly into a rectangular brownie tin, smoothing the top with the back of a wooden spoon, and refrigerate for at least 3 hours, until fully set.
Cut into squares, and store in an airtight container in the refrigerator.

Fortunately we have our humble take-out back, but for those still wishing to make takeaways at home, here is a recipe of mine for chicken pad thai.

Cook rice noodles so they are almost cooked, a few minutes shy of the cooking instructions. Drain and run under cool water until completely cold. Set aside.
In a hot pan over high heat, scramble your eggs, and break up with a spoon or chop with a knife. Remove from pan and set aside.
In the same pan, stir fry onion, spring onion and garlic until slightly softened. Add chicken and stir fry until the chicken is cooked.
Add the cold rice noodles and Watties Pad Thai sauce and stir fry for a couple of minutes.
Take off the heat. Stir through most of the mung beans.
Sprinkle over the rest of the mung beans and peanuts. Squeeze over lemon to serve.

Many of us might have accumulated one too many cans of beans during a frantic supermarket shop.

Here are a few ideas to use them up:

Combine canned chickpeas with tahini, garlic, lemon and cumin to make a hummus.
Or make a simple green curry with green curry paste, coconut milk, chickpeas and the vegetables of your choice.
If you have one too many cans of chilli beans you can make nachos. Simmer the beans with a fried onion, tinned tomatoes, and paprika and serve with corn chips. Top with cheese, tomato salsa, sour cream and guacamole.

- Alice Taylor is a University of Otago humanities intern at the Otago Daily Times.