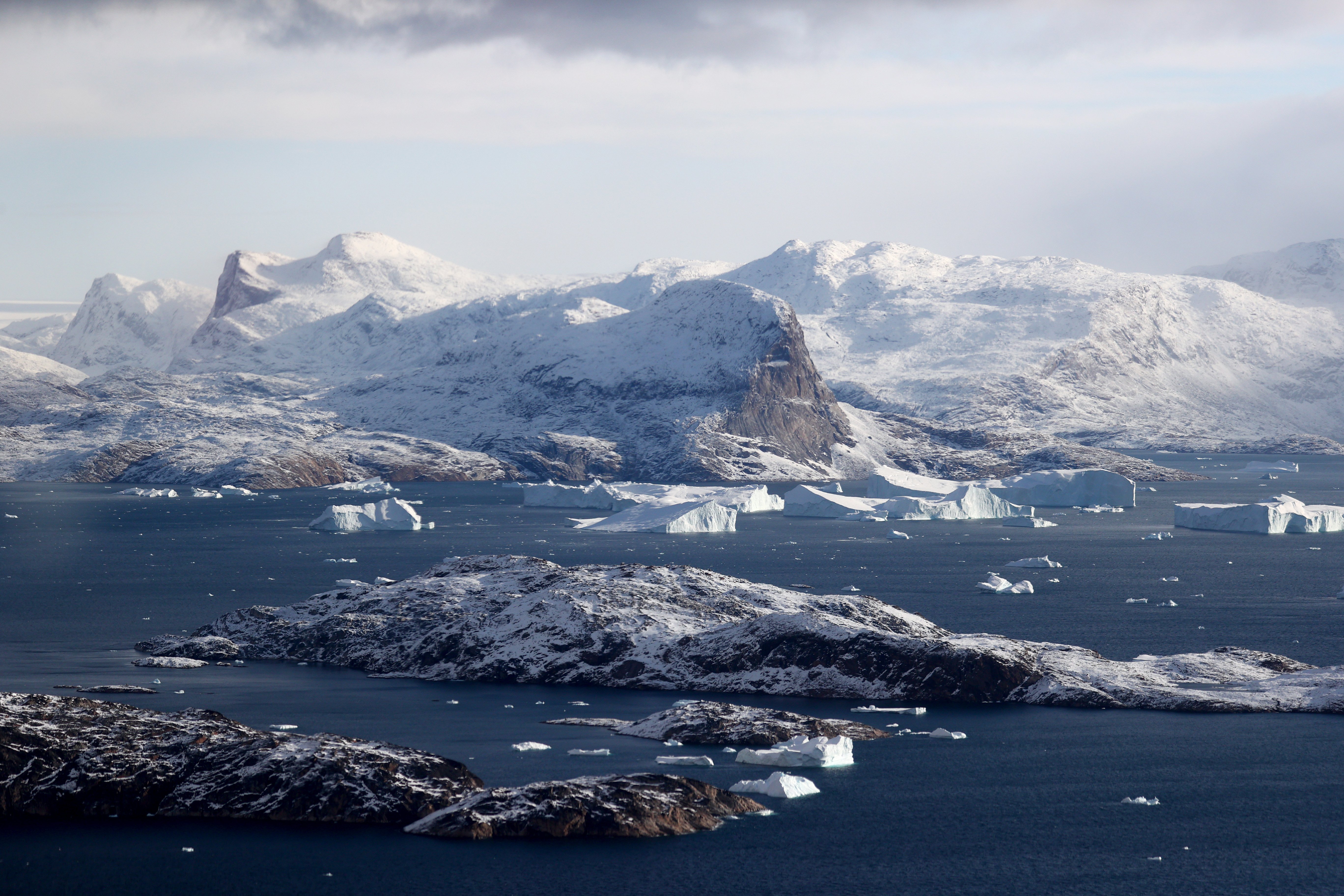 Icebergs seen from Nasa’s Oceans Melting Greenland (OMG) research aircraft this week, near Upernavik, Greenland. The OMG campaign is wrapping up a six-year mission studying the ocean and glaciers along Greenland’s coast. Each summer, OMG releases about 250 ocean probes to monitor the temperature and salinity of waters around Greenland. Greenland’s ice sheet holds enough water to raise sea levels by about 7.5m worldwide. PHOTO: GETTY IMAGES
The great ice sheets will continue to melt, unless we change, writes Inga Smith.

Most people will have heard that melting ice leads to sea-level rise, and that this is an increasing concern in our warming world. What many people do not realise is that melting sea ice does not directly change sea level. The reason for this is that sea ice forms from water in the ocean already.

This is different from ice originating on the land, such as the Greenland ice sheet, and the West and East Antarctic ice sheets. Those ice sheets are giant glaciers made of compacted snow. When land-based ice melts and flows into the sea, the meltwater raises sea level. Similarly, if ice slides from the land and floats in the sea as an ice shelf, this will raise sea level. An iceberg calving directly from a land-based glacier or ice sheet to the sea will also raise sea level, although an iceberg calving from an already floating ice shelf will not.

It is the ice entering the sea from the land that raises sea level, not the melting of ice that is already in the ocean. When an iceberg later melts, that melting will not change sea level. You can try this at home by adding an ice cube to a glass of water: mark the level of the water before adding the ice cube, then add the ice cube and mark the new, higher level of the water. If you then leave the ice cube to melt, you should not be able to see any noticeable change in the water level.

The recent Intergovernmental Panel on Climate Change (IPCC) ‘‘Sixth Assessment Report Climate Change 2021: The Physical Science Basis’’ reported that 20% of sea-level rise between 1971 and 2018 was due to ice sheets melting, with the rest from glaciers melting (22%), land water storage (8%), and thermal expansion (i.e., hotter water expanding, 50%). Worryingly, the IPCC reported that that rate of ice sheet loss increased four-fold between the periods 1992-1999 and 2010-2019, and that for the 2006-2018 period ice sheets and glaciers melting combined to exceed sea-level rise from all other sources added together.

The IPCC reports that global mean sea level could rise by about 0.8 metres by 2100, and more than 1.3 metres by 2150 if the world does not reduce greenhouse gas emissions significantly. Those figures are global averages; sea-level rise values will not be the same everywhere.

Local sea-level rise values depend on many complex factors, such as the distance from where the melting is occurring; somewhat counterintuitively, initially there are larger effects further from where large ice sheets melt. This means that New Zealand and other Pacific Island nations experience larger sea-level effects from the Greenland ice sheet melting initially than countries that are geographically closer to Greenland.

Local land subsidence is also a factor that is important in many New Zealand locations.

Researchers at the University of Otago are contributing to national and global efforts to provide information to the public and policymakers on planning for sea-level rise.

So what efforts are under way to reduce global greenhouse gas emissions and therefore limit future sea-level rise?

Somehow, in the middle of the Covid-19 pandemic, the 26th United Nations Climate Change Conference of the Parties (COP26) is supposed to take place in Glasgow, Scotland between October 31 and November 12. COP26’s moto is ‘‘Uniting the world to tackle climate change’’, and a primary goal is to ‘‘Secure global net zero by mid-century and keep 1.5 degrees within reach’’.

This goal is to be met through finalising the rules that will make the Paris Agreement operational. To that end, more than 190 countries have been asked for nationally determined greenhouse gas emissions reductions targets for the year 2030 that are consistent with obtaining global ‘‘net zero’’ emissions by 2050.

The organisers expect 10,000 people at any one time at the venue, and up to 25,000 people participating during the two weeks of COP26. We can only hope that the carbon impact and Covid-19 health risk of holding COP26 in-person leads to a step-change reduction in global greenhouse gas emissions.

- Dr Inga Smith is the co-director of He Kaupapa Hononga: Otago’s Climate Change Research Network and is based in the Department of Physics at the University of Otago.

Basking in an untapped flow