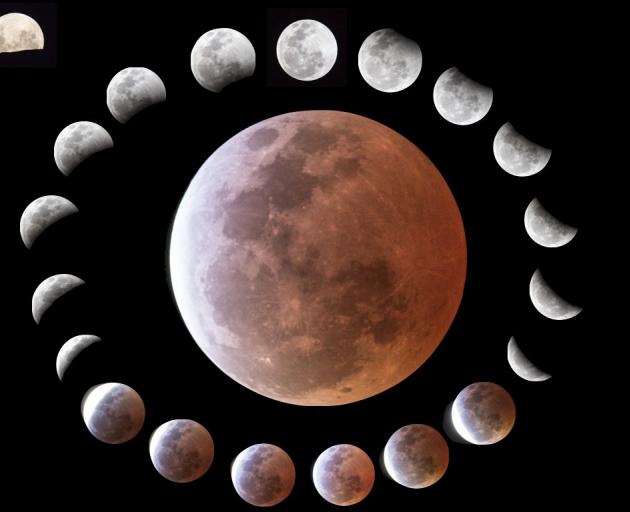 Photo: File
In a week when New Zealand celebrates the launch of ''Humanity Star'', a flashing satellite seeking to inspire stargazers across the earth, I am hopeful that a distinctly less sparkling, entirely natural celestial alignment might encourage readers to stay up late.

I am referring to tonight's total lunar eclipse, which, weather permitting, will be very beautiful.

Last week, I billed tonight as a trifecta of eclipse, supermoon and blue moon. I was wrong. Because full moon occurs at 2.28am tomorrow (Thursday, February 1) here in New Zealand this particular moon isn't the second full moon in January, and isn't a blue moon at all. Therefore Kiwi stargazers get to witness only a duet of eclipse and supermoon (tonight's moon is 6.8% larger than average).

Things kick off at 11.50pm when the penumbra, the lighter part of Earth's shadow, starts to darken the moon. It probably won't be until 12.48am when Earth's dark shadow, or umbra, first appears that any darkening becomes visible to the naked eye. It should first be visible in the 4 o'clock position on the lunar limb.

Over the next 60 minutes more of the Earth's shadow slowly envelops the moon, until at 1.51am, our closest celestial neighbour is entirely in shadow. How dark the eclipse will be depends on how much light passes through the earth's atmosphere.

Previously, when there has been extensive volcanic activity on Earth, eclipses tend to be darker. Since there has not been much volcanism recently, tonight's eclipse may not be very dark, but it will be interesting to see what happens.

Totality ends at 3.08am. Over the following 63 minutes the moon will slowly regain its usual brightness as Earth's dark shadow clears away. By 4.11am the last part of the umbra will depart the moon. The eclipse finally ends at 5.08am, when the last vestiges of the Earth's penumbra disappear.

The best way to see the eclipse is to wrap up warm in a comfortable deck-chair. The entire eclipse will be visible with the naked eye, but a good pair of binoculars will enhance the view. Enjoy the show!