As a new academic year begins, Pearl Matahiki reflects on 20 years as head and heart of the university’s support for Maori students. On the eve of retiring, she talks to Bruce Munro about students she has known, celebrating success in an alien environment and important changes still to come.

Many are wide-eyed, drinking in new sights on their first day in Dunedin as the curtains rise on their university years.

A good number of them will find their way into the converted and expanded wooden villa where Pearl has been, until yesterday, tumuaki, manager, of the Maori Centre Te Huka Matauraka, a base of support for the University of Otago’s Maori students. 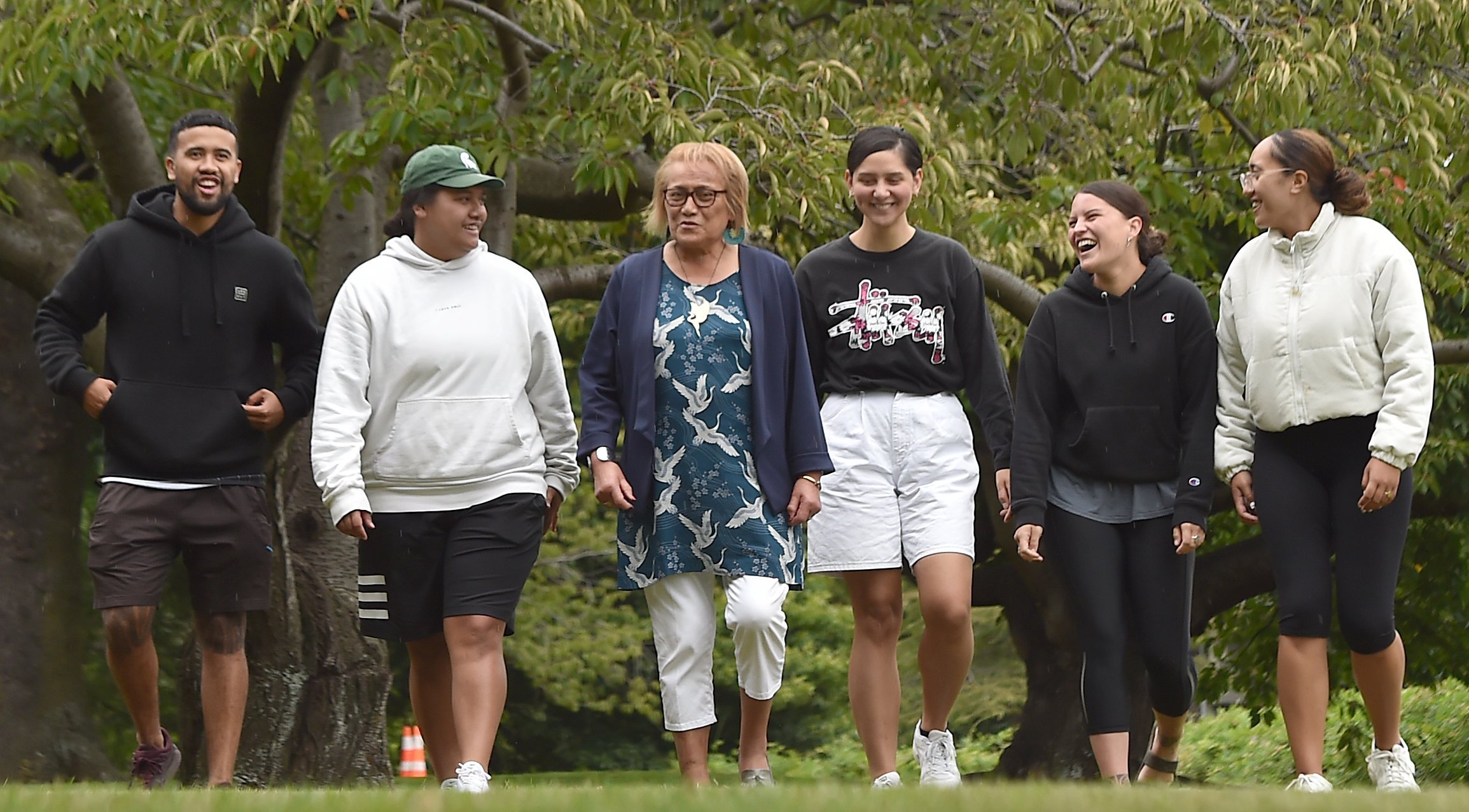 Here, she and the team of Maori Centre staff encounter these excited, bewildered and sometimes homesick students.

"Our university is totally different from others in New Zealand — it is very white," Pearl says matter-of-factly.

"The students say, ‘It’s like we’ve gone to another country’.

"We have a bit of a laugh and tell them,‘Well, you have come to a different island. But after three years, you’re going to love it’."

They are some of the more than 2300 Maori students studying at the University of Otago. About 450 of whom are "freshers", mostly from "up north", on their first visit to the town that will be home for the next few years.

More than 20 years later, she is poised to return to her beloved Tokomaru Bay, on the North Island’s East Cape. But this past, last week, while still in the role of tumuaki, she has continued to be busy with what this place is all about, the university’s indigenous students.

"It’s all about them. It’s not about us," Pearl says emphatically.

"It’s about what they want, what they need, to survive, to become independent and to thrive."

Well-being has been the bedrock of that student-focused approach.

Pearl wanted the Maori Centre to be a place where Maori students felt safe to be Maori and could connect with others who could help them on their journey.

"For many of them, they are not only away from home but away from their whole whanau. That can be quite an experience."

She has first hand experience of what that feels like. In the early-1990s, after 14 years spent overseas, mostly in Bougainville, Papua New Guinea, Pearl enrolled as a mature student at the University of Otago.

"That first day was unreal." 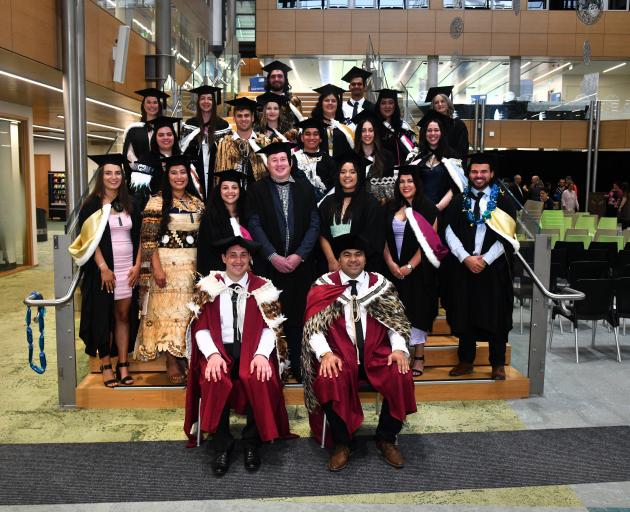 University of Otago graduates who took part in Te Heika Pounamu 2019, the university’s graduation event for Maori students and their whanau, established by the late Dr Godfrey Pohatu, previous head of Te Tumu, in the 1990s. PHOTO: SUPPLIED
She remembers standing in long enrolment queues snaking across the campus and recalls being approached by young people asking if she was Maori.

"I said, ‘why are you asking?’. Later, I found out they were Maori Student Association members who were trying to identify and support Maori students on campus."

After completing a Maori Studies degree, Pearl worked as a research assistant before being asked by the university, in 1998, to become part-time co-ordinator at the Maori Centre.

Three years later, after a scathing Treaty of Waitangi audit of the university by the late Dr Ranginui Walker, the role of Maori Centre tumuaki was established, along with other changes at the university.

The health and well-being of Maori students was her, and the centre’s, main focus from the beginning.

"It’s more of a focus across the whole university now, but we couldn’t understand why it wasn’t already," she says.

One of the initiatives the Maori Centre instigated, at the behest of a student, was exam-time breakfasts. This was several years before the Otago University Students Association started something similar.

"We had some male students who were always hungry and one in particular who was a hoha, he kept pestering me. He demanded we set up breakfasts for students," Pearl recalls.

So, with funding from the Maori Women’s Welfare League, the Maori Studies department, the university’s Maori Students Association and some private, non-Maori benefactors, a series of gold coin donation breakfasts began.

It began as a continental breakfast but later became "a full-on breakfast with bacon and hash browns" cooked by senior students.

Not only were the students getting energy for study, but the younger students were interacting with the older ones and getting some valuable study tips.

"People say feed your mind, but you’ve got to feed your puku too ... It really worked. We compared their marks."

The student who agitated for the breakfasts is a case in point.

"He did well in his studies. This guy became a surveyor and ended up redesigning a mining town in northern Australia."

If Pearl’s work, as head of the Maori Centre team, has been for the well-being of students, it has equally been for their success.

Success is measured in many ways, she says.

Academic success is important, and the growing number of Maori graduates with doctorates is encouraging, but other successes are needed along the road to graduation.

She sees an important dual role for the centre is helping some Maori students become comfortable and proud of their identity and helping others, who are already immersed in te ao Maori, the Maori world, and competent in te reo Maori, to become comfortable in the Pakeha-oriented world of tertiary education.

"I think of each of them as a sparkler. Bring them all together and they become this massive dynamo."

During the past 20 years, there have been plenty of changes that are helping Maori students achieve their goals, Pearl says.

Her own role, as well as the positions of Maori counsellor and Maori community liaison officer, all came from Dr Walker’s Treaty audit wake-up call. Other positive gains have included associate dean Maori roles in each university division, establishment of the Maori Development Office, an increasing number of Maori professors in a variety of disciplines and bilingual signage across the campus.

Not so positive, Pearl says, was last year’s call to do away with equity quotas for Maori, Pacific and rural students being trained as doctors.

"Ensuring we will have enough Maori and Pacific Island and rural health professionals in proportion to their numbers in wider society, it won’t happen for another 50 to 70 years.

"I wasn’t impressed. I felt for our students, for all students."

The mooted changes did not happen.

One measure of success is the growing number of students opting to take part in parallel, Te Heika Pounamu, Maori graduation ceremonies.

"Maori graduation is not only the student’s success, it’s a celebration of their whanau’s success as well."

In the early days, Te Heika Pounamu was held in the former church on Dundas St. The year Pearl started at the Maori Centre, poet laureate Hone Tuwhare attended the event there when he was given an honorary doctorate in literature by the university. In the centre’s glass display cases, among photographs of graduates and gifts given by them, is a photo of Tuwhare with young graduates Rachel Potae and Craig Campbell. 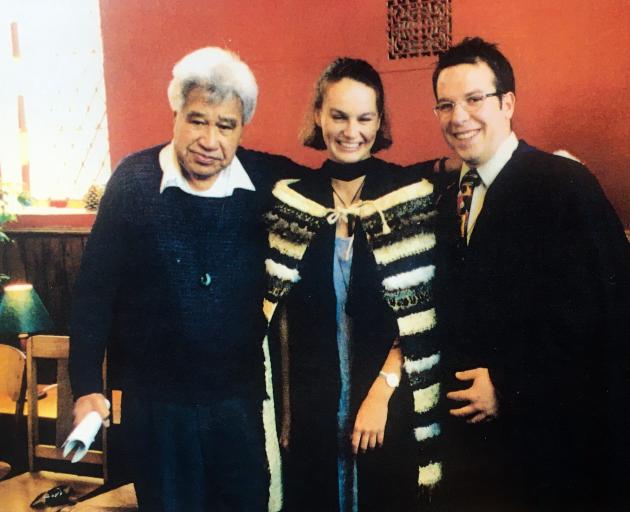 Poet Laureate, Hone Tuwhare, (left) with University of Otago graduates Rachel Potae and Craig Campbell at the 1998 Maori student graduation, Te Heika Pounamu. PHOTO: SUPPLIED
"All the parents in the audience wanted their graduating children to get their photos taken with Hone," Pearl says.

"But the students didn’t know who he was. They know now. It was quite funny."

Potae, photographed wrapped in her whanau korowai, is now an obstetrician and gynaecologist. Campbell, who several years later would be awarded a New Zealand Special Services Medal for deployment to Thailand following the 2004 Boxing Day Tsunami, is now a forensic ondontologist.

Te Heika Pounamu has regularly outgrown its venues. It now attracts several hundred people and is held in the university’s Commerce Building.

"How do I feel about our Maori students? When I see them, I just know there is a bright future for the next generation."

Well-being and success. The third strand has been the contribution Maori students can make at the university and beyond.

Manakitanga, generosity and care, was a value instilled in Pearl by extended whanau in the small, beautiful, seaside township north of Gisborne where she was raised, one of the younger of nine siblings.

Pearl lived there until she was 17, when she joined the air force.

Among Maori students on campus, she is proud of the way that ethos is nurtured by the likes of the peer-to-peer mentoring co-ordinated by Ken Tipene.

"Our mentoring programme has been so good. And it now has an explicit leadership training component.

The programme has been running for about 18 years and continues to produce fruit.

"I’ve just received beautiful cards from three students — they are now a neurologist, an accountant and a teacher — who were student mentors. They graduated 10 years ago and they said they still keep in touch with their mentees."

Pearl says she has been helped enormously in her role by whanau, trusted advisers and fellow Maori Centre staff.

The cumulative effect has been a centre that is a successful model of indigenous student support.

But it needs to continue to be resourced. Other universities considering setting up similar centres also need to be prepared to properly resource them if they want similar results, she cautions.

Pearl has further parting words of advice; for a university she loves and which she says is aware of te ao Maori but is sometimes slow to make needed changes.

"Universities need to make changes for students coming from whare kura. We do the same for international students and for rainbow students. Why can’t they do that for indigenous students from Aotearoa?"

For example, she would like to see the role of kaiako established at the Maori Centre; to provide academic support in te reo Maori to students whose first language is te reo Maori. This would enable students to undertake their assignments in te reo across all disciplines.

"Te reo Maori is an official language of Aotearoa."

A further suggestion pertains not only to Maori students.

"A lot of the young people walking around this campus already have had leadership roles and I don’t think we nurture that enough."

Pearl’s official farewell was a fortnight ago. Her replacement will be formally announced early next month. Within a month, Pearl will simply be one more Tokomaru Bay returnee.

"I’m just going to chill. I won’t do much. I won’t be joining committees. I’d just like to help our mokopuna into higher education."

The farewell was a special celebration, attended by staff, current students, past alumni and a sizeable contingent of Pearl’s whanau.

"My family, here and overseas, have asked me how I feel. I feel good about the centre’s future. I will miss the people, but definitely not the weather.

"I feel fortunate that I’ve met so many young people who are now in amazing positions throughout New Zealand and globally. And the Maori Centre helped nurture that."

A great woman with a big heart. She has so well served the students and the University.