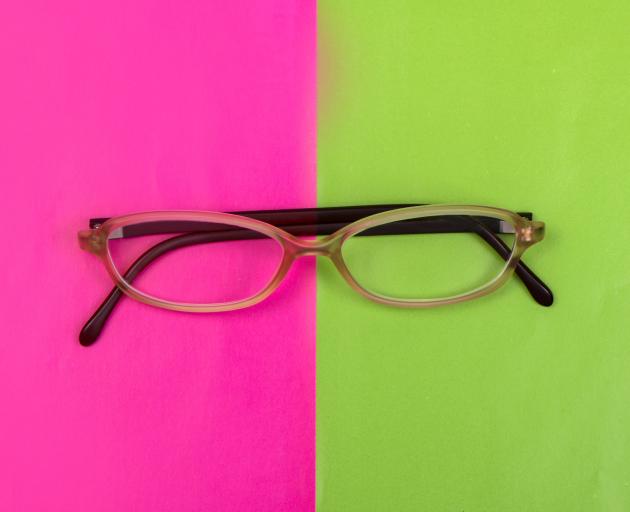 Photo: Getty Images
I always wanted to wear glasses, growing up. I felt it would mark me out as the intelligent being I would one day blossom into, writes Liz Breslin. More, I thought them a little risque - a magnet for bullies and fascists, and a statement that books and reading were more important than both. I was obviously ahead of the fashion curve that considers face-gear to be a sexy additional extra. I had the teeth-braces down and dialled for four years, but my eyesight was annoyingly excellent, despite years of actual torchlight undercover reading.

It is a truth universally acknowledged that a pair of glasses leads an onlooker to suppose that you are smart and trustworthy (unless said onlooker is a small child. Small children are only of the opinion that people who don't wear glasses are prettier and better looking than people who do, according to research by the British Psychological Society. The Laura Lovely*-Clark Kent effect.) Defence lawyers recommend specs to their clients for a more favourable outcome on their day in court but that in itself cannot account for the rising number of people who wear ocular accessories on an unnecessary basis.

I never did it, your honour. Never once did I decorate my face with a semi-reflective unprotective framing device.

It was mid-2017, I think, that I joined the 90 million Nigerians and the 95% of 19-year-old men in Seoul who are more than a bit myopic. The words started getting smaller and fuzzy round the edges. Headaches. Sore eyes. But the tests are expensive. Then, when it was one of those half-price eye-check months, I found myself sitting in a series of tiny dark rooms, staring at pin pricks and trying not to close my eyes against concentrated vents of windpuff. They got me to read letters on a screen and then close up on the paper. I memorised the sequences and the first few sentences. I thought I'd better admit to that in case it skewed the results. So we kept changing the script up while changing up the slides on my eyes. We finished up with a picture of my eyeballs looking like planets. Magic. No wonder it costs so much to get your eyes tested.

Frames, lenses, coatings, screenings - the choices were bewildering and also when I did the maths I didn't have the money for actual glasses (and who, anyway, spends money on themselves?) so I bought the least hideous rectangle-ish plus-ones from the chemist's and tried to remember to carry them around with me. Which worked very well for a while. And anyway, at least I have those options. A 2018 survey estimated that about 2.5billion people - mostly in India, Africa and China - probably need specs but can't even get the eye tests let alone think about what frame range to buy into.

I feel very much like my grandfather peering over his half-moons whenever I'm reading or typing. Which is, it has to be said, a lot of the time. Which is, of course, part of the problem. Less time outdoors equals more myopia in the world.

Earlier this year I decided to actually adult and upgraded to actual specs - I had a moment when, at a gig, I could either see the words on the page (glasses on) or the audience (glasses off). Pushing $20 eyewear up and down four or five times a minute scratches and bends it really fast. And I was kind of persuaded that "making do" was a false economy and since all economies are false I shrugged and went along with it when the pin pricks/windpuffs/slides said my glasses should be progressive, which I thought was a synonym for advanced but feels a lot like its antonym instead.

Glasses are not the intelligence-booster I was hoping for. Nowhere in my idealised myopia could I not read in the bath because of glasses-fog. Ditto getting things out of the oven. I'm not smarter. Or more ugly. Or in any way spectacular. I cannot roll out of bed and check my phone. The small print is still out to get me. Things are clearer but also a lot less clear.

*From Isaac Asimov's essay "The Cult of Ignorance".

In hindsight, there were years of looking dangerously, without Sigourney Weaver.

• The Harry Palmer. Black, hornrimmed, adjusted while wearing them in the Fact and Fiction Section.