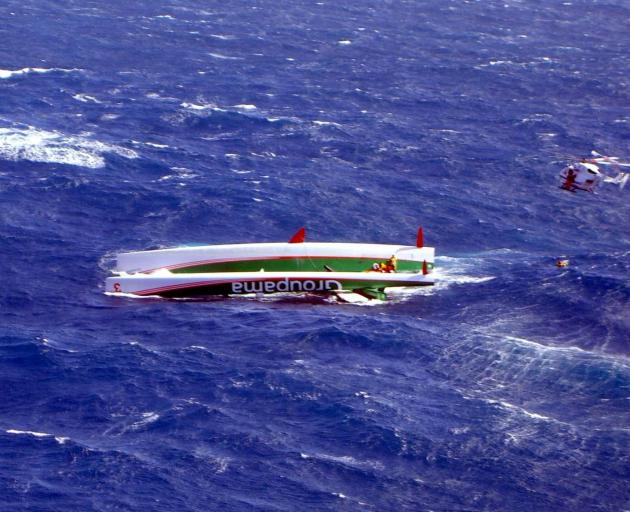 A Helicopters Otago aircraft approaches upturned trimaran Groupama 3 about 145km off the Otago coast in 2008, to help rescue its French crew. PHOTO: LION FOUNDATION RESCUE HELICOPTER
Every so often a rescue goes off without a hitch.

The crew steered north, 80 nautical miles east of Dunedin, where the vessel was hit with swells of up to 7m and winds exceeding 40 knots.

The ship began to break apart.

The trimaran flipped, then an area of the port hull broke, followed by the cross beams.

Within 10 seconds the boat was capsizing.

The Rescue Co-ordination Centre New Zealand received a call at 1.20pm from its counterpart in France, reporting it had picked up an emergency signal from the vessel.

The police paged the Dunedin Marine Search and Rescue squad and a helicopter was loaded with squad members Seth McPhee and Mark Whelan.

When the crew arrived at the scene, two members were lowered down into the water on a winch and swam to shore.

One of the rescue squad would prepare the yacht crew for recovery, while the second secured them to the winch to be lifted up to the helicopter. Five of the crew were rescued this way.

When the second helicopter arrived, Snr Sgt Benn convinced four more crew members to jump into the water where they were rescued. The final crew member was recovered by the third helicopter.

At 4.07pm all members of the crew were declared rescued.

They arrived at Taieri Airfield at 4.30pm, where they were dried off and given a hot drink before being processed by customs.

Mr Leck reported that Snr Sgt Benn later received a call from the crew, who were drinking wine in the Octagon in Dunedin and ‘‘looking at nice girls’’.

The night before the crew departed they treated the volunteers to a barbecue and some French wine salvaged from the yacht.

The wreck was towed into Dunedin and loaded on to a cargo ship full of onions bound for France.