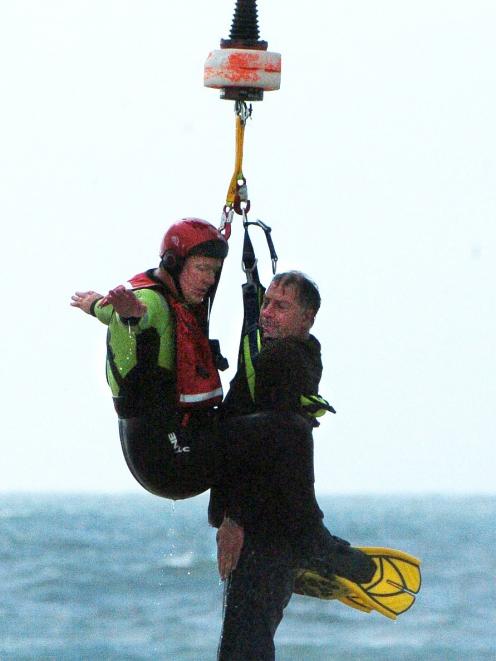 Greg Clark is rescued by Dunedin Marine Search and Rescue squad member Paul Sharp from the surf off Taieri Island after the boat he was in overturned while crossing the bar at Taieri Mouth in 2010. The bar has been a regular spot requiring the attention of water rescue squad members over the years. PHOTO: GERARD O’BRIEN
For almost 50 years, rescues on Dunedin waters have been conducted by passionate volunteers who give their time and expertise to save lives. Previously untold accounts of their daring rescues were documented by former secretary and treasurer Rowan Leck, who died late last year. Reporter Wyatt Ryder took a look at Mr Leck’s magnum opus.

After Rowan Leck’s death in November, an unfinished 100-page history he wrote about Dunedin Marine Search and Rescue has gained something of a new life.

Mr Leck, who worked on the piece for years, had submitted it several years ago to the group as its official history, however the work was considered a bit too editorial and required editing, so was sent back.

While it was widely agreed the passionate search and rescue member may have inserted a little too much of himself, the tales of daring rescues and timelines of the group’s progress over the years were acknowledged to be largely accurate.

The work was no mean feat and members of the group, keen for the stories the work contained not to be lost in the annals of time, are eager for the history to be shared.

In 1985 he became surf life-saving delegate to Dunedin Marine Search and Rescue and spent the next 20 years dedicated to that pursuit.

He was still serving on that committee in 2015 when he received a New Zealand Search and Rescue Council Certificate of Achievement from then Governor-General Sir Jerry Mateparae.

At the time he talked extensively about his passion for the organisation and its purpose, mostly referring to it as a team effort.

‘‘I'm still involved — I'm a little bit slower after a triple bypass and organ failure. I've retired from getting my feet wet and now I do a lot of the administration work,’’ he said.

A life member of Dunedin Marine Search and Rescue, he cited his biggest achievement as helping set up the helicopter Water Rescue Squad, in 1994.

The Water Rescue Squad was a specialist group within Dunedin Marine Search and Rescue that conducted aerial rescues.

His history covers the foundation of Dunedin Marine Search and Rescue through to 2017, with first-hand accounts of some of Otago’s most significant rescues.

He reported 476 people had been assisted to safety, 30 bodies were recovered and not one life had been lost after Dunedin Marine Search and Rescue were called to respond.

The organisation was established as a means of organising local forces who could assist in the rescues.

Police had no organised list of people who could be contacted for help in a marine emergency, nor did they have the resources to conduct their own searches.

People around Dunedin had the knowledge and equipment to save lives and Dunedin Marine Search and Rescue gave them one umbrella group to act under.

The group sacrificed a lot and were called out at all manner of times.

Members walked out of movie theatres, asked neighbours to handle children and in one case left a wedding, Mr Leck wrote.

Mr Leck recorded the Easter Sunday of 1996 as one of the busiest days in operation history, with seven alerts between Oamaru and Owaka.

Volunteers had to organise their lives around where their equipment was and take it with them wherever they went.

They were exposed to all manner of situations and it often took quick thinking to conduct rescues, he wrote.

Improvisation was a consistent theme throughout rescues, with reports of rescuers hooking up motorcycle batteries to lights to create mobile spotlights and crayfish pots being cut into rope to use in a rescue.

Senior Sergeant Brian Benn said the influence of Dunedin Marine Search and Rescue had started to fade in recent years, but police still consulted with the group regularly.

The organisation was actively involved in rescues and the water rescue squad was still a highly valuable resource for search and rescue efforts today.

Mr Leck had more passion than anyone he had ever met and a remarkable ability to put that passion into action, which resulted in many lives saved, Snr Sgt Benn said.

The written history exemplified that passion and the stories it contained deserved to be shared.

He planned to make a copy available at the Dunedin Public Library soon.