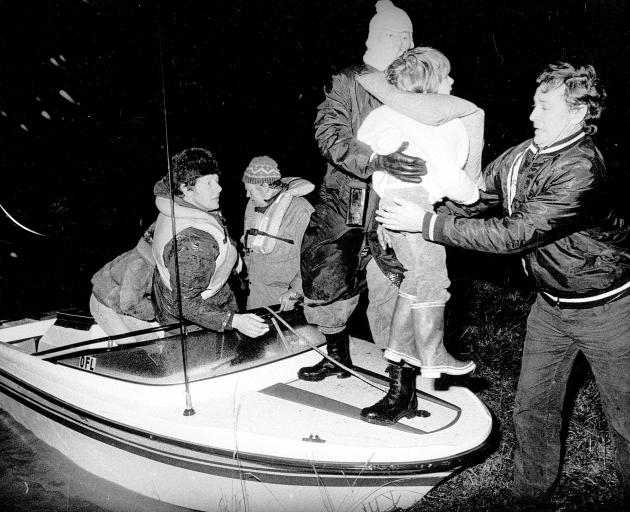 A child is rescued by search and rescue team members using a jet boat when the Taieri River flooded in 1980. PHOTO: ODT ARCHIVES
Dunedin Marine Search and Rescue was instrumental during the 1980 flood on the Taieri, rescuing many people from their homes.

Mr Low flew in the net to assist people into the net safely.

Mr Ashworth manoeuvred the net between amacrocarpa hedge and the windowlevel of a house, where two people needed to be rescued.

Despite being instructed not to bring anything with them, one of the people threw a suitcase into the net and climbed on in.

Mr Ashworth, feeling two separate weights from the cockpit, believed everyone was in and it was time to leave.

Rescuing people during the 1980 Taieri Flood are Terry Low and Alan McNaughton as Rowan Leck carries an unknown woman. Photo: Taieri Herald
Mr Low had no radio to contact Mr Ashworth with and the helicopter took off.

It was only after Mr Low repetitively hit the bottom of the helicopter that he caught the attention of Mr Ashworth, who then returned to rescue the second person.

Jet boats were also used to rescue people during the Taieri flood, which came with their own complications.

Skipper Kevin Bartlett directed the rescue boat to the front window of the Henley Hotel for a woman to climb on to.

With her feet on the window sill, the woman grabbed hold of the boat and ‘‘Kevin forgot that for every force there is an opposing force’’, Mr Leck wrote.

The woman pushed the boat away from the building and was stuck for a brief moment, stretched out between the window and the boat, before finally splashing into the water.

The woman ‘‘recovered no worse for the dunking’’.