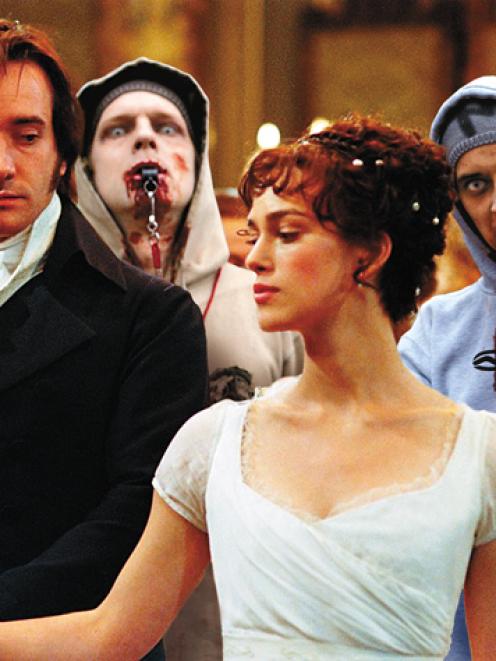 Actors Matthew Macfadyen and Keira Knightley in a scene from the film Pride & Prejudice, with zombies added. Image by Hayden Smith.
The undead are shaking up the insular world of Jane Austen, reports Monica Hesse, of the Washington Post.

As you may have heard, Pemberley has been overrun by zombies.

The news was announced in the recently released novel, Pride and Prejudice and Zombies, which recounts the struggle of Elizabeth Bennet and her sisters to simultaneously annihilate the undead invading their idyllic community and to marry well.

Were it just the zombies, the Bennet sisters would surely triumph, armed as they are with advanced weaponry knowledge and Shaolin martial arts training.

Unfortunately, aliens, vampires and dragons are also about to descend on the village.

The glowing reviews of Pride and Prejudice and Zombies prove the public will accept anything in the Jane Austen spin-off genre.

The question is why these silly, campy things work so well.

"It is a truth universally acknowledged that a zombie in possession of brains must be in want of more brains."

The first half of that line is Austen's; the second half is California author Seth Grahame-Smith's.

That is pretty much how the whole book reads: The Bennet sisters are minding their own business when all of a sudden reanimated human corpses stagger into the setting.

Darcy says rude things, Jane and Mr Bingley dance, and then: "Unmentionables poured in, their movements clumsy yet swift, their burial clothing in a range of untidiness.

Their flesh was in various states of putrefaction. ...

As guests fled in every direction, Mr Bennet's voice cut through the commotion. `Girls! Pentagram of Death!'."

"In the original Pride and Prejudice, there are so many things suited to make it into a horror," Grahame-Smith insists.

For example, in Austen's work, Grahame-Smith says: "There's a regiment of soldiers camped out in Meryton for apparently no reason.

It's not a big leap to say that the regiment is there to burn coffins and kill zombies."

In Pride and Predator, a screenplay recently picked up by Rocket Pictures, Austen's beloved characters are terrorised by a ruthless alien who lands on Regency-era Earth.

"We've seen Will Smith and Arnold Schwarzenegger and Tom Cruise take on aliens," screenwriter Will Clark writes in an email from London.

"It's time to see if the likes of Judi Dench, Alan Rickman or Emma Thompson can handle themselves, too."

Austen herself becomes the monster in Jane Bites Back, a novel by Michael Thomas Ford that will be published in 2010 by Random House.

In it, Austen is a frustrated vampire and bookstore owner.

"She's been middle-aged for 200 years, which is not making her happy," Ford says.

Charlotte Bronte has also received some of this dubious adulation - check out Sharon Shinn's Jenna Starborn, aka Jane Eyre, on a remote, futuristic planet - but Bronte's works, and those of other beloved authors, have not been morphed and mutated to half the extent that Austen's have.

Part of the reason for that is the bottom line.

"I was talking to my agent one day," says Ford, describing the origin of Jane Bites Back, "and one of us made the comment that the only things that seem to be selling are Jane Austen and vampires."

Part of it is the almost fanatical relationship some people have with Pride. (See: Lost in Austen, a new movie in which a modern woman wakes up and realises she has become Elizabeth Bennet.) Pride and Prejudice and Zombies, impossibly, works in part because of story lines like the one developed for Charlotte Lucas.

In Austen's Pride and Prejudice, Lucas is a pragmatic soul who marries for financial security.

In Grahame-Smith's book, Lucas gradually transforms into a zombie, though no-one notices.

The beauty of this side plot is that it is true to Charlotte's resigned character.

Austen drew her so completely that we know she would bear her zombitude with quiet grace and that her idiot husband would miss it entirely.

Austen's use of language helps, too.

"People in this period never really said what they meant," says Grahame-Smith.

Austen's characters are simply too mannered to gush about their feelings.

As a result, "there's a level of complexity and subtext that's at work through her novels," says Susan Ford.

Readers must fill in the gaps for themselves.

But for a Jane Austen fan, the gratifying aspect of reading Pride and Prejudice and Zombies is not the comic bloodthirsty additions, but rather how they highlight the humour that already exists in the original Pride and Prejudice.