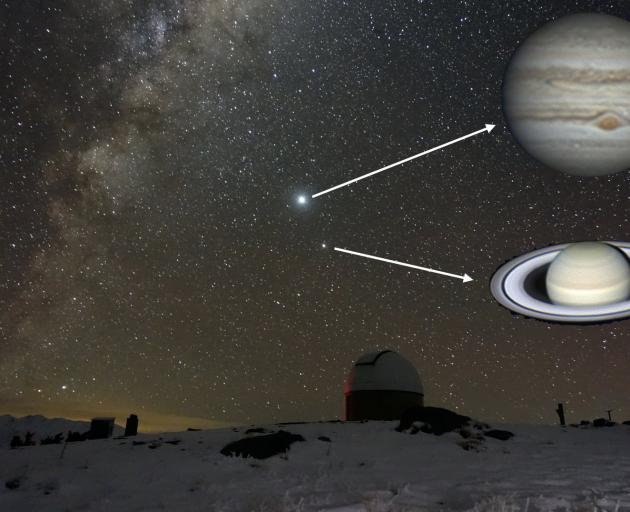 A composite of a wide field view showing Jupiter and Saturn in the sky with close-ups taken through one of the telescopes at the University of Canterbury's Mt John Observatory. PHOTOS: IAN GRIFFIN
This week, as the sun sets in the northwestern sky, Jupiter rises in the southeast. You can't miss the biggest planet in the solar system. To the unaided eye, it looks like an incredibly bright yellow-white "star", writes Ian Griffin.

As the sky darkens, the giant planet ascends. You will notice another relatively bright "star" six degrees below and to the right. This is Saturn, shining 14 times less brightly than Jupiter.

The planetary pairing occurs in the constellation of Sagittarius. The planets are visible for the whole night, appearing almost overhead after midnight. The next month is prime observing time for these gas giants. If you have a telescope, it's worth dusting it off to get close up views.

Jupiter is the closer of the two heavenly bodies. This week it is 619,000,000km away. Even small telescopes reveal incredible details such as spots and festoons in the planet's atmosphere.

If you want to see something special, in the early hours of Monday morning, look out for the shadow of Io crossing the planet's disk. Io is the innermost of Jupiter's four largest moons. The so-called shadow transit begins at 1.02am and ends at 3.19am.

Saturn is more than twice as far away than its larger sibling. It is more than 1.3billion kilometres from Earth. It boggles my mind that the reflected sunlight I see when viewing Saturn, travelling at the speed of light, has taken just under 75 minutes to traverse the solar system before hitting my eyes.

Another fascinating fact about Saturn is that with a mean density of 0.687g per cubic centimeter, it is less dense than water. If you could find a bathtub big enough, it would float! Astronomy has many ways of making you seem insignificant. 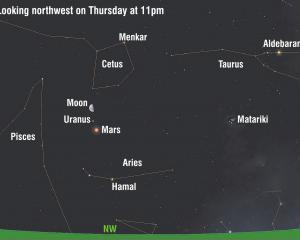