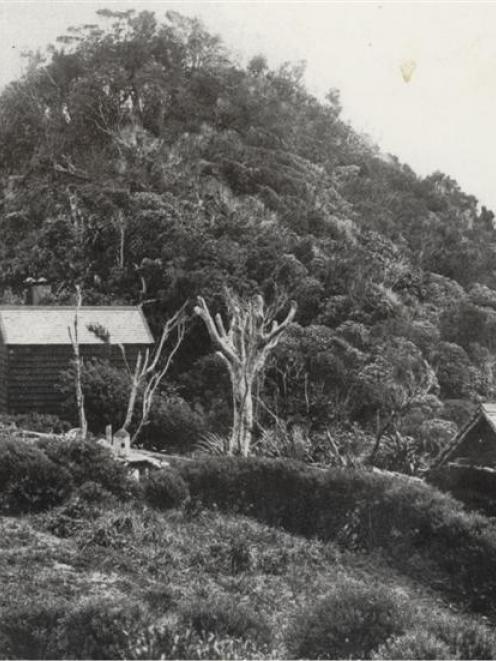 House belonging to early Fiordland explorer Richard Henry.
Many of us tend to believe European settlement of New Zealand began seriously in the 1840s, following the efforts of a few remote sealers and ship deserters. It actually took place many years earlier, as Peter Owens explains in the first of a two-part installment.

The first European settlement in New Zealand, the first constructed dwelling, first shipwreck and the first recorded earthquake all took place in the last decade of the 18th century.

Even more astonishingly, perhaps, these historic events all took place in remote Dusky Sound, in Fiordland.

Indeed, the launch of the first sea-going vessel built entirely from local timber in either Australia or New Zealand also took place in Dusky Sound in that same period.

Over the years, very little has been made of these significant events for multiple reasons.

One is that the first settlers were not very interested in settling and wanted to be away from the place as quickly as possible.

Another reason is the way in which the events were recorded.

Ships' captains, while obviously skilled in their seamanship and man management, were not as skilled with the pen and what would be of interest to a modern reader was often recorded briefly or not at all.

It is also interesting to note that public servants in the 18th century were just as anxious to cover their rears as they are today.

To understand how Dusky Sound became the scene of notable events in our nation's beginnings it is necessary to look at the Pacific in the 18th century.

If ever there was a truism it is the old saying that trade follows the flag.

The Dutch had been trading out of what is now Indonesia for more than 200 years but within a few years of Cook's third voyage, the East India Company had a royal warrant for exclusive British rights to trade in the southern seas.

The loss of the American colonies forced the British Government to look for another dumping ground for its surplus proletariat and New South Wales was chosen as a convict settlement.

Once this was established, the East India Company flourished its royal warrant.

Although there was a local governor who had proclaimed New Zealand out-of-bounds to British vessels, the East India Company carried more punch than any such public servant and issued a licence to land in New Zealand to Enderby and Company, a British company with a large base in Bombay, the main Indian commercial centre.

Enderby and Company had received in 1791 a three-year licence to trade in the southern seas. It transported convicts and livestock from England to Sydney, but its principal, John Enderby, had an eye for trade.

He knew there was a strong demand for sealskins in China and that both Cook and Vancouver had reported a vast seal population in Dusky Sound.

In October 1792, Enderby's vessel the Britannia left Sydney after discharging cargo from Bombay. A syndicate of British officers stationed in Sydney had chartered the vessel.

The captain, William Raven, was charged with buying livestock in the Cape Colony and transporting it back to Sydney.

While the officers were the gratin of the fledgling colony, good food was scarce for everyone on that fatal shore.

Raven had been instructed by his masters to land a sealing party at Dusky Sound and this fresh commission fitted in well with his instructions.

The Governor of New South Wales gave special permission for Britannia to call at Dusky Sound.

(It is probable that such was the standing of the East India Company, that Raven was going there anyway.)

Accordingly, he sailed away from Sydney on October 23, 1792 and entered Dusky sound on November 6 after a rough crossing of the Tasman.

Anchoring in Facile Harbour, Captain Raven chose Luncheon Cove on Anchor Island as a sealing base.

On November 14, everyone turned to the construction of what turned out to be the first permanent European dwelling in New Zealand.

This was to house the sealing party of 12 men (one who was to be the base carpenter) and a cat. It was a quite large building, Raven recording it as being 40 feet long, 15 feet wide and 15 feet tall.

It did not take long to build and on December 1, 1792, Britannia sailed away leaving not only the first sealing party in New Zealand but also the first permanent dwelling.

Before leaving for the Cape of Good Hope, Raven did something rather unusual.

In leaving 12 months' provisions and stores for the sealers led by his second mate, William Leith, Raven also left with them ironwork, sails and cordage.

He told Leith he expected to return in about a year, but to guard against contingencies, he instructed him to construct a small vessel.

Seven months passed and Britannia returned to Sydney with its cargo of livestock. Raven had not forgotten his company's sealers and was planning to recover them.

However, such was the dire shortage of food and other necessities of life in Sydney, Raven was once again chartered to ferry supplies from Bombay.

Of course, not only Enderby and Co but also the East India Company, would have received a consideration on both the goods and transport and Raven accepted the charter.

However, he was not entirely heartless and once again broke his journey at Dusky Sound although it was well off the most direct route to India.

It appears the governor of New South Wales, having pressed Raven into his service, may well have feared repercussions from the powerful East India Company if anything happened to its client company (Enderbys) seamen/sealers or (or more importantly the seal skins).

Once again, the Tasman was stormy and the two vessels lost contact.

However, Britannia, on reaching Dusky Sound on September 8, 1793, found the entire party and the cat had survived the winter well.

Not only had they accumulated and salted down 4500 sealskins, but they had also built a small vessel with a 46-inch keel, 35-feet deck length with 16-feet, 3-inches extreme breadth with a 12-foot hull, Raven reported the only other work to be done was a day's caulking by three or four men.

He also reported that the timber from which the entire vessel was constructed was spruce fir, which we now know as rimu.

They were anxious to be gone and so was Raven.

Abandoning the unfinished vessel, Britannia sailed from Luncheon Cove on October 9, 1793, but could not sail out of Dusky Sound.

While waiting for fair weather at Facile Harbour, a party from the sealers sailed a small boat back to Luncheon Cove to recover the cat, which had been left behind in the scramble to leave the settlement.

On arrival, they found Francis at anchor as well as the abandoned cat.

(It is one of the many strange coincidences in the history of Australia and New Zealand that both the first two seagoing vessels built in those two countries were in Dusky Sound at the same time.

While Francis was constructed and launched in Sydney before the vessel built in Dusky Sound, its hull had been shipped from England and it was finished in English oak.

The Dusky Sound vessel was the first in the two countries to have been designed and constructed locally with local timbers.)

However, the cat having been recovered, Francis was quickly repaired from Britannia's greater technical and expert resources.

On October 31, 1793 both vessels sailed away rejoicing, Francis back to Sydney and Britannia to Bombay via Norfolk Island.

So closed an important chapter in the European settlement of New Zealand.

Another much more colourful chapter was about to open and both the unfinished ship at Dusky Sound and the redoubtable Captain Raven were very prominent in what was an almost incredible passage in our history including both high drama and high comedy!