Settling on just the right mix 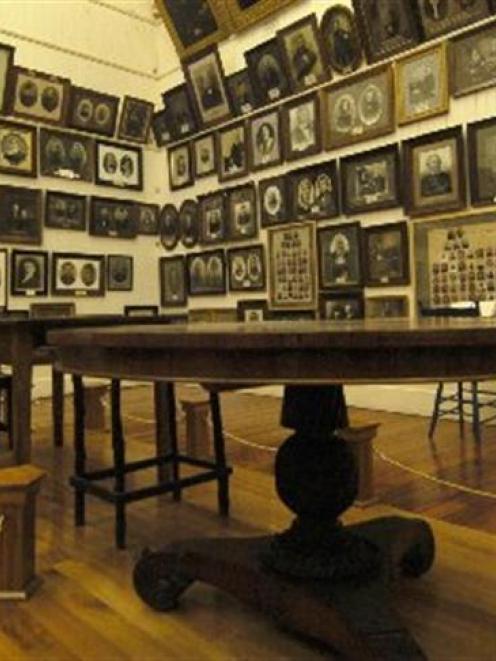 The Smith Gallery at the Otago Settlers Museum. Photo by Peter McIntosh.
Historians have often made assumptions about the character of early immigrants to New Zealand but a new book, Settlers: New Zealand immigrants from England, Ireland and Scotland 1800-1945, sets out the results of research through old records and tells a different tale.

New Zealand's history is both complicated and exciting because so much went on here so rapidly, Dr Terry Hearn says.

A professional historian and consultant on topics as diverse as the way the Crown treated its Maori subjects after the Treaty of Waitangi, to histories of the gold-miners and immigration, he is co-author with Dr Jock Phillips of Settlers: New Zealand immigrants from England, Ireland and Scotland 1800-1945.

The project started because of Dr Phillips' interest in the wellsprings of Pakeha culture.

Now general editor of "Te Ara: Online Encyclopedia of New Zealand", he was then New Zealand's official historian and realised we couldn't really begin to understand that culture until we understood who came here.

Earlier immigration studies had looked at assisted immigrants because information on ships' passenger lists was available, but getting information about general immigrants was more difficult, according to Dr Hearn.

He became involved because he had used registers of deaths and other sources to build up detailed profiles during his research on gold-miners.

Those techniques were applied to the general population as the authors were given unlimited, but not unqualified, access to all the New Zealand death registers.

"These were held in a windowless bunker in Lower Hutt, and we were locked in and had a single electric lamp and a table and a noisy air-conditioner.

"It was really trying but in the end, we extracted the details of more than 11,000 people in order to give data sets that were large enough for us to be confident about the results. It was like sitting in the national whakapapa," Dr Hearn said.

Although they were not allowed to use personal names, the historians were excited to see unexpected patterns emerging.

The big surprise was the under-representation of the English, and the marked changes in regional origins through the century or so they examined.

"There are distinct regional groups and regional cultures, and we wanted to try to unpick New Zealand's immigration history to find out who had come, where they had come from and, therefore, what kind of cultural baggage they brought with them."

While many of the early English immigrants came from the south, later in the 19th century they came from the industrial areas in the north, from Yorkshire and Lancashire, and they brought new traditions and pastimes, such as rugby league.

"In those big industrial areas of northeast and northwest, big transnational shifts were going on.

"A lot of the heavy industry we associate with the Industrial Revolution was actually shifting offshore to the US and across to Europe, and towards the end of the 19th century and early 20th century, the British were looking for different forms of industry and enterprise.

"Now, of course, it's shifting again, to east Asia. These things all happened before and will happen again. Some of the big industries like textiles, iron and steel migrated first, and we've seen that happen again - from the US to east Asia.

Not everyone who came to New Zealand stayed, but few returned to the UK, probably because of the cost. Instead, people flowed across the Tasman and back again, as they do today.

Many immigrants did not come directly from the UK but had been through Canada, South Africa or Australia before finally settling here - such as Norman McLeod and his group of Scots who came via Nova Scotia to Waipu in Northland.

"I think some odd assumptions have been made about the English. They are less English than they appear, because a large number who appear to be English actually came from the southwest; again, the Celtic fringe.

"The English, even if you include those from the southwest, are actually a smaller proportion of the New Zealand immigrant population than they were of the UK population, whereas the Scots are over-represented and the Irish are about the same proportion as in the UK."

A major surprise was that Irish immigration was more complicated than previously thought, Dr Hearn said.

"Initially, a lot of the Irish in fact were Anglo-Irish who came from the Leinster area - Dublin - and these are the folk who were under pressure as a result of the emancipation of the Catholics. These were the people who looked on themselves as empire builders, the military men and the bureaucrats.

"They arrived in Australia and here in New Zealand, and some of those men played a very prominent part in early governments here. Then it changed, and those who came with the gold rushes were primarily of Gaelic Irish Catholic origin."

More Irish and Highland Scots moved to Canterbury than most people realised, and Southland also had a significant Irish community, he said.

It was not always clear why particular groups came to New Zealand, although once someone from a particular region emigrated, they would persuade family and friends and neighbours to join them. Once a certain stream was established, those streams tended to become self-perpetuating.

Dr Hearn and Dr Phillips found some detailed family histories of great help, as they were able to pick up examples of people from particular areas and generalise from them about what had gone on.

They think this book will give those researching their family histories a broad context to see where their particular experiences fit.

"This research tells us we have quite mixed national and regional origins; it tells us we were drawn from particular strata of those national societies, mainly broad middle-class on the lower side.

"It tells us those who were drawn here were drawn predominantly from the pre-industrial sectors of British economy: farm workers, tradesmen generally, very few industrial workers," Dr Hearn said.

"And in terms of religious affiliation, we are quite distinctive, in the sense that there is a very strong non-conformist element in New Zealand, and from those people were drawn some of the institutions that flourish to this day; secular education being one.

"These were the people - Methodists, Wesleyans, Quakers - who drove the movements for votes for women, the temperance movements; there was even a non-conformist element that came in from Ireland, and a strong disposition for social reform and that shone through."