Sniffing out the skinks 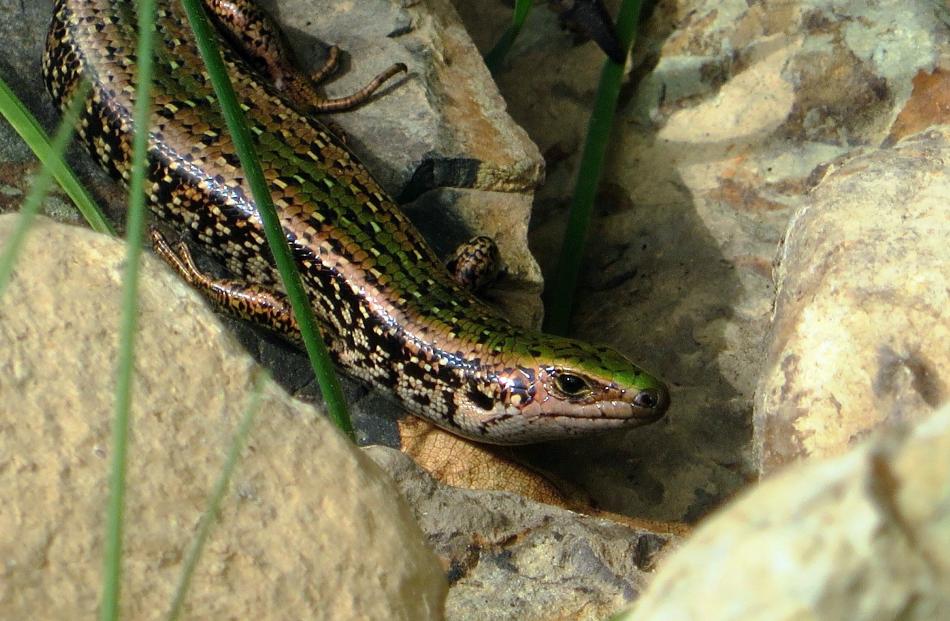 The green skink was introduced to the ecosanctuary a year ago. Photo: Carey Knox. 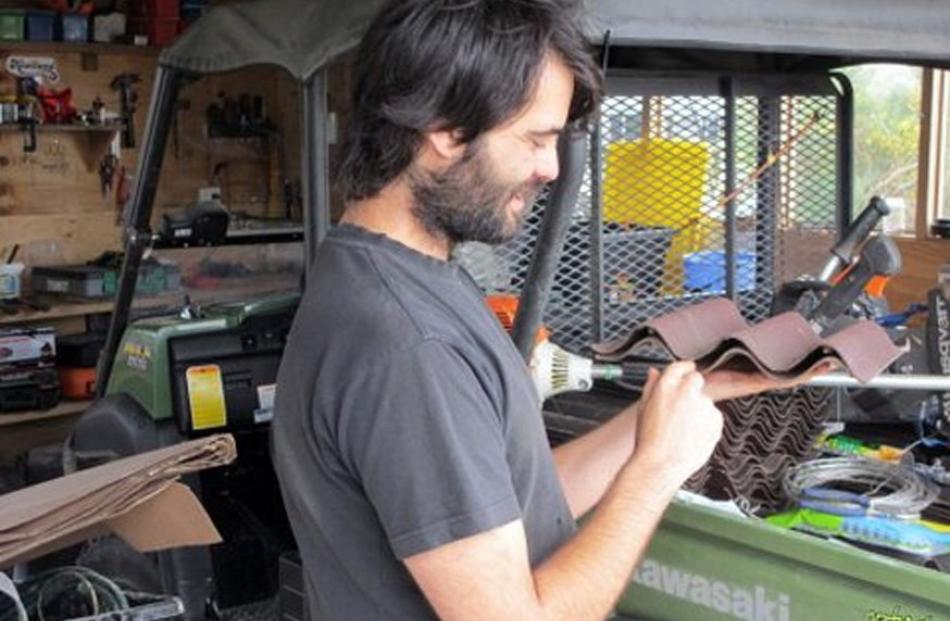 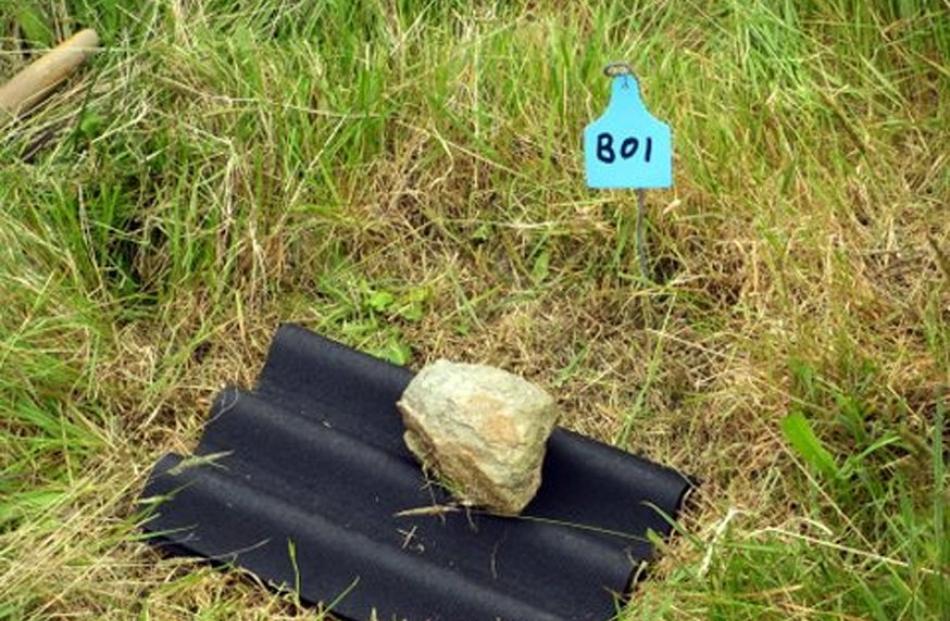 The first ACO installed as one of a line. 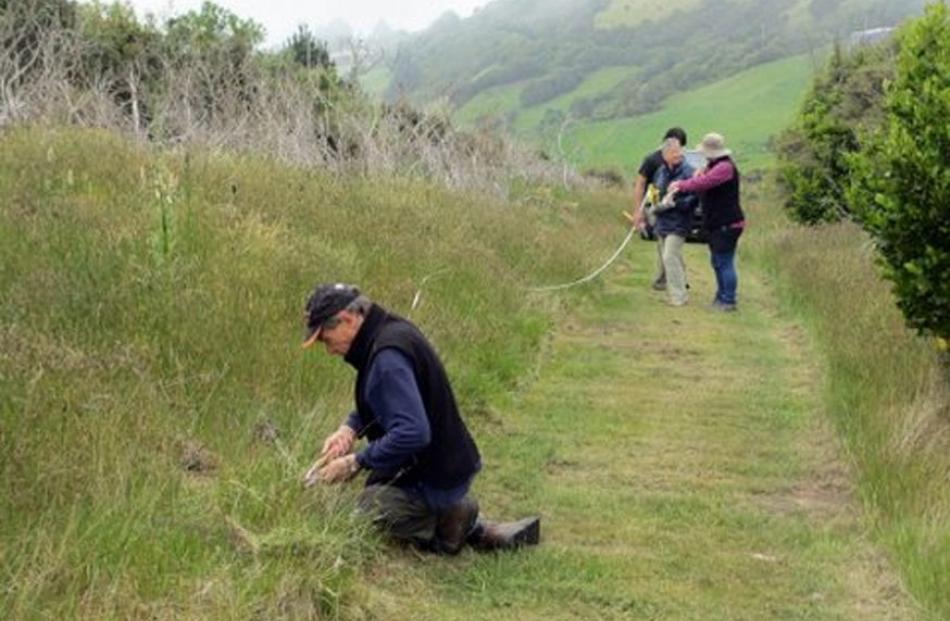 The volunteer team measures out the distance between each artificial cover object.

A team of dedicated volunteers is carrying out a research project into Orokonui Ecosanctuary’s lizards, reports Alister Robinson.

There is more than meets the eye of the average visitor to Orokonui Ecosanctuary. Mostly, visitors focus on the birdlife there, and are rightly blown away on meeting rare and endangered species such as the takahe. However, Orokonui is not just about rare species, but about learning about our ecosystem as a whole.

The Orokonui valley was selected for the sanctuary because it was known that there were already many native species surviving well there. It held promise that with care and protection its ecosystem could be restored to something approaching what it was in pre-human times, allowing many of the species that had disappeared as the consequence of human impact to be returned. Much of that has already happened. The translocations of kaka, kiwi, robins, jewelled geckos, Otago skinks and tuatara have been followed with a lot of public interest. But notwithstanding the excitement and satisfaction of settling these returnees in and seeing them thrive, much remains to be learned about the creatures that were already there. About the lizards — the skinks and geckos — that might have quietly been residing there, nothing was known.

In 2014 a University of Otago researcher, Bastian Egeter, applied to the Department of Conservation and received permission to conduct an ongoing survey of the sanctuary looking for skinks and geckos. He devised a methodology that could be implemented by non-specialist volunteers and that over time would provide information about the kinds and numbers of lizards present. In the past three years a few dedicated volunteers have been monitoring the changes in the populations of common skinks and geckos in the sanctuary.

Each year in October 11 lines of 10 "artificial cover objects" (ACOs) are laid out on the ground in a variety of areas in the sanctuary.  These are essentially small pieces of corrugated roofing material in a double layer that attract the lizards as protective cover.

Every two weeks through to March, these are inspected by volunteers to see who has taken up residence. While one volunteer lifts the upper layer of corrugated material, another stands at the ready to photograph any lizard that may be enjoying the warmth and shelter of the ACO. While the volunteers have quickly learned to recognise the common species, the photograph enables identification of any more unusual species.

The results in the first year were not particularly exciting and over the six months only one common gecko and 13 common skinks were recorded.  However, in the year 2015-16, using the same transects and methodology, we found 57 skinks but no geckos. This was promising from the skink perspective but disappointing that no geckos were found and no other species.

This season, 2016-17, which finished in early March,  the skink capture  had jumped up to 127 and this year we found four of the spectacular green skinks, which were only introduced to the sanctuary a little over a year ago, in January 2016. Again it was somewhat disappointing that only two common geckos were found.  We had also hoped to find some of the bright green jewelled geckos or even a young tuatara. But no luck.

The monitoring of the free-ranging skinks and geckos will continue for some seasons yet. Accumulating useful scientific data simply takes time. In the meantime, the conclusion we draw is that the common skinks are slowly recovering now that there are no predators about to eat their young.  Geckos, it appears, will take more time.

In October this year we will again set up the same lines and we can expect another good increase and perhaps we will see some of the less common species. Eventually, the project may be extended to find out more about the possible populations of lizards inhabiting the Orokonui forest.

Meanwhile, at a distance from any of the scientifically placed ACOs, an elegantly marked skink can sometimes be seen basking on a pile of rocks constructed some years ago as potential lizard habitat. It is an Otago skink, the largest of all our lizard species, that has somehow escaped the special enclosure, exchanging its accustomed schist habitat for common greywacke rocks.  Perhaps it is a loner who doesn’t enjoy the increasing numbers in the enclosure as new generations join those sunning on the schist. Whatever its motivation in giving up its special status and joining its more common fellows, we can see its presence in the wider sanctuary as a further small step towards the restoration of the ecosystem, integrating the habitual residents with the returnees. Who knows what next season’s volunteers might find!

- Al Robinson is an active volunteer at Orokonui, in the field and on Orokonui’s business board.