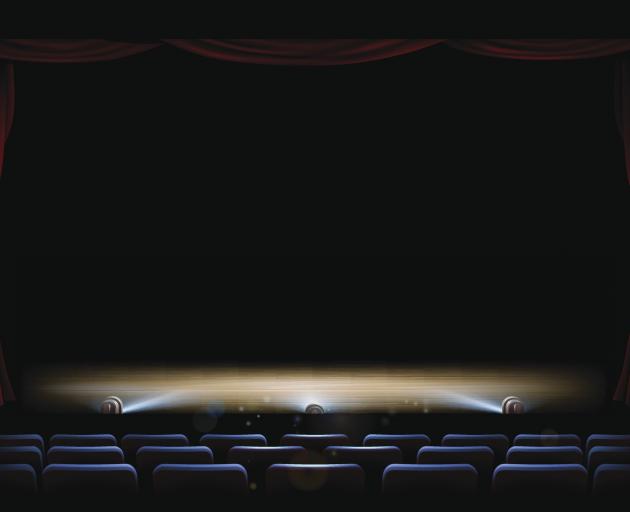 Photo: Getty Images
This is the start of panto week in the Upper Clutha, writes columnist Liz Breslin.

Since we’ve been going for three years now, I think it’s safe to start calling it a tradition.

And I love how theatre has so many phases of translation, of giving forward.

From the page to the director, through the actors to the audience.

I don’t remember the first time I went to the theatre, as an audience member or a participant. I have vague memories of being in a production of Mother Goose, making it up as I went along. There was a school play I nearly couldn’t be in, because chickenpox. I got over the infectious window and spent the whole run being teased as a "spotty sprite". When I went to see Jesus Christ Superstar, angels danced on the car bonnet all the way home.

Do musicals count as theatre? What about ballet? I was on stage that one time with the Royal Ballet in Japan. I had a broom, a hair net and very black eyebrows. I’m absolutely going to count that as a proper theatre experience.

Is pantomime itself actually Real Drama? People can be very snobby about pantomime. Take Robbie Williams, hardly a representative of the High And Mighty Arts himself, who said he was "proud to have an entertainment career this long" without "having to do panto". He’s totally done panto since saying that. Oh, yes he has.

The great thing about panto is that it doesn’t take itself too seriously; it pulls a bit of everything in. There will be dance. There will be singing. There will be that bit where everyone shouts "LOOK BEHIND YOU". Why do we do that? I still don’t know. But we do it because it’s always been done.

Though that is not always the case. Some things you won’t see in the Wanaka Pantomimers’ pantomimes, because, like all traditions, it is evolving and we are evolving it: tired, punch-down jokes, humour for the adults that leaves the kids uncomfortable, predictable storylines. I think that’s why director Gilly Pugh calls our offerings "antimime" instead. I love that.

And don’t think for a second that because it is fun and frantic, this antimime business is easy to do. Oh no. It’s not.

The cast are all juggling day jobs or school with a hectic three-week rehearsal schedule and a writer who doesn’t get last scenes in until the last minute. (Sorry team.) Performances are fast, furious, think-on-your-feet territory. They give so much to the community, the cast and crew, putting this together. They’re the best.

For audience members, pantomime is an excellent place to start with this theatre malarkey if you haven’t spent your life being a spotty sprite and broom girl, or playing Francis Flute the Bellows Mender, or choking with giggles over Rosencrantz and Guildenstern are Dead.

Also, it’s an excellent gateway drug to theatre if you want to indoctrinate your friends or family. And, in response to the most asked question this year, I can’t put up a convincing argument as to why it’s better than Netflix, because I think there’s room for both.

For the aptest of comments on the arts, I look, of course, to the poets. And 19th-century poet Leigh Hunt said this: “Not to like pantomimes is ... not to like love ... not to like a holiday ... not to remember that we have been children ourselves".

A bit of childhood. A bit of magic. A bit of panto. Together: Oh, yes we can!

Flute? A mechanical, in a wood outside Athens.
MDSM Night's Dream, surely.

I started in showbiz early: 9.

Upending a crate to suggest puppet theatre, I tied kewpie (fairground) dolls to long thin string, and stood behind the crate, manipulating the string, to describe, so I thought, a kind of dance.

Alas, I could not see the 'stage'. Audience called 'Keep going!'

The figures had fallen off, and only jerky string could be seen.