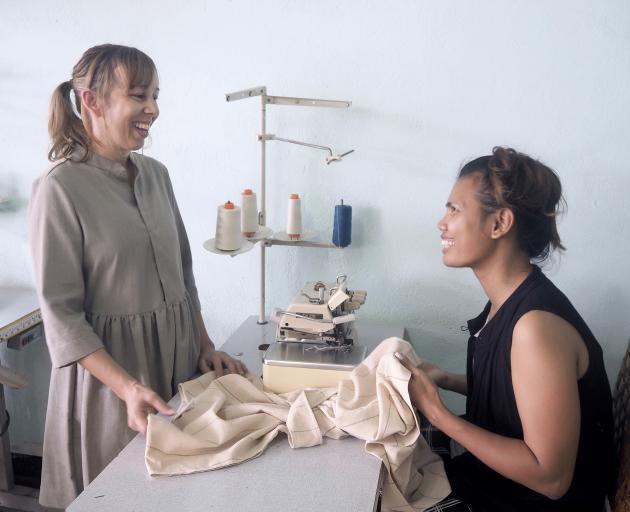 Erica Gadsby would be on a plane headed for rural Cambodia if it weren’t for Covid-19.

Instead, email and Messenger keep the Te Awamutu-based social entrepreneur in touch with the people who manage and sew her company’s clothes.

Gadsby is worried about the situation there. In rural Cambodia, she says, the

Covid-19 epidemic has intensified already significant challenges for people ill-prepared to cope. Food has gone up in price or is in short supply, there has been a drought and people are losing their jobs because of factory closures due to the pandemic. 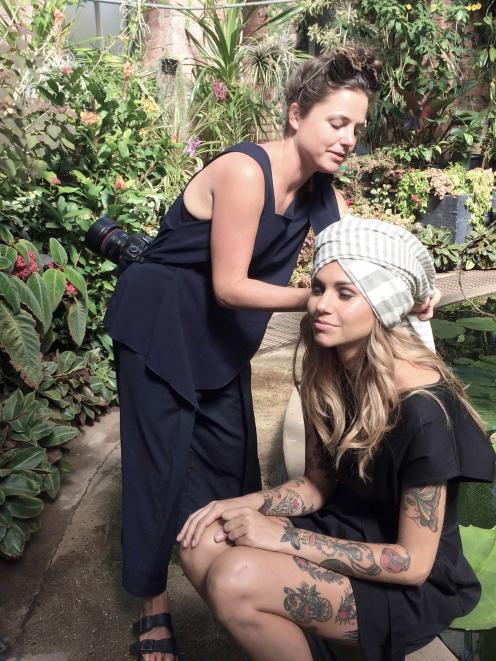 ReCreate's designer Marielle Van de Ven makes final adjustments before a photoshoot.
"They’ve talked about there being a wage subsidy in Cambodia, but from our first-hand basis, we don’t hear of many people that have actually seen that either."

Gadsby and her husband first connected with people in Cambodia while working with a non-governmental organisation between 2006-2013.

One of the poor rural communities Gadsby came to know during that time was Dey Tmey, meaning "New Land". Before 2007, members of the community lived on the edge of the Bassac River in the country’s capital city, Phnom Penh, she says. That is, until they were evicted as part of a gentrification drive.

"Now, where they used to live is just this shiny giant mall that people can’t really afford to shop at. It’s just for tourists."

Moving to the countryside, the Dey Tmey community had to start over, without homes or jobs, she says.

"I just learned to love the resilience of the people. I want to see better for them."

For mother-of-two Gadsby, helping the women of Dey Tmey became a personal quest.

UN figures show that rural women fare worst in developing nations, worse than rural men and urban dwellers. In part this is because women shoulder much of the domestic load, chores such as collecting water and fuel, gathering food and caring for children.

Without prior experience in the fashion industry, Gadsby launched her ethical fashion company ReCreate in 2013 to give skilled employment and fair wages to women in the community. Using donations from the charitable wing of their business, they bought their first sewing machines, she says.

Literacy training is part of the training package for most of their workers, she says.

In rural Cambodia nearly half of the women are illiterate, compared with 14% of rural men, UN figures show.

"If it ever came that they would leave working for us, we want them to take the trade and maybe they could start their own sewing business," Gadsby says.

Gadsby, who hails from Ashburton, has a degree in business studies majoring in entrepreneurship. 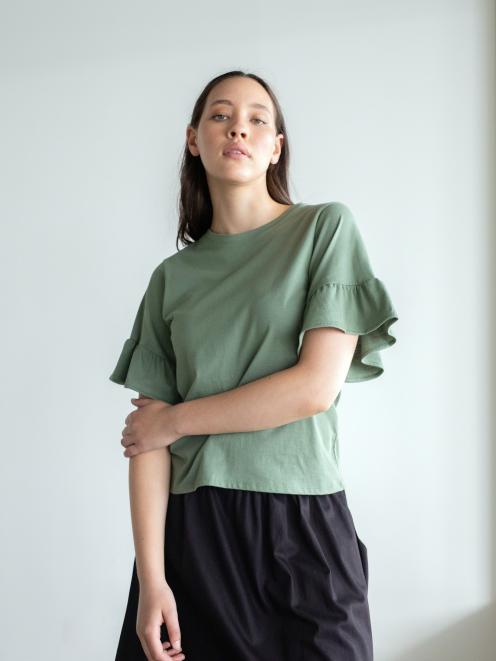 One of ReCreate’s designs.
"I’m quite passionate about the innovation side of business and the fact that you can use business to do good in the world, or make an impact."

The other side of doing good for Gadsby, is in the small ecological footprint of the clothing they create. According to UN figures, the fashion industry is responsible for 10% of all greenhouse gases and 20% of global wastewater.

Sustainability is a big part of what attracted designer Marielle Van de Ven to join ReCreate, as the other half of their New Zealand team. Having previously designed for New Zealand brands NOM*d and Karen Walker, as well as teaching at Otago Polytechnic, Van de Ven found out about ReCreate just as she was about to quit the fashion industry.

"I was quite happy to throw all of that away and do something that was aligning with my values. And then that’s when I heard about ReCreate. I heard about their story, and I was like, ‘Yeah, I think what you do is amazing!’. That was three years ago and I’ve never looked back."

ReCreate’s clothing ticks ample sustainability boxes, although Gadsby says box ticking is not what they are about. From day one, she says, sustainability has been embedded into their practice.

"I think it comes from the point of view, that if we’re working with people then taking actions that are damaging the environment that people live in, that doesn’t make any sense at all."

With just 13 dressmakers, their sewing centre in Dey Tmey has a degree of flexibility a larger factory doesn’t, she says.

"In a small facility we are trying to take as many little steps as we can to make sure we’re having minimal impact."

For example, cutting by hand means they can place the pattern on the cloth for minimal waste. Even the small offcuts get used, she says.

"We’ve done quite a good line of babies’ snuggly toys, with animals’ faces on them, to give away to people in the community that need them."

Some of the fabric they use is locally hand-woven and coloured with natural dyes but the bulk comes as raw certified organic cotton from Thailand. Cambodia doesn’t have a cotton industry while its neighbour Thailand has a certified one, Gadsby says.

Getting the garments to New Zealand involves the biggest slice of these garments’ carbon footprint. Although cargo shipping produces less carbon emissions per kilometre than planes, trucks or even trains, the emissions from a 9000km ocean voyage add up. It’s unavoidable, so carbon offsetting is the next best thing. ReCreate does this through DHL International’s GoGreen climate-neutral service.

Once ashore in Auckland, every garment ordered online is repackaged and sent to its new home in a reusable cloth bag, that’s shipped inside a plant-based compostable mailer, Gadsby says.

"We call them satchels."

People use them for all sorts of things, she says.

To date, everything from ReCreate is sold to New Zealanders, either online or through 28 stockists, including Hype, in Dunedin, and The Colab, in Queenstown. Plans to grow production by selling to distributors in Australia have stalled for the time being due to the pandemic, she says.

"Things are feeling so uncertain in Australia that no-one is wanting to make any forward movement at the moment. We’re really just focusing now on strengthening things in New Zealand."

Domestically, sales haven’t been negatively affected by Covid she says. In fact, during lockdown, direct online sales increased and continue to do well.

"Our wholesale is selling well above expectations," she says.

Gadsby would like to see more businesses adopt the social enterprise model for social good.

"I think that of all the things you can use business for, making money is a pretty boring reason. I like to see business as a tool for improving people’s lives, really."