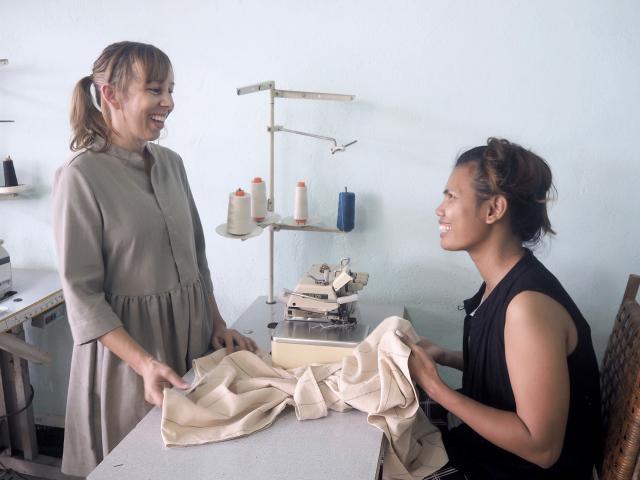 A New Zealand fashion company is caring for people and the environment.

Kiwibank 2020 New Zealander of the Year Jennifer Ward-Lealand walked into the Alternative Aotearoa conference feeling curious and came out filled with hope. Maureen Howard finds out why.

A system of regulated product stewardship for six "priority products" is coming into effect under the Waste Minimisation Act. Maureen Howard asks six waste minimisers what they're doing to make a difference.

Climate change is challenging the St Clair-St Kilda coastline and the protection measures of the past. Maureen Howard finds out what the Dunedin City Council is doing to adapt to nature’s ways.

Art can convey complex issues in a direct and intuitive way. Maureen Howard talks to school pupils about what they hope to communicate about the unequal effects of climate change at their exhibition.

How do you turn a notion into action? Maureen Howard talks to the people behind four inspiring community  initiatives transforming society from the bottom up.

Social entrepreneurs strive to address pressing social and environmental issues while creating economic opportunities. Maureen Howard asks six how they include doing good in what they do.

To move from "throwaway" to "no away" will require a system-wide change in how we use resources. Maureen Howard finds out why we are at a pivotal point.

We know walking and cycling is good for us and the planet, but it’s not always made easy. Maureen Howard talks to those sweating the small stuff to make it a viable choice.

Billions are being spent on Covid-19, but Govt money also needs to tackle ecological emergencies. Doing both can be good for jobs, communities and the economy. Maureen Howard finds out why.

The life in our streams and rivers has long helped us monitor their health. Now scientists are looking to it again — and in particular, macroinvertebrate life — to tell us whether pesticide use is bringing a new crisis.

Leaving fossil fuels unburned remains the first urgent priority of climate action, but protecting and restoring natural ecosystems will also be critical, according to a recent review of the scientific literature.

As our climate and ecological crises deepen, attention has been turning to viable and efficient ways to restore natural ecosystems. Maureen Howard talks to volunteers restoring native beech forest to slopes of Wakatipu Basin.

When it comes to sequestering carbon, New Zealand’s peatlands  are champions. Maureen Howard finds out why.

We still burn a lot of coal to ward off the cold and to fuel industry, despite the price in carbon emissions. But as Maureen Howard reveals, there’s a cleaner, plentiful alternative.

Grey hair and wrinkles are par for the course in farming circles these days. Maureen Howard talks to a new generation of organic market gardeners who have created a living by going local, small and...

We know the hoiho is in trouble. We know a shifting diet is part of the problem. But how does this knowledge help highlight hope? Maureen Howard looks to sea for answers.

Whether it is swales or community-owned electric vehicles, recent QSM recipient Dugald MacTavish is thinking of the future, writes Maureen Howard.